Traffic in the Philippines & your automatic transmission

Proper driving habits in traffic will help preserve your gearbox.

One of Philkotse’s readers, Iman Imani, previously wrote to us for advice on which Hyundai Tucson variant to get. He’s finally made his choice:

I don’t know how to thank you for the great help when I was choosing between the 2018 Hyundai Tucson GL and GLS. I already bought the GL diesel, and my unit will be released by next week. But there’s still one thing on my mind that still makes me nervous. To be honest, this is my first time to drive a car with an automatic transmission. I noticed that there are very different ideas about how to use an automatic transmission in stop-and-go traffic. Some say it is much better to keep the car in D mode if you’ll be spending less than 2 minutes at a stop light, while others say to put the transmission in N and hold the brake. I’m concerned about Hyundai’s system because it uses a dual clutch gearbox. I love my new car, that’s why I would really like to know how to best maintain it. Thanks a lot in advance.

First off, congratulations Iman on your purchase! The current-generation Hyundai Tucson is definitely a stunner in terms of looks, especially as it was designed by no less than Peter Schreyer, Chief Designer at Hyundai-Kia and one of the three top honchos at Kia Motors. Schreyer previously did stints for Audi and Volkswagen; his contributions to the first-generation Audi TT endure as a fine example of timeless automotive design, even two generations later. His 2006 transfer to Kia marked a crucial period of restyling for the Korean automaker’s model lineup, an advantage that extends to Hyundai after it acquired 51% of the company.

Since you managed to get the lower-spec GL variant, one benefit I failed to mention is that it gives you more flexible options to upgrade certain parts. The GLS might be the better-dressed version, but not everyone might appreciate the considerable price difference and the more upscale features shoehorned in all at once. Owning the GL variant puts you in greater control of your budget, as you get to choose which aspects of the vehicle you would like to upgrade.

Now that you’re about to enjoy your brand-new Hyundai Tucson GL, there’s one reality that’s bound to hit you like a ton of bricks: driving in Metro Manila traffic. And this brings us to your main concern.

So *how* do you use an automatic transmission in stop-and-go traffic in the Philippines?

1. Automatic transmissions in a nutshell

Since this is your first time to drive an automatic, here’s a little backgrounder: it’s a type of motor vehicle transmission that changes gear ratios by itself, in order to make the vehicle move forward.

If you’re already familiar with a manual transmission, then an automatic transmission has a very important distinction: it lacks a clutch pedal. This makes it more convenient for you to drive by removing the need to shift gears manually. For many drivers, it’s easier to operate an automatic transmission vehicle as it does away with having to strike a balance between the clutch, gas and brake pedals, especially in trying to keep the engine from stalling. 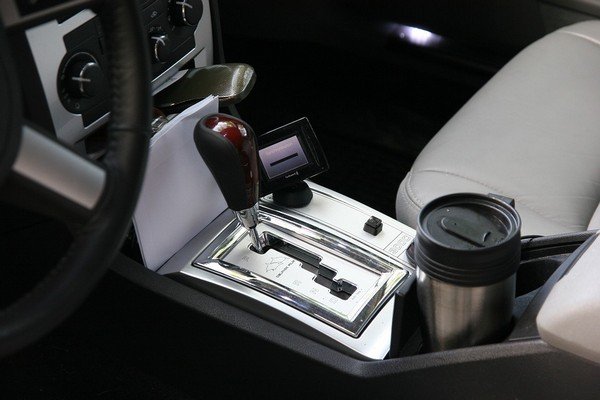 Automatic transmissions are known for their convenience

The most common type is the hydraulic automatic transmission, which uses a type of fluid coupling mechanism called a torque converter, in lieu of a mechanically-actuated clutch. Where a manual transmission normally uses different sets of gears to achieve the gear ratios necessary to move the car forward, an automatic transmission uses the same set of gears, through a system of planetary gears that are locked and unlocked with throttle input. The most common type is the hydraulic automatic transmission

Another type of automatic transmission is the semi-automatic transmission, also called an automated manual transmission; you might have heard it being referred to by other names such as Manumatic, Tiptronic, or Sportronic. As the name suggests, this transmission is automatic by default, but still gives the user an option to engage the gears manually, again without the use of a mechanical clutch. It also uses a torque converter for gear shifts, which you can engage using either a standard console-mounted shift lever or paddle shifters behind the steering wheel. 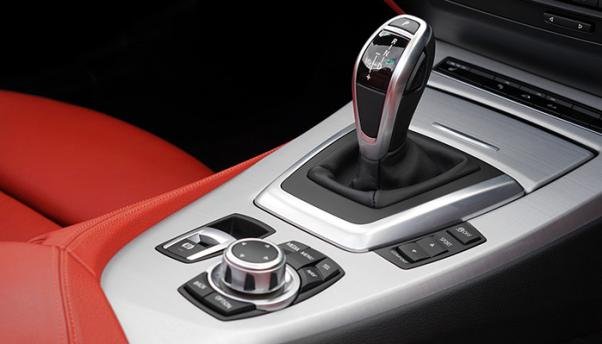 The semi-automatic transmission is automatic by default, but still gives the user an option to engage the gears manually

A third type is the continuously variable transmission, or CVT. Unlike other automated transmissions that use toothed wheels that interlock, CVTs use either a rubber belt or metal chain rolling along a pair of variable pulleys. This has the advantage of providing seamless and smooth shifts, since the belt or chain simply slides across the pulley’s wide and narrow ends to produce the necessary gear ratios. Another distinct difference is that CVTs are not limited by a fixed number of gear ratios, hence the name “continuous”. 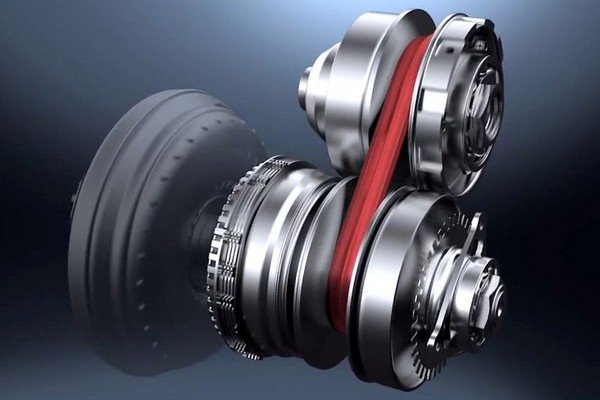 The fourth type, which is what you say comes with your new Tucson, is the dual-clutch transmission. Originally developed for motorsports, this uses two separate clutches for shifting, one for the odd-numbered gears and another for the even-numbered gears; think of it as having two manual gearboxes working as a single unit. The effect is that it produces faster shifts compared to standard single clutch transmissions, since you don’t have to wait for one clutch to engage the next gear up or down. This leads to significantly quicker response times, the better to maximize the engine’s power output. Dual-clutch transmissions combine the efficiency of a manual gearbox with the convenience of an automatic. Hyundai’s EcoShift dual clutch transmission in particular is electronically-controlled, and has three drive settings: Normal mode, which balances efficiency and performance; Eco mode, which enhances fuel economy with gradual acceleration; and Sport mode, which adjusts engine and transmission control for enhanced performance. The dual-clutch transmission uses two separate clutches for shifting, one for the odd-numbered gears and another for the even-numbered gears

2. Dealing with stop-and-go traffic in the Philippines

No matter what transmission a particular car has, it will eventually have to deal with an inevitable truth: getting caught in slow-moving traffic. Aside being a time-wasting annoyance to most drivers, bad traffic conditions also reduce a car’s efficiency and increase wear and tear on its parts, especially the engine and the transmission. 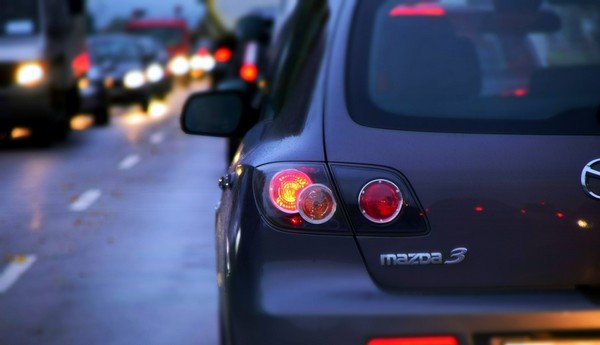 No matter what transmission a particular car has, it will eventually have to deal with an inevitable truth: getting caught in slow-moving traffic

When you keep your transmission in drive (D) while engaging the brakes at a traffic stop, it’s like you’re confusing the car; you want it to move yet you’re keeping it from moving. The automatic transmission fluid steadily rises as it struggles to lubricate the gearbox, while the brake pads eventually get hotter and prematurely worn. Your engine also ends up consuming more fuel since it’s straining against the stopping power of the brakes. By shifting to neutral (N) and just applying the foot brake at a traffic stop, no matter if it’s less than two minutes (the little things add up after all), you help preserve your transmission, engine and brakes.

>>> Related: What does D3 mean in automatic cars? 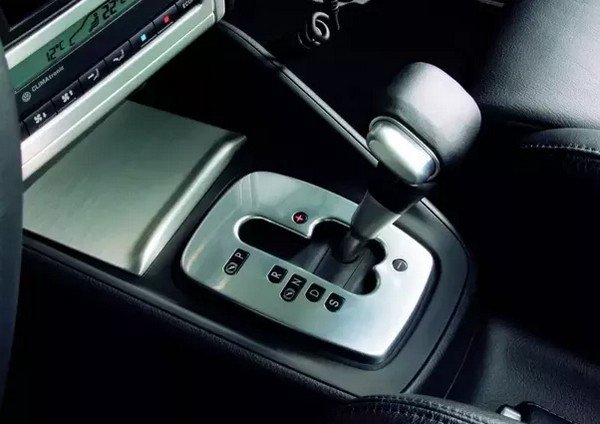 During extended stops for when you need to rest your right foot, you can also engage the parking brake to keep the car from unnecessarily rolling forward or backward. However, as much as possible, avoid using the park (P) mode frequently, especially if it isn’t accompanied by the parking brake or handbrake; this mode uses a parking pawl to stop the drive wheels from moving, but it can easily be damaged when transmission components are under continuous stress. Mind you, replacing a parking pawl can be costly since it requires that the whole transmission assembly be taken down.

Well, we hope we’ve helped alleviate your concern with this bit of car tips and advice. Modern cars come with sophisticated features to help you make the most out of your driving experience, but it doesn’t hurt to be conscientious behind the wheel; this will ensure that your new set of wheels will give you years of worry-free service.

traffic in the Philippines driving during traffic jam automatic vehicles