For those who still disregard of the car’s seatbelts.

Probably the most vital – and overlooked – aspects of driving safety is the seat belt, that wide nylon sash securing you to your seat in case the car makes a sudden stop.

It’s one of the first things you see inside upon opening the car door, yet many people seemingly ignore and turn their backs on it (literally) when they hop aboard and settle down inside.

But for those who do use seat belts and understand its true purpose, it often spells the difference between life and death. Check out Philkotse's list of 5 important seat belt safety tips to have a in-depth understanding about this essential feature.

Seat belts were invented in the mid-19th century by the British engineer George Cayley, primarily intended to keep glider pilots secured in flight. The first patent for a vehicular seat belt, however, was secured by American Edward J. Claghorn of New York in 1885. While successful in restraining both drivers and passengers, early seat belts were fixed in nature, causing a high number of head injuries and deaths. Owing to these incidents, a neurologist named Dr. C Hunter Shelden proposed retractable seat belts in 1955. Although the importance of seat belts as primary means of occupant safety had already been established, car manufacturers only offered them as optional features. The Swedish automaker Saab began offering seat belts as standard equipment on their cars in 1958. Further improvements made to the harness resulted in the now-familiar 3-point seatbelt which was introduced as standard in 1959 by another Swedish carmaker, Volvo, for its 122 model, a retrofit from the two-point seat belt it came with the year before. Interestingly, even though Volvo owned the patent on this new type of seat belt design, it chose to make it readily available to other automakers for free, in the interest of safety.

Victoria, Australia enacted the world’s first seat belt law in 1970, requiring the use of seat belts for both drivers and front-seat passengers.

Automotive seat belts come in different forms, depending on purpose of users.

The most common kind found on passenger vehicles is the 3-point seatbelt. This uses a Y-shaped configuration, a design combining shoulder and lap belts that were originally separately used in securing an occupant to the seat. They are commonly expandable and retractable, more or less adjusting to the occupant’s size. For people who cannot be accommodated by regular seat belts, there are seat belt expanders available.

Lap belts are 2-point straps that wrap around the occupant’s waist. They were the most commonly installed safety restraints in cars prior to the 3-point seat belt. Lap belts can still be found on the rear center seats of older cars, while newer models now have 3-point seat belts for all occupants. 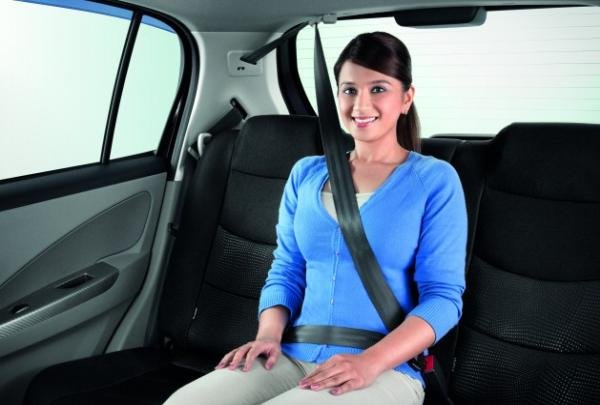 Another kind of seatbelt is the Belt-in-Seat (BIS) design, basically a 3-point seat belt with the shoulder part attached to the seat itself instead of the car’s B-pillar. This type is commonly found in convertibles and pillar-less hardtop cars.

For more specialized uses, there are also 4-, 5- and 6-point harnesses that fasten occupants even more securely. Two shoulder belts combine with a lap belt that is connected to another belt at the crotch area; they all come together at a central locking mechanism. The way such harnesses hold down the occupant tightly in the seat protects the upper body from injury, although the head is not as secure. 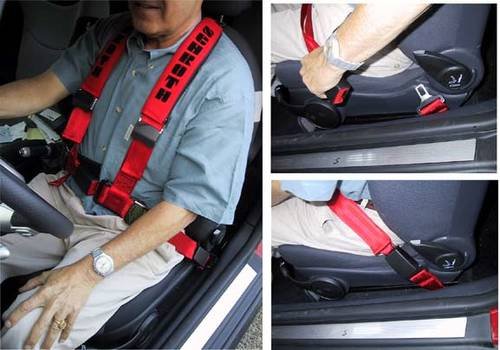 These harnesses are commonly found in child seats and race cars. A proposed bill currently pending in both houses of Congress mandates the use of child car seats for passengers aged 0-12 years old, citing findings from the World Health Organization that specialized child restraint systems can change the risk of injury by as much as 80%, compared to 32% with regular seat belts alone.

>>> Must read: Republic act 8750 on seat belt law in the Philippines: Know it, Follow it

3. How seat belts protect you

3.1. Seat belts work on the principle of inertia, or the natural resistance of an object against changes in direction and speed of travel

A car traveling at 80 kilometers per hour is experiencing inertia; this force wants the car to maintain its speed and direction, barring any external force that would change either of the two. Anything inside the car (which includes items and the occupants) has its own inertia; the car merely accelerates them to the speed it is traveling.

As long as the car is running at a steady pace, then everything is fine. But the reality of driving is that nothing stays fine for very long. When the same car abruptly changes speed and direction for whatever reason (sudden braking, collision, loss of traction, etc.) anything and anyone inside the car will now experience an independent inertial force from the one acting on the car.

The impact of the car slamming into a wall will stop the vehicle instantly, but the occupants inside will still be traveling at 80 kilometers per hour, with nothing but the dashboard and windshield to stop their forward motion. Seat belts make sure this doesn’t happen by applying the necessary stopping force that matches an occupant’s inertia with that of the car.

The seat belt typically consists of two parts: a shoulder belt extending across the chest, and a lap belt that rests on the pelvis, with the whole thing secured by a buckle mechanism on either the left or right side of the seat. A properly worn seat belt spreads most of this stopping force to the parts of the body that are relatively sturdy and over a wide area, to reduce the probability of damage. Additionally, seat belts are made of webbing material that is designed to stretch a little, so the occupant doesn’t stop too abruptly and get hurt in the process.

3.2. Retractable seat belts have become the norm in modern cars, combining safety with a measure of comfort

This means that under normal conditions when the belt is relatively taut, a person’s movement isn’t necessarily too restrained; you can still easily reach the dashboard to change radio stations or grab that cold beverage. In a sudden stop or collision, however, the seat belt’s retractor mechanism (pretensioner in newer cars) automatically increases the belt’s tension, firmly holding you on to your seat and making sure the vital parts of your body are safe, especially your head. To demonstrate this action, the next time you’re wearing a seat belt, try doing a sudden tug on your shoulder belt and feel how it tenses up. 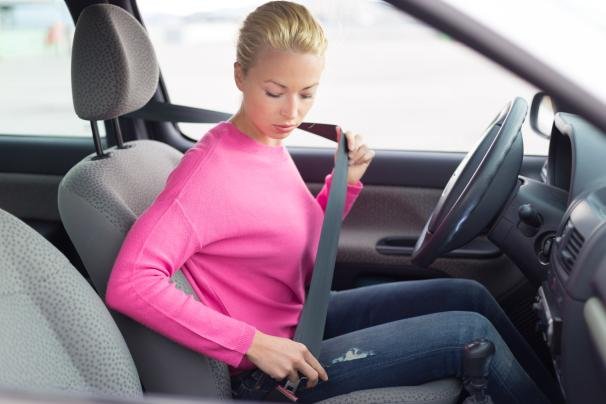 Retractable seat belts have become the norm in modern cars, combining safety with a measure of comfort

4. Seat belt use in the Philippines – or lack thereof

The WHO says that properly worn and fitted seat belts reduce the risk of vehicular fatalities by 40% to 50% for both drivers and front seat passengers.

By law, all passenger cars sold in the Philippines are equipped with seat belts as standard equipment for front and rear occupants. Legislation even exists in the form of Republic Act 8750, also known as the Seat Belts Use Act of 1999, which mandates seat belt use among drivers and front-seat passengers at the very least. Strict penalties are imposed on violators, with a progressively higher fine for succeeding offenses as well as a week’s suspension of the erring driver’s license.

Despite the presence of an enabling law, and research proving that seat belts reduce accident fatalities when used correctly, a lot of people still neglect to wear seat belts for a variety of reasons:

According to government data gathered in 2012, more than 132,000 violators of the Seat Belt Use Act have been caught and made to pay the corresponding fines.

The violations range from failure to wear seat belts, improperly worn/installed seat belts or even the complete lack of seat belts as required. Even mass media is guilty to a certain extent in encouraging this attitude; a lot of soap opera scenes show the characters exchanging dialogue inside a car – without wearing their seat belts.

So what’s the big deal with not wearing seat belts? Inconvenience at the very least, when you find yourself lurching from your seat when the car makes an abrupt stop at low speeds. It’s a different matter altogether in moderate to high-speed situations, where failure to wear a seat belt can cause serious injuries (whether by hitting the back of the front seats, the steering wheel, the dashboard or the windshield), leading to permanent disability, coma or even death.

One motorist, Einstein Rojas, tells of how his seat belt helped him survive relatively unharmed in 2013 when a truck hit the car he was driving at a traffic stop. Unfortunately, his companion was not wearing a seat belt, resulting to injuries that required multiple therapies to gain back the use of his legs.

5. Buckle up on every journey

There is a fundamental reason to seat belts: to help keep you alive during and at the end of every journey. The seeming inconvenience of being restrained safely to your seat is always trumped by the higher probability of survival in case anything untoward happens on the road. Whether it’s a short grocery run, a weekend drive to the mall with the family, or an extended road trip, unexpected dangers are waiting to happen: a child running after a ball suddenly darts across the street, the car in front of you suddenly slams on the brakes, or a wayward truck rear-ends you while you’re at a stoplight. Not everything can be prevented with driving skill alone. Always take advantage of the safety and security that a seat belt offers, for the best chance that you will arrive alive at your destination.

We hope that our article has provided you with helpful tips for safe driving.