In-car gaming: How to have an unforgettable gaming experience

Gone are the days where it's challenging to keep the kids and other passengers of a car to be entertained.  Today, lots of gadgets are readily available to kill the passengers’ boredom when stuck on traffic or during long trips.

Lots of portable and mobile gaming options are available in the market. In fact, it’s already possible to carry along a complete home console effortlessly in the form of a gen Wii U or the latest gen Nintendo Switch. Learn more by reading this article from Philkotse.com.

Bringing a handheld gaming system is the easiest way to play video games inside your car. And until today, it is still a viable option. Some of the best portable gaming choices are the Sonny Vita, Nintendo 3DSXL and 3DS. Y

ou can take these gadgets on a long road trip so your passengers, especially the kids, will have something to do and won't get bored. But the biggest problem here is the source of battery power. You can use a 12V adapter or a suitable power inverter to solve this. 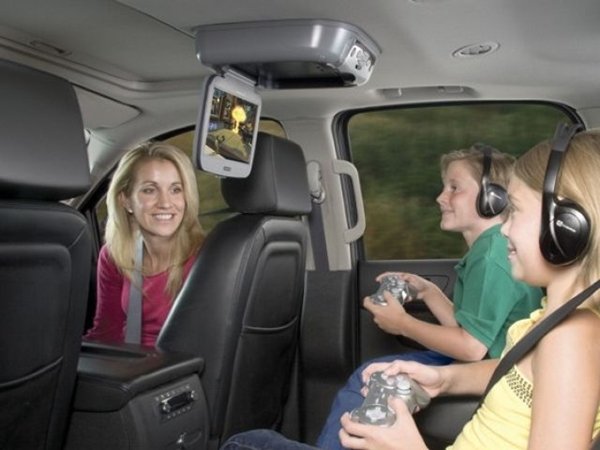 Additionally, gaming on tablets and smartphones continue to become increasingly popular every year. Some dedicated gamer might denigrate the said platform as not real gaming. But the important part is that a mobile phone or decent tablet can already provide entertainment on a long road trip.

>>> Check out: Best in-car entertainment ideas to fight boredom while in a long drive.

A long time ago, the thought of in-car gaming with the use of only a handheld device was just a dream for many. Though it's always been possible to put a 12V TV or plug it in an inverter, then plug the home console; however, the entire thought was not a very practical one.

Both the television and the home console will take up so much space because TVs used to be bulky. Additionally, the power consumed by the TV and home console can't solely rely on the cigarette lighter inverter.

At this current age, the situation is pretty different. Now, we have low-profile LED TV screens; however, there are still things you need to consider including the power requirement and the size of your home video game console. Today, some of the best options we have are the Nintendo’s previous-gen Wii U and Nintendo Switch. If you compare the Wii U with the PS4 and Xbox One, you can really say that Wii U console is significantly underpowered.

However, Wii U has lots of things to offer, making it one of the perfect in-car gaming systems. The switch is also more powerful compared to Wii U. Additionally, it has plenty of things going for it that makes it a great option for in-car gaming.

>>> Also check: Good preparation for a long journey in your car.

3. In-car gaming with Wii U

Wii U has a touchscreen LCD and a unique controller. Some games utilize the 2nd screen to show asynchronous information. In most cases, it can also be utilized for off-screen games. It only means that the driver can quickly hook up the Wii U in their vehicle and let the passengers play a few games without the need to worry about the TV.

With the Wii U, the problem with size and space constraints will be fixed. However, there is still an issue with the power source. The good thing is, Wii U does not use so much power, unlike most consoles. 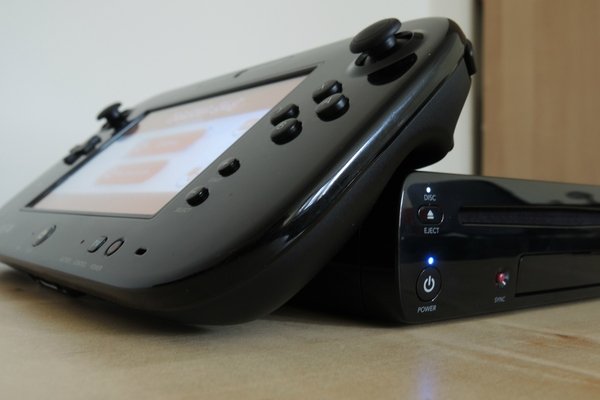 Wii U has a touchscreen LCD and a unique controller

Meaning, you can use the cigarette lighter jack or 12V accessory outlet as its power source.  Also, there’s no need to worry about purchasing a big inverter or have trouble wiring one.

As a matter of fact, peripheral manufacturers create power supplies specially designed for in-car gaming using Wii U – with one port for the USB cable and the other one for Wii U cable. It can be utilized to power other USB devices aside from Wii U gamepad.

>>> Read more: Top 4 best Bluetooth kits for your car and its cost.

Nintendo Switch has all the things you need to utilize it in in-car gaming because it is made for portable use. It can even be connected in the car's video monitor (if your vehicle has one) via HDMI. Some video games can be played in multiplayer mode with the use of joy-con controllers that come with the system. You can use Nintendo Switch in a better way by using an inverter to provide a power source for the system. You can also utilize a 12V adapter accessory. You also have the option to connect real controllers for better multiplayer gaming (primarily if the multiplayer games do not support joy-con controllers).

Just keep in mind that keeping the Nintendo Switch clean is essential to have tremendous in-car gaming experience.

>>> You might concern: 8 essential tips when buying car accessories online.

5. Downsides of Nintendo Switch or Wii U for in-car gaming

The major disadvantage of using Nintendo Switch or Wii U in in-car gaming is that it can solely be used with gaming. All you can do with it is play games while with the PS4 and Xbox One; you can still plat Blu-Rays and DVDs.

When you use the Wii U gamepad, watching movies on the road will be disabled.  It's a similar scenario with Nintendo Switch because it does not utilize optical media.

You can always use a mobile hotspot or pocket Wi-Fi to watch internet video services such as Hulu, Netflix, etc. But for disc-based medial such as Blu-Ray and DVD, it’s just not on the table for either the Nintendo Switch or Wii U.

>>> Grab your attention: [Philkotse guide] Simple ways to get Wifi in your car. Another problem with Wii U as an in-car gaming system is that it only supports single-player mode. It’s different from Nintendo Switch. It does not allow multiplayer mode without a monitor or television.

The situation changes if your vehicle has a roof or headrest-mounted screens. If not, then you need to consider installing a power inverter and utilizing your preferred home console system.