Have you ever been dared to do something inconceivable, incredible, maybe even inane whether for a good cause or just laughs and giggles? Tasks or challenges like these have become a dime a dozen in recent years, and technology has helped to make these tests gain enough traction for people everywhere to join in. There’s no actual prize involved, only the potential to claim one’s proverbial fifteen minutes of fame online until someone else tops it. The logic behind stunts like this defies common sense

One of these is the so-called “hollow block challenge,” which at face value simply involves carrying the biggest number of concrete hollow blocks in a given time. There’s no limit to the number of blocks or the means to pull this off, as long as the bigger the quantity and the more improbable the method, the better to outdo the competition.

More than simply boasting about how many blocks one can carry, the challenge has also become an occasion to show off a car’s capabilities, even if the vehicle wasn’t necessarily intended to be used in that way. To illustrate, imagine an MPV, SUV, or even a subcompact car being used to carry hollow blocks, with the material loaded inside the cabin, stacked inside the cargo area, and every available footwell with the seats folded down. Variations of this challenge involve similarly weighty cargo such as concrete floor tiles, sacks of cement, and concrete rebars.

It might be humorous, if bizarre, take on bragging about what one’s car can do, but there are reasons why many people are not inclined to get on board with that trend.

You risk ruining the interior

Being made from concrete and gravel, concrete hollow blocks are used for building construction. If you’ve ever handled this kind of material before, they have a very coarse texture. Reinforced surfaces such as cargo bed liners on pickup trucks can withstand the potential wear and tear from handling hollow blocks. Transporting blocks this way leaves your interior vulnerable to damage

But the interior finish found in vehicle cabins? Not so much. The carpet, floor mats, door trims – all those will be easily damaged just by setting down the blocks. Ditto with the fabric or leather seatbacks when you fold down the seats to make room. And once you get moving, the blocks will be jostling around, spreading the aesthetic damage even further.

It’s not good for the car’s suspension

Granted, modern cars are engineered to withstand normal loads of passengers and cargo, but the keyword is normal. Suspension systems are tuned according to a specific vehicle’s intended purpose, ideally striking a balance between cargo-carrying capacity and passenger comfort. Carrying hollow blocks on a vehicle that isn’t really equipped to do so tips the scales towards the latter, which will likely damage the suspension before long. More importantly, a vehicle’s payload capacity is the maximum amount of weight that can safely be added as cargo, in addition to its own bulk. If your car goes beyond the weight that it can safely handle, the handling and ride quality are compromised. The engine works harder than it needs to, and the brakes wouldn’t be as effective.

You put your health at risk

Some lower-density hollow blocks are made of industrial wastes, such as fly ash or bottom ash. And since these blocks easily crumble, they can release dust particles in the air which you’re at risk of breathing in while transporting them.

Even with the air conditioning off and the windows open, the particles will linger inside the cabin long enough to accidentally enter your airways at the first opportunity. 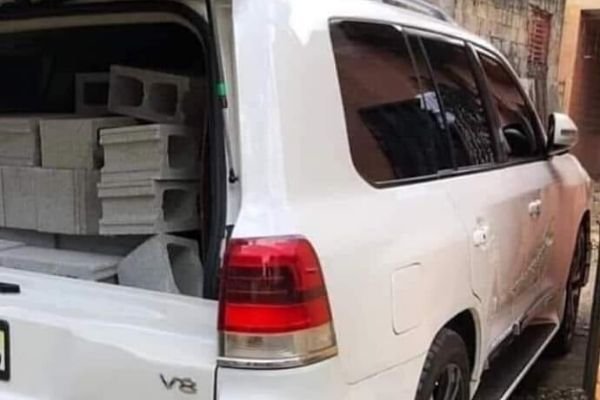 Imagine breathing all those particles while transporting your cargo

And it’s not just what you breathe in either, as the particles can be large enough to get in your eye and impair your vision while you drive. There’s also a risk that you may have an allergic reaction to any of the components used in making hollow blocks.

>>> Related: 3 driving habits that can cause cancer and other health problems

The warranty can be potentially voided

Car manufacturers are not always very explicit when enumerating the various instances that can cause you to kiss your warranty goodbye. A good rule of thumb, however, is if you use the vehicle for purposes other than those it was designed and engineered for, such as racing and carrying excessive loads.

Stacking hollow blocks inside the cabin certainly falls within the latter, and you better be prepared with pretty deep pockets once the car no longer performs the way it used to.

We’d rather you stack up on relevant automotive knowledge instead with Philkotse.com.