6 tips to identify a fake traffic enforcer in the Philippines

Warning alert after two men arrested in the Philippines for allegedly extorting money from drivers.

It was on a sunny Tuesday, 27th of March 2018 that the Metropolitan Manila Development Authority warned the public about men who pose as one of the agency’s own. The agency discovered that one unlucky motorist has been given a fake violation ticket by a poser.

Tragically, it was only until the motorist, a resident of Mandaluyong, went to the nearest MMDA office to claim his driver’s license that the misdeed was discovered. Acting MMDA general manager, Jojo Garcia said, “The agency did not have the motorist’s driver’s license.”

Garcia also advised the public to be vigilant and should always remember to do one thing to avoid similar incidents from happening: ask the traffic enforcer’s mission order. This mission order states the specific tasks a traffic enforcer should partake, his assignment or location and the time of his duty. 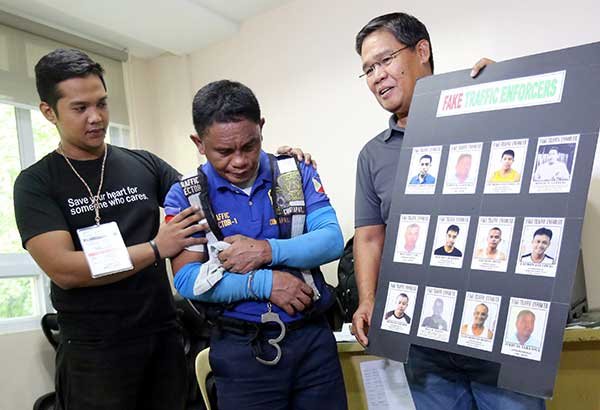 “If one traffic enforcer does not bear his mission order, he is deemed unauthorized.”

It is easy to be deceived by these costumed impostors especially when you are unaware of traffic rules and regulations. These extortionists will not only take advantage of your cluelessness but obtain money from you as well.

What can you do to pinpoint those extortionists from the authorized traffic enforcers in the Philippines? Philkotse.com has prepared a run-down of ways you can determine which are just playing dress-up and which are committed to the job.

An officer-on-duty will always comply with the standard operations and procedure of an agency to wear their uniform. Most of the time this uniform consists of a polo (ones you can commonly see on TV), dark-colored slacks or pants, rider boots or dark-colored closed shoes and a helmet or cap with the designated LGU or MMDA logo patched on it.

Aside from the plain or minimally-printed light blue polo shirts, some men who are part of the MMDA’s special task force that wears gray-colored shirts. For the anti-jaywalking unit, they are usually seen wrapped up on a red shirt.

Although they are tasked for a specific purpose, they have the authority to apprehend other violations, this according to Crisanto Saruca Jr., the officer in charge of MMDA Traffic Discipline office.

An officer-on-duty will always comply with the standard uniform

In addition, LGU assigned men may wear polo shirts that vary in color. The most crucial part of their uniform is the presence of an official LGU or MMDA logo. The officer’s name plus the initials or the address of the office he is associated with must be seen to the public as well.

On rainy days where traffic enforcers and constables wear protective gear such as raincoats and jackets, they have a nameplate or an identification card that can be read by motorists despite the weather condition. In addition, LGU assigned men may wear polo shirts that vary in color

2. Request a copy of his official documents

All officers-on-duty will always have their identification card at all times. What does a legitimate ID contain? At first glance, you’ll see the officer’s full name, photograph, and an authorized signature of the head of the LGU he is under or the MMDA chairman.

It is a motorist’s right to ask questions regarding the nature of the apprehension. Also, a driver may ask for the mission deputation order that states the officer’s official time of duty, area of authorized jurisdiction, and specific tasks to partake. Also, this document shall determine whether a constable or an enforcer has the right to issue traffic tickets. Note that every constable or traffic enforcer on duty will have the following tools in hand: a whistle, a ball pen, and a notepad, and a motorbike with MMDA or an LGU’s logo plastered on it. There are some cases where constables and enforcers roam around without their motorcycle with them.

As guided by the Republic Act. No. 7924, national roads and significant thoroughfares shall be placed under the jurisdiction of MMDA while secondary roads shall be the responsibility of the LGU. Remember the mission deputation order initially mentioned in this article?

The driver can attest to whether a specific officer or constable has the right or authorized to perform his duties in that particular area.

>>> Read more: 7 essential services of MMDA in the Philippines

As explained by Saruca, MMDA enforcers and constables follow a protocol when apprehending a motorist for a violation. This goes through their dialogue, manner of speaking and their overall attitude to the driver in question.

There are cases however when a traffic enforcer or constable is forced to exercise his duty with strength and authority which other people may view as arrogance or an abuse of power.

But, Saruca would explain these instances as cases where a traffic constable or an enforcer cannot see eye to eye with an apprehended driver. This is where various videos on different social media platforms would display stubbornness on the part of the motorist despite being courteous and gentle.

Saruca also mentioned that traffic enforcers and constables are human beings prone to humiliation, harsh words and even an aggressive display of the behavior. As much as they’d like to maintain order and peace on the road, this could not be achieved without cooperation from both sides.

Let's face it. In this world of multimedia ease, you can record every event and every moment with the use of your smartphone and use it as evidence in cases of questionable apprehensions from extortionists. MMDA traffic enforcers and constables wouldn’t shy away from a camera especially when they know they’re on the right side.

They are also equipped with body cams that can be used to chase someone and punish them according to the law. An extortionist, on the other hand, would do away or even command you to stop recording their questionable act. Whenever in doubt, be swift and record every moment before calling the authorities.

It is important to note that other people would capitalize on others’ weaknesses and vulnerability especially when these extortionists portray themselves as a person of authority. If you have seen or witnessed an apprehension that seems suspicious, always report that incident to your LGU's or MMDA's office.

With these reports, awareness on the part of these offices and agencies are heightened, and they can do something that'll mitigate these extortionists on the road.

>>> In case you are a Filippino driver, don't forget to check out our helpful tips and advice for safe driving.