At the Manila International Auto Show - MIAS 2018, Suzuki Philippines has premiered the all-new Suzuki Swift Dzire 2018. The car appeared at the show with a bolder body and a glossier cabin. It looks like a Swift Hatchback but with a roomier and more practical design. Unlike its predecessor, the next-gen Swift Dzire receives a more special appearance but still retains main features.

For starter, the front fascia comes adorned with a black grill highlighted by a thick chrome trim. The front bumper is also completely new with extra chrome accents and larger fog lamps. The most outstanding feature in the new Swift Dzire is its shinier revised headlamps. Similar to its hatchback brother, the Swift Dzire is also designed with sharp angles and soft curves, earning the new sedan a more impressive look than the rest. The Swift Dzire is also designed with sharp angles and soft curves, earning the new sedan a more impressive look than the rest

The Suzuki Swift Dzire 2018 gets a more conventional look with a less sloped roofline than the hatchback’s. Additionally, the car is decorated with a distinct short trunk, upswept taillights and longer rear quarter panels. Speaking of its size, the 4-door sedan measures of 3995mm in length, 1735mm in width and 1515mm in height, with a wheelbase of 2450mm. 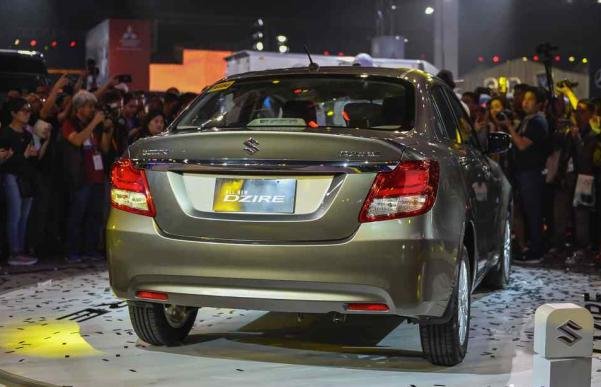 The car is decorated with the distinct short trunk, upswept taillights and longer rear quarter panels

Stepping inside, if the Swift has circular shapes in its interior, the Dzire now boasts more rectangular cues. Like the five-door, the Swift Dzire is equipped with a fresh climate control system, the instrument panel with redesigned hooded gauges and a flat-bottomed multi-function steering wheel.

Base variant is offered only a 2-DIN sound system with USB, CD and AM/FM radio. The higher-level version has a standard touchscreen infotainment system including some features like a 6-speaker sound system, Aux, USB, CD, AM/FM radio, Bluetooth and navigation.

When it comes to the engine, the all-new Suzuki Swift Dzire 2018 is powered by a 1.2L K12M 4-cylinder powertrain like its predecessor. It is capable of cranking out 81 hp and 113 Nm of torque, works in a conjunction with a 5-speed automatic-manual transmission (AMT), also dubbed Auto Gear Shift or a 5-speed manual transmission. To compare, the Suzuki Swift Dzire 2016 for sale features a 1.2L DOHC 16-valve Inline-4 VVT, 4-speed automatic transmission, and 114 Nm of torque.

According to the latest car news, still, Suzuki PH hasn’t disclosed the next-gen Suzuki Swift Dzire 2018 price but the Japanese car manufacturer stated that the new car’s price tag will not be more than P700,000. The all-new Swift Dzire 2018 is powered by a 1.2L K12M 4-cylinder powertrain like its predecessor

UPDATE: Philkotse.com has already published an in-depth review for the all-new Dzire 2018. Click to learn what the compact sedan has to offer at P638k!