The Hyundai Ioniq 2018 hybrid is the first hybrid of Hyundai on the Philippine market.

Thanks to the new tax reform law, hybrid and electric vehicles are now reduced a half of excise tax. And the first carmaker raising its hand to take this great advantage is Hyundai. The Korean brand has brought the Manila International Auto Show - MIAS 2018 a hybrid model - the Hyundai Ioniq 2018 hybrid. The Ioniq made its debut at the Geneva Motor Show back in 2016. It measures of 4470mm in length, 1820mm in width and 1460mm in height. In spite of being designed as a five-door liftback, the Ioniq comes available with 3 different engines including a plug-in hybrid electric vehicle, a pure electric vehicle and a conventional gas-electric hybrid which was introduced at MIAS 2018.

Walking around, the Ioniq gets a sporty and stylish look derived from Hyundai’s Fluidic Sculpture which is very effective in aerodynamics. The drag coefficient of the car is 0.24 Cd. The exterior comes equipped with 17’’ alloy wheels, LED daytime running lights and projector headlights. 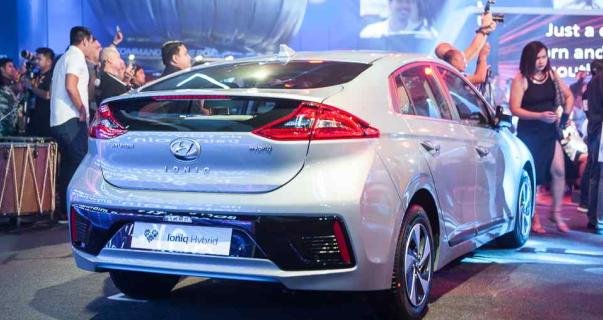 Stepping inside, the Ioniq’s interior is armed with a lengthy list of high technologies consisting of parking sensors, cruise control, an automatic climate control system, Bluetooth, a power adjustable seat for the driver, a push-button start system, a smart key, etc. The Ioniq 2018 hybrid's cargo is relatively spacious for loading luggage

The most special thing in the Hyundai Ioniq 2018 hybrid is, undoubtedly, its hybrid engine which is a perfect combination of a 1.6L gasoline engine (104 hp and 147 Nm of torque) and an efficient electric mill (43 hp and 170 Nm of torque). The latter is mated to a 1.56 KW/h lithium-ion polymer battery and a six-speed dual clutch is chosen to be the Ioniq’s transmission. In the Philippines, the Hyundai Ioniq 2018 hybrid is the first hybrid vehicle of Hyundai. It is worth noting that the car is priced at P1.498 million which is more than P300,000 cheaper than the Toyota Prius C’s price tag. For this reason, the Ioniq 2018 is proud to be the most affordable hybrid in the market at the present.

The Ioniq hybrid will come available for sale sometime in November 2018.