Crossovers have replaced the sedan as the supreme, most popular class of cars globally. That is a given for a couple of years now. Guess what though, some people, especially us Asians, still find the typical crossover to be unwieldy, chunky vehicles much like their SUV predecessors.

Sure, they’re spacious, but they can be annoying to drive in places like Mumbai, Jakarta, Bangkok, and here in the Philippines where we have the terror traffic trifecta of Metro Manila, Cebu, and with Davao city as the latest addition.

To address the need for the typical, traffic tortured Asian driver, Kia has come up with a brilliant little crossover. It’s called the Kia Sonet, and its total length only measures at 3,995 mm, making it similar in size with the Hyundai Venue while slightly shorter as compared to the Nissan Juke and the Ford EcoSport. Despite being tiny, the Sonet is packed full of features, and its choice of engines is rather exciting. The highlight, however, is that this might be the smallest ever crossover to have a diesel engine available. It’s a 1.5-liter diesel engine, and it either uses a traditional six-speed manual or the high-tech Smartstream six-speed iMT.

So what is the Smartstream six-speed iMT?

Remember our article on Kia-Hyundai’s clutchless manual? Well, the Kia Sonet is one of the applications of the aforementioned technology. So yes, it has no clutch pedal, but it does have a gear lever and an actual clutch that’s actuated by an electric device whenever the driver wants to change gear. It's similar in size to the Hyundai Venue

As Kia claims, the iMT system is very intuitive, and it was designed to deal with a multitude of driving conditions like stop and go traffic, ascending hills, starting from an incline, and low speed driving. Because you know…traffic.

Now back to the Sonet.

Apart from the new Smartstream iMT. The Sonet is also equipped with the UVO Connect, which is a suite of technologies which include: voice assist for phone calls, weather information, navigation control, climate control, a start/stop feature, Android and iOS connectivity, a smart, anti-glare rear-view mirror, and many others.

The cabin’s pretty plush too with its 10-inch HD touchscreen, soft-touch surfaces, a D-shaped steering wheel, ventilated driver and front passenger seats, and there’s even red stitching on many parts of the top-of-the-line GT variant.

>>> Related: Meet the Kia Sonet, the Korean company's answer to the Ford Ecosport 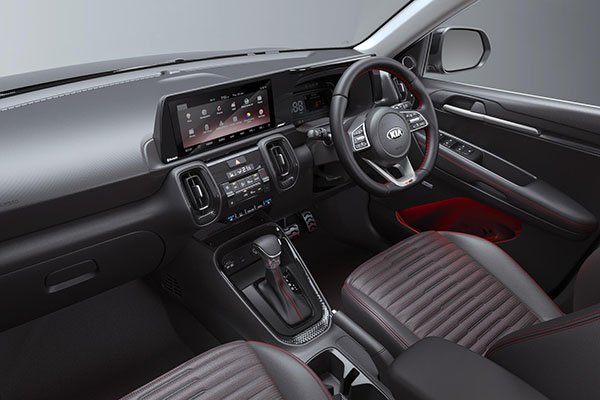 Here's the interior of the Sonet's GT variant

While packed with features any driver would want, the Kia Sonet as of now is only available in India where it’s currently being made. Like India though, the Philippines will appreciate the Sonet a lot since crossovers are also popular here, and traffic is also particularly bad here.

As of now though, there’s no word yet whether Kia PH will be bringing in this neat, cute, high-tech little crossover. So for future updates with regards to the Kia Sonet, keep reading here on Philkotse.com.