2018 Honda Accord to make world premiere on July 14 The tenth-generation Accord mid-size sedan will be launch on July 14 in Detroit
To whet our appetites, the Japanese car manufacturer has also released a concept teaser photo, showing an "aggressive stance and proportions" of this sedan. In the sketch, the new Accord possesses a front end decorated by Honda's chrome-unibrow corporate face which can be seen on the current Civic. It also shares Honda's "Jewel Eye" LED headlights with the Acura and high-trim Hondas. Moreover, the sedan looks to wear typical five-spoke, paper windmill-style wheels.
>>> Related: Complete guide to the current PH-market Honda Accord 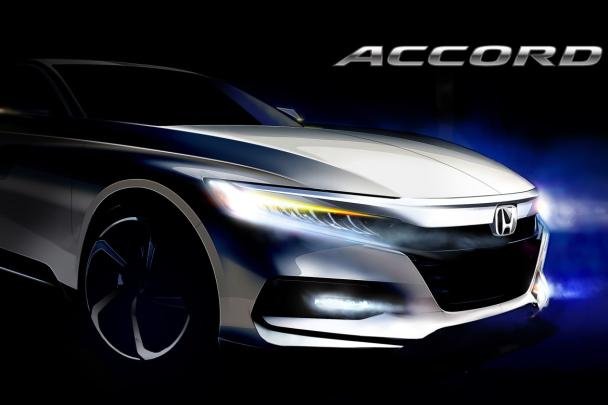 Alongside best-looking appearance, Honda touts that the new Accord will be the most fun-to-drive and most fuel-efficient Accord. Accordingly, the car will be offered a pair of turbocharged 4-cylinder mills, replacing the outgoing V6, and Honda’s next-generation hybrid system. The new Accord will be the most fun-to-drive and most fuel-efficient Accord
>>> Related: HONDA ACCORD 2012 FOR SALE
Honda will probably take advantages of the 2.0L turbo engine (the same engine in the Civic Type R) producing 300 hp and paired with a ten-speed automatic transmission. The second turbo engine is likely a 1.5L unit which is married to a 6-speed automatic transmission. A CVT will likewise be available.

Is the next-gen Accord really the greatest Accord ever made as promised? We will soon get to judge how true that is in a few weeks. Latest updates on upcoming Honda cars can be found in our Complete guide to the Honda Philippines' local lineup.
Honda Accord Prototype 2018

Know more about Honda Accord 2022

The Honda Accord 2022 is the Japanese marque's entry to the midsize sedan segment, which is now on its 10th-generation version. It is offered in the Philippines under one variant only named the EL Turbo CVT Honda Sensing, Accord 2022 Philippines priced at Php 2,350,000. Powering this executive sedan is a 1.5-liter Earth Dreams Technology DOHC 16-valve VTEC turbo engine that delivers 187 horsepower and 260 Nm of torque. This power unit is connected to an Earth Dreams Technology Continuously Variable Transmission (CVT) as standard.