Why Doble Plaka is so against by bikers?

Jun 27, 2019 | Same topic: Highlights of the week
The Motorcycle Crime Prevention Act is one of the most controversial laws that have been implemented in the Philippines. Let's find out more about this rare and serious social situation.

In an attempt to control and minimize the increasing number of crimes perpetrated by individuals riding in motorcycles, Philippines President Rodrigo Duterte signed into law the Motorcycle Crime Prevention Act last March 8, 2019. This law is more popularly called as the ‘Doble Plaka’ law.

Philkotse.com will explain why's this law is so controversial to the public, especially bikers in the Philippines.

Basically, the law implements a new and supposedly improved number plate system specific to motorcycles regardless of size.

The Motorcycle Crime Prevention Act, or Republic Act 11235, requires the new color-coded motorcycle number plates to be larger so it would be more visible from a distance of at least 25 meters. There would also be two plates for each motorcycle: one on the front and other at the back. Anybody caught violating or not following this law can result in a fine of up to PHP 100,000 and even imprisonment.

This new law is heavily based on the Senate Bill 1397 co-authored by Senators Richard Gordon and Tito Sotto and under Section 5, the Land Transportation Office or LTO is assigned to issue the number plates to the public.

'Doble plaque' is against by more than 50,000 motorcycle riders

The plan is also for the LTO to come up with a color scheme specific to the region where the motorcycle is registered in. The LTO will also decide on the style and size of the font.

>>> Read more: 6 Main Impacts of Having a Number Coding System in Philippine Traffic

Also included in the particulars of this new law specific to Section 9 is when a motorcycle has been used as an accessory to a crime: “the owner, back rider, driver, or a passenger who participated in the same" shall be chargeable up to 40 years imprisonment or Reclusion Perpetua.

Less than a month after it has been released, the public sentiment seems to be not in favor of this new law. Motorcycle groups, dealers, and manufacturers have been very vocal against their disagreement.

Enraged, a protest was done dubbed as the “Unity Ride” with almost 10,000 riders. The motorcade followed started from EDSA’s People Power Monument going to the Senate building located in Pasay. A protest was done dubbed as the “Unity Ride” with almost 10,000 riders

The administration’s goal here is to keep motorcycle-related incidents at bay by concentrating on the identification of the motorcycle, but there is more than meets the eye with protesters disagreeing that it is not fair and logical based from these arguments:

According to the motorcycle riders and owners, the law is deliberate and apparent discrimination against them. They feel like they have been profiled unfairly and that all motorcycle riders have automatically been labeled as criminals.

Yes, the rise of motorcycles being used in crimes have steadily increased but should not be a conclusion that all riders have a bad impact on society and that they mean to harm their fellow citizens. According to the motorcycle riders and owners, the law is deliberate and apparent discrimination against them.

Having a strapped metal blade in front of the motorcycle can lead to a disaster. The plates will automatically transform into deadly razors while riding high down the road at 20 to 80 km/h.

This puts the riders at risk and even to the pedestrians should the plates come loose. Riders have also mentioned that the bigger license plates can affect the aerodynamics of the motorcycle.

Without the proper motorcycle plate, the law enforces a fine of not less than PHP 50,000 but won’t go higher than PHP 100,000; and prison correctional for six months and one day to 6 years. Protesters argue that the law has too many grey areas to commit a genuine, honest mistake.

The application for the license plate is such a lengthy and exhausting process itself where drivers are required to wait for so long even before the actual procedure.

There are no temporary stickers for motorcycles, so if one accidentally and honestly forgets bringing along the registration document for a license plate; then one is left with excessive fines to face. 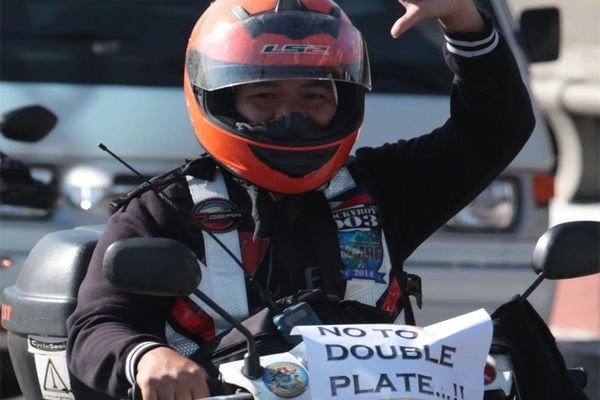 Protesters argue that the law has too many grey areas to commit a genuine, honest mistake

The Cost to Manufacturers

There is no motorcycle in the Philippines designed to have the proper plate holders required for the ‘Doble Plaka’ law.

The Philippines will become the first country to have required motor plates on the front and the provisions and design to achieve this is not available yet. With this, the industry of motorcycles would have to cease sale.

Not for the Poor

3. The law is still implemented after all?

These are the traditional livelihoods of those within and below the poverty belt, and the new law endangers this capacity to earn a decent source of income.

Despite the arguments and concerns raised by the public, the government is determined in their decision to proceed with its implementation because of the belief that it will positively impact the country’s peace and security.

In a surprising change of events though, President Duterte decided to suspend the law. This resulted in some positive response where they agreed that all sectors must be fully heard prior to the full implementation.

This is good news to the community as well as to Senator JV Ejercito who has interceded with the current objections.

The head of the country mentioned that further discussion with Senator Gordon and the Land Transportation Office is needed. He said that he would try to convince the LTO to hold on to it and have the law suspended for the meantime because of the danger it poses.

The president suggested making the plates at the back bigger instead so it would be easier to see as what’s essential is the plate at the back. Furthermore, the President advised that the reason why he signed the law in the first place is that the police and the military recommended it and that they were able to provide a rationale about the bill turned law.

Although a lot is divided about this law with some voicing out that this is not the solution for criminality, it can be noted that the President suspending the law means that he is still listening and is considering the public’s interest. President Duterte also admitted that the fines are rather high and steep.

Hopefully, the government can come up with a suitable agreement as everyone’s objective is to stop motorcycles from being crime machines and restore some peace and order to the country.