Being the sensible and practical vehicles that these two are, no offense, they’re not that exciting to drive. They’ll get you from A to B and they’ll never let you down even when using them to ply EDSA the daily.

A few hours ago, at the 2020 Tokyo Motor Show, however, Toyota, specifically has unveiled a completely different Yaris. It uses the Toyota New Global Architecture, GA-B platform, it was made after that famous pronouncement by Toyota and it makes a whopping 276 horsepower and 360 NM of torque. Ladies and gents, the GR Yaris

>>> Find your next Toyota Yaris at the best price right here!

If you’re wondering what kind of engine it is using, get this…it’s a turbocharged 1.6-liter inline-3 called the G16E-GTS and it’s built by none other than Gazoo Racing. So yeah, it’s currently the most powerful three-cylinder engine in the world right now.

Apart from that beastly engine that we still know close to nothing about, what we do know that it has an all-wheel-drive system, a limited-slip differential, a six-speed manual transmission and 18-inch wheels. So yeah, everything about it just screams PERFORMANCE. Aside from PERFORMANCE, the GR Yaris looks really smashing

With these features, the Toyota GR Yaris can reach an electronically limited top speed of 230 km/h and can accelerate from a standstill to 100 km/h in just under 5 seconds.

Toyota GR Yaris: Not just about the speed

This high-performance Yaris was built in coordination with Tommi Mäkinen Racing which is, of course, bears the name of its owner, the current team principal of the Toyota Gazoo Racing team and himself a four-time World Rally Champion.

As such, the GR Yaris owes much of its abilities from rally racing know-how. So yes indeed, there’s no doubt that this monster of a hatch can rip through any race track or in rough roads in some backwoods area. 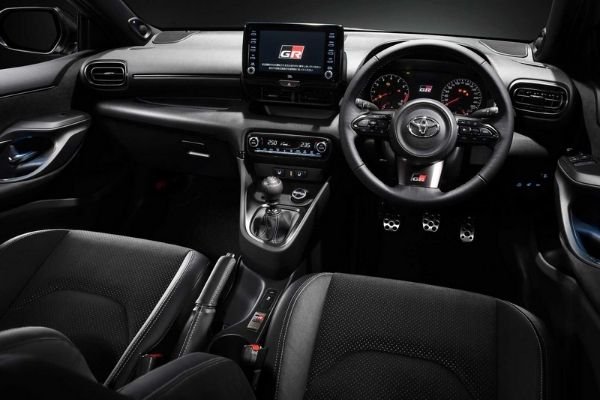 Here's the cockpit of the GR Yaris. It's deliciously black all around

With the GR Supra available in the Philippine market right now, we’re really hoping that the GR Yaris will be released here in the country.