Updated Dec 15, 2020
A comparison between the Toyota Vios vs Toyota Yaris. Mechanically the same cars but a bit different. And no, it's more than just the Yaris being a hatch.

As most of you already know, the Toyota Yaris subcompact hatchback, at least here in the Philippines, is based on the Vios subcompact sedan; after all, they’re virtually riding on the same chassis, powered by the same engine and transmission choices. There are, however, some significant differences.

While usually, we pit two models against each other in terms of specs to see which is better, this Toyota Yaris vs Toyota Vios comparison might be a little different in that these two models are virtually the same car. Despite that, they’re actually priced and marketed differently; as such, they seldom eat into each other’s chunk of the sales pie.

This is more of a guide on which model might be better for you: the Toyota Yaris 1.5 S, or the Toyota Vios 1.5 G Prime. The King in the market: Vios Or its twin hatchback: Yaris?

Before getting deeper into our full-scale comparison, let's check out the in-depth review for each model: The Toyota Vios is sleeker than the model it replaces The Asian Yaris shares the same front fascia with the Vios

Being a hatchback, the Toyota Yaris has a shorter wheelbase than the Toyota Vios. While that may be the case, the rear storage area of the Yaris can actually fit a decent amount of cargo, especially with the rear seats folded down. The Vios’ trunk though is cavernous, able to take on up to 478 liters of cargo. The Vios has a trunk and an edgy-looking rear end If compared with the Prime, the Toyota Yaris is essentially the same vehicle even on the inside. Even the design of the dashboard, the steering wheel, and the seats are the same. Note though that both of these vehicles, despite one being a hatch, provide really good leg-room and headroom.

Another key difference is that the Yaris actually has suede-like seats and synthetic leather on some parts of the doors. The Vios on the other-hand has cloth though it still has faux leather covering the steering wheel and the dash.

>>> Related: 2021 Toyota Yaris: Expectations and what we know so far 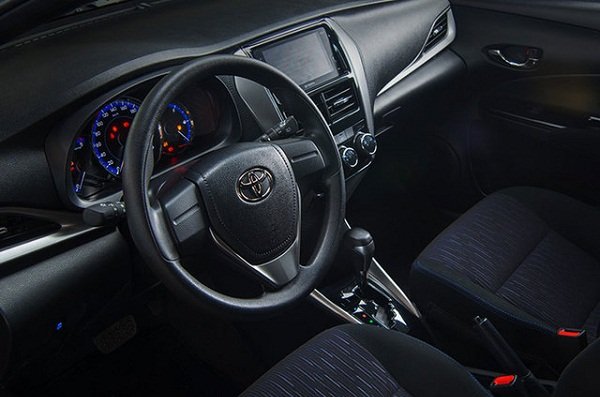 Guess which one's which? While you might think that they'd handle differently, they're actually pretty similar

For more affordable models from Toyota, please check out our Toyota for sale section.

As the top of the line variant of one of the most best-selling sedans here in the Philippines, the Toyota Vios 2019 is no slouch when it comes to safety equipment. The same goes for the Yaris. What Toyota can do to improve these two popular models though is the addition of more driver-assist technology for future models.

Things like a lane departure warning system, automatic emergency braking, etc. Though that might actually cut out the Vios’ target market, those technologies might actually make the Toyota Yaris 2019 more competitive in its market segment.

And speaking of market segment, the Yaris is currently a direct competitor to the Honda Jazz.

>>> Get the latest pricing changes of the Toyota Yaris Philippines here

The Vios has a wider range of variants in its lineup, making it more attractive to a broader range of budgets. In comparison, the Toyota Yaris’ cheapest variant costs Php 890,000 which makes it more premium. While the Vios Prime 1.5 G is as well-equipped as the Yaris 1.5 S, the base model Vios is a bare shell when compared to its equivalent in the Yaris E M/T.

There is also a significant gap between their respective prices, putting the base Vios 1.3 on a whole different ball game.

In its own market segment, it is pretty obvious that the Toyota Vios is King in the Philippines. Its range of variants alone is also very indicative of its versatility; it can be a premium sedan while it can also fill in the role of a cheap reliable vehicle for those who want to go from A to B or for someone who wants to provide that service.

In comparison, the Toyota Yaris is without a doubt a premium hatchback and is more suited to the young professionals living in the city. As such, a Toyota Yaris vs Honda Civic would be a more appropriate comparison. They are after all direct competitors and they are both within the same price range. Toyota Yaris vs Vios: Your vote?