Toyota Rush 2018 is now available for reservations in the Philippines

The upcoming Toyota Rush 2018 is expected to go on sale in April or early May.

This is surely good news for many car enthusiasts in the Philippines! We now don’t have to wait for the all-new Toyota Rush 2018 anymore. The Japanese car manufacturer has kindly brought its beloved customers a great surprise by announcing that the 7-seater mini SUV is now already available for reservations.

In detail, Toyota Motors Philippines (TMP) informs that buyers can now reserve the Rush at any of 63 authorized dealers across the country. Still, the official launch’s date of the Rush 2018 has yet to be confirmed but it is predicted that the car will make its debut sometime around April or early May 2018. The upcoming Rush is expected to go head-to-head with strong rivals like the Honda BR-V and the Mitsubishi Xpander 2018. The car measures 4435mm in length, 1695mm in width and 1705mm in height. The Rush is an Avanza-based vehicle using a full-ladder frame chassis, making the car different from other contemporaries in its class.

The Toyota Rush 2018 boasts an aggressive and sleek style, evoking the image of its larger brother - the Toyota Fortuner. The front fascia features an enormous 4-slat grille and upswept headlamps while the rear receives a tailgate-mounted spoiler, a diffuser and wraparound taillights. 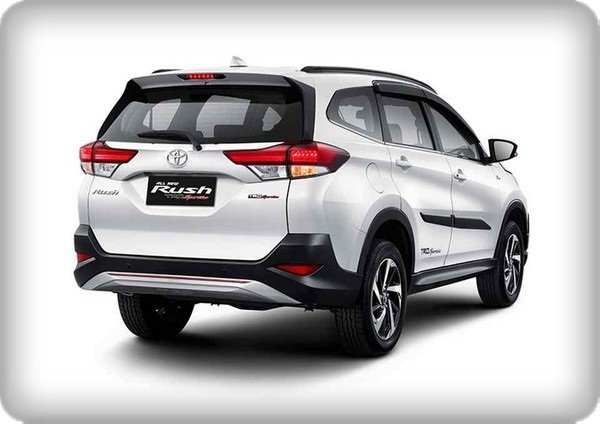 The rear receives a tailgate-mounted spoiler, a diffuser and wraparound taillights

Under the hood, the Rush is powered by a 1.5L 4-cylinder Dual VVT-i engine which is also armed in the Avanza. The engine is capable of cranking out 103 hp and 136 Nm of torque, works in a conjunction with a 4-speed automatic or a 5-speed manual transmission.