Is Hyundai PH bringing in the Venue? The latest teasers tell us so

Updated Oct 13, 2020 | Same topic: Car Sneak Peeks, Teasers, & Rumors
The teasers are a bit cryptic, but our money’s on the Hyundai Venue.

The Hyundai Venue made its world debut in 2019 at the New York International Auto Show. Since then, many are excited to get their hands on the said subcompact crossover.

The world, after all, has developed a deep thirst for SUV and crossover models, and the Venue has the potential to scratch that itch even better than most due to its affordability.

Also, its relatively small size and features make it ideal as a city-going family car. For the same reasons, it can also prove as a great vehicle for first-time car owners. Just look at it. It's compact and stylish. What's not to like?

Currently, the Hyundai Venue is already available in several markets around the world like India, North America, Singapore, and many others. But here in the Philippines, we are still waiting with bated breath.

Hyundai Philippines however, posted teasers on its official Facebook page. As a whole, the picture shows a guy wearing a pair of googles. The longer you stare at the goggles though, you might spot and recognize what looks to be the reflection of the daytime running lights of a car.

And guess what, those lights look really close to the ones on the Hyundai Venue. Hyundai PH also released another image that comes with the peace sign or you could look at it as a cryptic symbol for "V".

>>> Related: 2020 Hyundai Venue would be a great addition to marque’s PH lineup 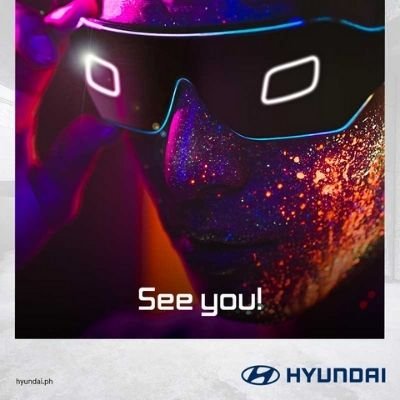 As with most teasers though, we’re still waiting for confirmation whether Hyundai is really launching the Venue or another model. And while it really looks like the DRLs of the Venue, do note that Hyundai also has several new models that are yet to be introduced to the Philippine market. Is this a cryptic symbol for "V"?

Our money though is on the Hyundai-made subcompact crossover. This is just a speculation, but Hyundai PH would do well to introduce the Venue in the Philippines.

That’s because the Philippine crossover market is slowly being taken over by models that come with an attractive price tag such as the Chery Tiggo series of crossovers from Chery, the Geely Coolray, and many others. The Venue would make a great addition to Hyundai PH's model lineup.

Do you think that the teaser is hinting at the local launch of the Hyundai Venue? Do you think it makes sense to introduce it here to the Philippines? For more information regarding this, stay posted here on Philkotse.com.