Ford Focus 2019 release date announced to be in this April

In lieu of showing up in Geneva, the Ford Focus 2019 will be officially released in April.

Instead of making its way to this year’s Geneva Motor Show in early March as many expected, the fourth-generation Ford Focus 2019 has now been officially announced to be released at a standalone event taking place later in April. Before its official debut, the all-new Focus has been leaked with numerous spy shots & teaser images

Besides the 5-door hatchback, a wagon version set to arrive some time this year is also said to be shown at the Ford event. Other models announced to make their debut in 2018 include the posh Focus Vignale and the sporty ST Line. While it still remains unclear about when the sedan Focus will premiere at the moment, latest car news suggests that this event will follow shortly. 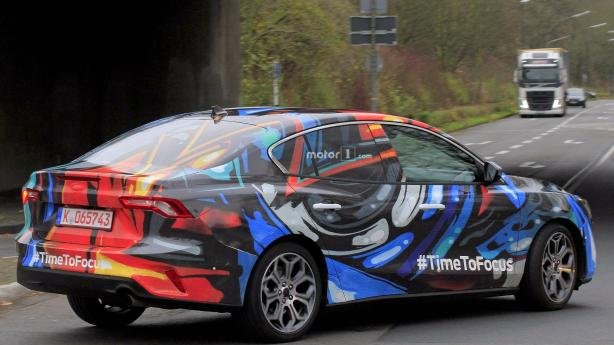 The 4th-iteration Focus seems to receive a far sharper appearance

Prior to its release date, the Ford Focus 2019 has kept fans inquisitive for months due to numerous spy shots as well as official teaser images dropped by the Blue Oval. According to those leaked photos, the 4th-iteration Focus seems to receive a far sharper appearance with a larger overall dimension. Speaking of the interior, the hot hatch is also expected to be heavily revised inside and carried over with some styling cues from its brother Fiesta, particularly the newest Euro-spec model.

While refusing to bring the all-new Focus to Geneva, Ford still has a lot to surprise event-goers. For instance, the facelifted version of the entry-level Ka+ and the revamped Edge are confirmed to be on stage.

Philkotse.com will keep updated with latest announcement from Ford. So stay tuned!

If you are interested in finding further details of the PH-spec version of this hatchback, look at our Ford Focus 2018 review or refer to the table below for the latest price list of the Ford Focus in the Philippines: