This is a crossover concept for “outdoor enthusiast.”

Last month, a very first teaser of the Toyota FT-AC concept was leaked. And finally, the “Future Toyota Adventure Concept” has officially been rolled out at the ongoing Los Angeles Auto Show. For the most part, the FT-AC is actually a concept of the future as its name explicates. In fact, it’s bigger than the RAV4 but smaller than the Lexus RX and Highlander in terms of size. Exterior-wise, a sharp and aggressive fascia dominates the front end with an upside down hexagonal front grille bordered by upswept headlamps and skid plates. Each angular bumper corner now holds LED lights and well-defined edges. As well as that, the front profile seems to be taller thanks to a clamshell bonnet design. In addition, the new Toyota crossover concept is beautified with new fenders and quarter panels with floating flares, which boost the silver and black cladding covering the concept’s lower half. Swooping raked angles are likewise present at the front windshield and tailgate. En passant, the rear facet is currently adorned by slimmer taillights and a rear spoiler. However, it is the retractable bike rack that definitely whets our appetite. This rack can extend from the bumper and when not in use, it can be hidden in the panel. 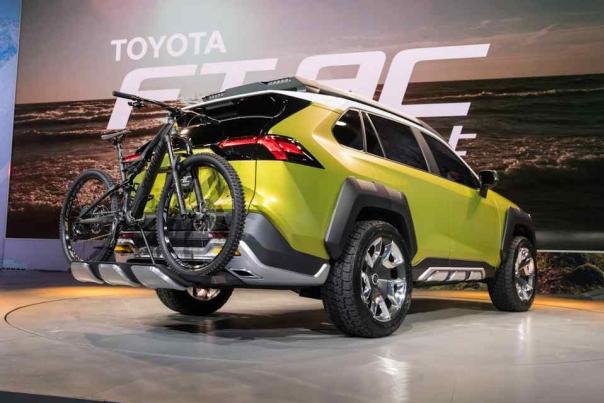 It is the retractable bike rack that definitely whets our appetite

Information about the powertrain has yet to be revealed but latest car news suggests that the FT-AC might be an AWD hybrid with a torque-vectoring.

No words on a production Toyota FT-AC either, but even if this concept can’t come true, it is certain that Toyota will take advantage of its design elements and will apply to other Toyota crossovers. Just wait and see!