Special event series to take a first look at the Mitsubishi Xpander 2018!

Following the announcement of Mitsubishi Motors Philippines Corporation (MMPC) on the Mitsubishi Xpander 2018 for the domestic market, the carmaker is now holding special event series to offer Filipino car lovers a neak peek at the much-awaited MPV. Accordingly, many Mitsubishi dealerships across the country have joined this activity starting in February.

The first preview night already took place on the first of February and good news is there are still four previews held in Mindanao and Luzon within next week. Therefore, if you couldn't make it to the first one, you still have another chance to admire the all-new Mitsubishi Xpander in metal at other preview nights.

If you are into this crossover-MPV, contact the nearest dealership to get more information about the schedule for this special Preview Night event. Worth mentioning is that the Xpander will be on display at the select Mitsubishi showrooms for only one night and during the event, customers can book a unit in advance by paying P10,000 as the reservation fee. 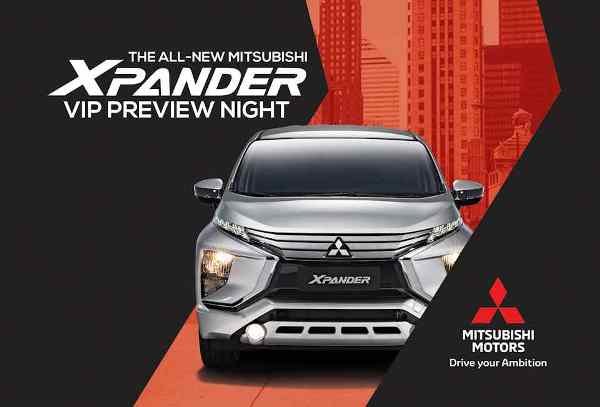 Please refer to the following table for the schedule of the next previews of the all-new Xpander 2018 in the Philippines:

You can access MMPC's official website to get further details of the event series organized at other dealerships nationwide.

Official release date of the all-new Xpander still remains secret at the moment. While waiting for further information, let's discover what's hot and what's not about this MPV through our Mitsubishi Xpander 2018 Review and take a look at the table below for its most updated price list in the Philippines:

In the 7-seater segment, the Xpander is claimed to go head-to-head with the upcoming Toyota Rush. Look through our comparion view of the Mitsubishi Xpander vs Toyota Rush for better consideration.