Wanna see it in the metal? Then visit your nearest Subaru dealership.

Recently, we learned that units of the facelifted Subaru Forester for the model year 2022 are now in the Philippines. For that matter, some are already on display at select Subaru dealerships in the country. The updated Subaru Forester for 2022

That said, Motor Image Pilipinas Inc., the official distributor of Subaru vehicles in the Philippines, is itching to launch the updated crossover. The company previously said that the refreshed 2022 Forester will officially be making its local debut at the Manila International Auto Show (MIAS).

Now that MIAS is confirmed to be happening this April, there’s a high probability that Subaru PH will indeed use the event to formally launch the 2022 Forester. There, it will make an appearance together with other new Subaru models. The car brand has also previously shared the all-new BRZ will also be launched at the said event.

To recap on this new Forester, it was initially introduced in Japan back in August 2021. Style-wise, it looks a bit more aggressive than the outgoing pre-facelift model. Then again, it also gained a degree of more refinement due to the new Subaru “Dynamic X Solid” design language. 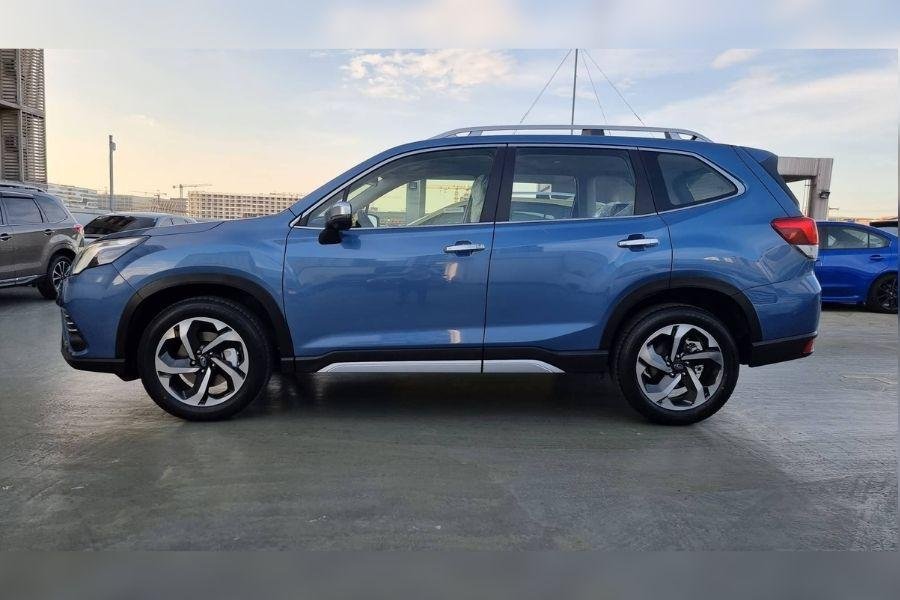 The new Forester from the side

The inside of the new Forester however, looks identical to the one on the outgoing model. There are some new details though, and these come in the form of new seat variations similar to the ones from the Japanese-spec Forester. The new Forester’s seats can now be wrapped in either polyurethane, Ultrasuede, or Nappa leather.

Under the hood, the 2022 Subaru Forester uses a 2.0-liter hybrid e-Boxer engine, or a 1.8-liter turbocharged engine. The hybrid powertrain can make up to 145 horsepower and 188 Nm, while the turbocharged one can produce up to 177 horsepower and 300 Nm of torque.

Those engine options are for the Japanese version of the facelifted Subaru Forester. So as we’ve said before, the Philippine version could most likely come with a 2.0-liter boxer engine. This is the same engine that came on the outgoing Forester, and it can produce up to 154 horsepower and 196 Nm of torque.

Also like the previous Subaru Forester, the local version will be using a Lineartronic continuously variable gearbox, as well as Subaru’s Symmetrical all-wheel-drive. The 2022 Subaru Forester is now in the Philippines

The driver-assist tech on-board the facelifted Forester was also updated, and it now has the EyeSight 4.0. It offers an updated adaptive cruise control, which now has lane centering. It also comes packaged with lane departure prevention, as well as lane departure warning.

Lastly, the facelifted 2022 Subaru Forester will come with only one trim for the local market as of this writing. It retails at Php 2,068,000, which is the same price tag as the outgoing version. This is a plus point considering that Subaru PH didn’t adjust the price despite the new features integrated into the facelifted Forester.

On top of that, the updated Forester will be offered with an introductory price of Php 2,018,000. That’s Php 50,000 off the standard retail price.

If you’re excited for the local launch of the new 2022 Subaru Forester, then keep it here on Philkotse.