2021 Honda Brio: Expectations and what we know so far

A refreshed version of the Brio could still be far from reality.

If you haven’t heard by now, the Honda Brio Amaze is no longer included in HCPI’s lineup. There are different speculations as to why the Brio Amaze was removed from the lineup, but HCPI hasn’t confirmed any of them.

2020 Honda Brio: Not So Mellow for a Canary Yellow | In the Metal

*Disclaimer: This video is the current Honda Brio available in the market. Check out for your reference!

Luckily for the Honda Brio, the 5-door hatchback is still included in the local lineup. This could mean that HCPI still has exciting plans for the Brio. However, HCPI hasn’t released any statement regarding the updates for the 2021 model of the Brio.

As a review, the Honda Brio debuted in 2011 and was introduced in the local market at the 2014 Philippine International Motor Show. And in 2018, the second-generation Brio was introduced in Southeast Asian countries such as the Philippines, Vietnam, and Indonesia.

Initially, the importer of the Honda Brio was Thailand but was reassigned to Indonesia in March 2019 due to falling demands in some markets. With that in mind, we can expect the changes in the Indo-spec Brio to be brought in the country, but just like HCPI, both haven’t released any new updates. For now, here are some of the things we can expect from the upcoming 2021 Honda Brio.

Right off the bat, you will notice that the Brio is a well-designed hatchback. Honda is successful in making the Honda Brio look sporty and flashy especially with the added kits found in the RS variant. This variant offers 15-inch RS alloy wheels, an RS badge on the front grille, black trims on the rear bumper and grille, and a blacked-out roof. 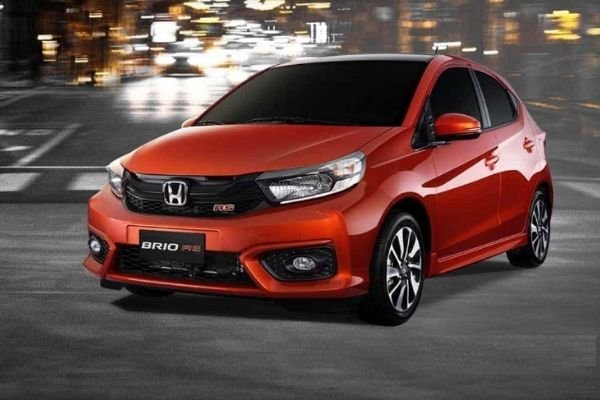 The design of the current Brio has a high probability to stay as is. As such, we think that the exterior features of the said subcompact hatchback will still be the same through next year.

Moreover, the second-generation Brio is only three years old. Honda could launch a refreshed version of it sometime in 2022 or even 2023.

Prior to the unveiling of the new Honda Civic, we got patent images of the interior and exterior features of the compact sedan. We learned that the new interior of the Civic will come with a cleaner design finish. And yes, the patent images were right.

Unfortunately, this isn’t the case for the Brio hatchback. No news and speculations were made as to how the interior of the Brio will look like for 2021. This means that it will still be running with the same black interior, while the RS variant gets orange stitching and trims.

The orange trims on the RS variant are a good touch

For the top-spec RS variant, the seat material used is still fabric just like the base S variant. It would be great to see leather seats even in the RS variants since the hatchback is marketed to be an affordable alternative to the Honda Jazz.

The current Brio HCPI offers in the local market use a 1.2-liter gasoline engine capable of making 89 hp and 110 Nm of torque for all variants. The engine is paired to either a 5-speed manual transmission for the base S variant or a continuously variable transmission (CVT) for the rest of the Brio variants. The blacktop Brio RS variant will cost you an extra Php 5,000

If we can add something to the fray, it would be the 1.3-liter gasoline engine seen on the previous Brio models. This engine is capable of making higher power outputs of 99 hp and 128 Nm of torque. However, since the Brio is sold as a practical and affordable option in the country, it is unlikely to see this engine. The 1.3-liter engine could be added at least to the RS variant for a sportier feel, who knows.

>>> Related: Honda Cars PH is giving away a brand-new Brio to a lucky customer

Honda adding new tech and safety features for the Brio hatchback is highly unlikely. Added tech features would significantly increase the price range of the Brio, which is probably something HCPI is refraining from happening.

As for safety, next year’s Brio is expected to still be equipped with dual SRS airbags, an anti-lock braking system (ABS), a security alarm, and an immobilizer. These safety features are enough for a vehicle marketed to be an entry-level vehicle.

The current Brio sold in the country is the second-generation model that debuted in 2018. As such, it’s safe to say that Honda is not yet planning on launching a refreshed Brio anytime soon. In fact, if you do the math, we can expect a new Honda Brio in 2022 or even 2023.

Despite not having potential updates as of this writing, we still think that the Honda Brio is a strong contender for entry-level hatchbacks. The sporty style, practicality, and affordability are what will keep the Honda Brio in its place in the local market. HCPI offers two hatchbacks in the local market, namely the Brio and Jazz. The Jazz comes with larger dimensions and more features, while the Brio is marketed to be the entry-level vehicle of the Japanese marque. For more details, check out our list of Honda Brio 2021 price Philippines.