Updated Dec 11, 2020
Editor's rating 4.5
User's rating 5.0
Read on to know why new Hyundai Veloster 2019 is a super strong rival of Honda Civic on the Hatchback segment.

Ahh, Hyundai. Whenever people saw and heard the name and their products, they tend to remember that good ol’ scrappy but definitely giant of a company that produces very affordable, very economical cars that are easy to maintain.

Cars that had no frills, no fuss about them. Some might say that Hyundai cars lacked a certain “it” factor that other Asian car manufacturers had. And performance? For Pete’s sake, they even joked about it in one of those Fast and Furious movies (Was it the Tokyo Drift one? We can’t exactly remember). But that was quite a time ago. Now comes the Hyundai Veloster sports coupé, first released in 2011 starting in Korea, followed by Canada and the United States. The Veloster was intended to fill the gap left behind by the Tiburon which, as Hyundai’s first attempt at a global sports coupe, wasn’t exactly well-received in part due to its rather anemic (105 hp) engine.

Based on the PB platform which it shares with the Hyundai Reina, Kia Pegas, and the Hyundai HB20, the Veloster is a more modern vehicle than the model it replaces. After enjoying much success with its range of variants, the first-gen Veloster was replaced by the second generation model, first revealed at the 2018 North American International Auto show.

This article will be featuring the Hyundai Veloster 2019 Turbo which comes with significant upgrades, from the design, interior, amenities, engine and many other features that all in all make it quite a desirable performance vehicle, although it’s not without some quirks that are best left to the beholder’s eye to decide whether it’s fine or not.

Now let’s dive into the nitty-gritty of the Hyundai Veloster Philippines Review brought by Philkotse.com.

The previous version of the Veloster looked nothing like other cars in the market. People bought it because it looked unique with its famously asymmetrical yet very performance-oriented design, which to some still made sense as a family friendly hatchback. Suffice it to say, this still carries over to the new 2019 Hyundai Veloster exterior.

For someone who has just seen the Veloster though, one would immediately notice the differently-sized doors, with the front ones larger than the rear one. A design quirk present since the first generation is that the Veloster comes with only three doors.

One each for the driver and front passenger, and one installed at the starboard side of the car for the rear passengers. This might get some taking used to for those who are very keen on symmetry, but otherwise, they function as intended. Expect a lot of car people to be weirded out, this will pique their interest, at the very least. 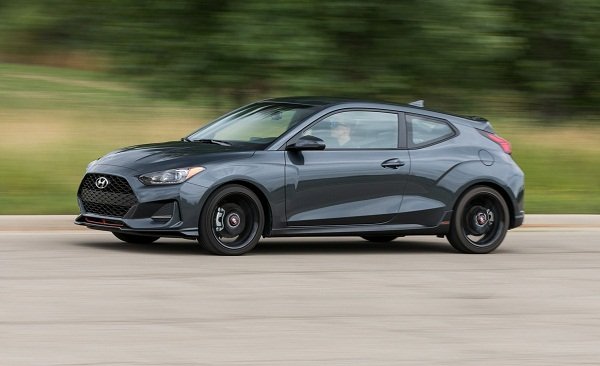 The asymmetrical design of the Hyundai Veloster Turbo might take some getting used to, but the car itself really looks good

When looking at the 2019 Veloster's front, one can definitely see the hallmarks of Hyundai’s Fluidic Sculpture philosophy, especially on the front grille, the headlamps and the chiseled profile.

The new Hyundai Veloster exterior retains more or less the same dimensions as its predecessor, with the new version only an inch longer and less than an inch wider. What’s also different is that current version sports a more aggressive look mainly due to the wider grille, larger fender flares, functional air inlets, diffuser, and 18-inch wheels.

The separate LED lights on the bottom part of the headlights make it look cheap, and if you squint hard enough your Veloster now looks like a Kia Stinger. The fake vents are a bit flamboyant, especially the front ones with those chrome strips. Not too keen on those. The rear of the 2019 Veloster is a sloping affair that abruptly cuts off the profile with a vertical surface. This design is called a Kammback (named after German aerodynamicist Wunibald Kamm) and is commonly used on sports cars for better performance, and on hybrid vehicles for better fuel consumption.

Moreover, Hyundai brings for the 2019 Veloster a more tastefully modern design and one could say that the Kammback definitely made a comeback in a hatchback. A very hot one. 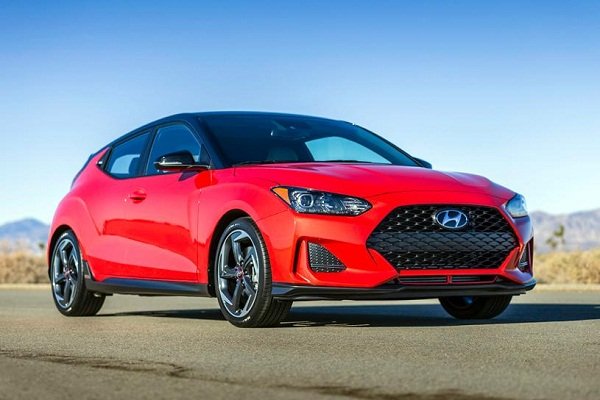 Aside from having a sporty design, the rear is also a very functional portion of the car, offering up to 19.9 cubic feet of trunk space. Folding the rear seats down expands this to a considerable 44.5 cubic feet for carrying larger-sized cargo. Also noteworthy is the rear diffuser which, in combination with the center-mounted twin exhaust, gives the Veloster a clean yet aggressive look.

Gazing upon the 2019 Hyundai Veloster Interior, one immediately notices the stark difference between the front passenger’s dashboard and the driver’s side which is filled to the brim with easy-to-reach controls. The one issue with the Veloster’s interior, however, is the hard plastic material which Hyundai has used with many of the interior panels and dashboard. Not very premium-looking, unfortunately. Overall the seats are comfortable, especially the front bucket seats which can definitely hold you in place when tackling corners at high speed. Headroom is sufficient at the rear, but legroom is rather cramped, especially for taller occupants.

When it comes to performance, Hyundai Veloster Turbo 2019 is no slouch, able to generate 204 horsepower at 6000 RPM and 27 kg-m of torque from its Euro 4 rated 1.6L T-GDI (turbocharged-gasoline direct injection) powerplant.

The engine delivers a low rumbling sound which some might find lacking, considering the power it delivers. But despite the front wheel drive layout, the Veloster is quite fun and punchy on the road. Just don’t expect it to be tail-happy, though. The heart of the Hyundai Veloster 2019: the Turbo engine

When it comes to the transmission, the dual-clutch gearbox of the previous generation switched gears rather sluggishly. The new Hyundai Veloster rectifies this with a new 7-speed DCT, featuring different driving modes which give the Veloster a wide breadth of adaptability on a multitude of driving surfaces.

The steering of the Veloster is quite capable of tight corners as it has MDPS or motor-driven power steering, making the car highly maneuverable and agile for autocross enthusiasts. Compared to the previous Veloster, the improved suspension makes the new one more capable of hugging corners as well as shrugging off potholes and bumps. The firmness of the Macpherson strut/multi-link suspension makes the 2019 Veloster very much a driver’s car.