What’s on your mind while flipping through mesmerizing images of the Mitsubishi e-Evolution Concept?

The 26th Gaikindo Indonesia International Auto Show 2018 (GIIAS 2018) is now open its door to public at Indonesia Convention Exhibition (ICE) BSD, Tangerang. This is a good chance for auto giants, including Mitsubishi to show off its new superb vehicles and concepts.

Coming to this car event, the Japanese car manufacturer has lots of stars to show off, especially the all-electric high performance SUV Mitsubishi e-Evolution Concept which conclusively demonstrates the brands’ new global tagline – “Drive your Ambition”.

In fact, “Drive your Ambition” was first announced at the last year’s Tokyo Motor Show. This tagline is the new brand strategy to have tremendous drive to explore beyond limit and show progressive and adventurous mindset of the marque to turn out more inspirational design and vehicle with value of EV, SUV, and New System.

Now, give words to our vedette – the Misubishi e-Evolution Concept, which was first unveiled at 2017 Tokyo Motor Show. 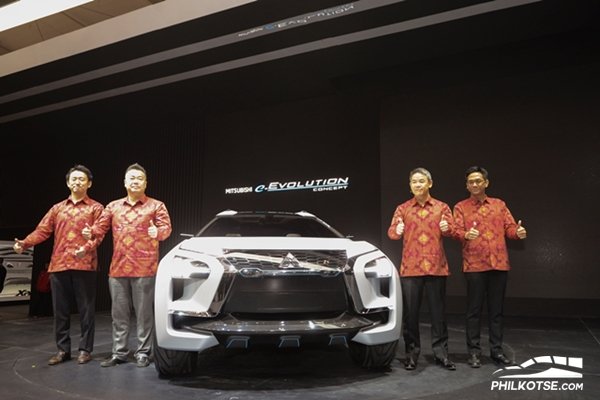 Illustrating the brand’s strategic directions, the e-Evolution Concept is a technical prototype which integrates strengths of EV, SUV and as we’ve mentioned, the ability to incorporate new systems for an associated mobility customer experience.

Try not to drool too much while feasting your eyes on the side facet. Decked with short overhangs and sharply slanted front windshield, we believe that you have never seen such a unique side profile in any four-wheeled model before. Other than that, strong shoulders, high ground clearance and narrow hips also give a demonstration of agility, litheness and plus, robustness seen in muscular tires and bars. 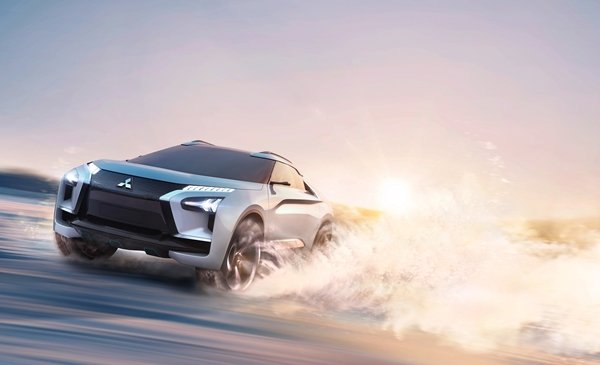 Under the sheet metal of the Concept are 3 torqueful electric motors. Worth noting is that a big internal combustion power plant is presently absent from this prototype, which makes room for a radically novel cockpit with instrument panel seemingly floating under the nose of the driver. As per the instrument panel, it features the company’s signature horizontal styling with the emphasis on information above the axis and on operation below.

Spanning the full width of the dash is a massive flat screen that tells the drive navigation, outside conditions, and coaching information to boot. It’s also sided by 2 smaller screens which display images from cameras at the front and rear. Better still, full glass windows providing near unblocked 360° visibility exude a feeling more like a jet fighter rather than an automobile.

Referring to new technologies in the Mitsubishi e-Evolution Concept, three outstanding systems that we can pass over, including:

As reported in our previous article, aside from the e-Evolution Concept, Mitsubishi also brought its hit Car of the year 2018, the Mitsubishi Xpander to the car event which comes with new options and tweaks. Notably, in Indonesian market, the Ultimate and Sport trim is painted new Deep Bronze Metallic hue. To expand the roster of variants, the automaker also introduces two new grades: the Misubishi Xpander GLS AT and Sport MT. Mitsubishi also brought its hit Car of the year 2018, the Mitsubishi Xpander to the car event In March 2018, the Mitsubishi Xpander was officially rolled out in the Philippines, stirring up massive excitement among Pinoy car enthusiasts. The Xpander is said to go head-to-head with the Toyota Rush in the local motoring market.

You can look into the Xpander vs Rush comparison published earlier on Philkotse.com to gain a clearer understading of both the pros and cons of each vehicle. Also, find below the latest updated Mitsubishi Xpander 2018 price list in the Philippines: