The 2021 Chevrolet Colorado ZR2 made its debut at the 2019 SEMA Show in Las Vegas, an aggressive trail conqueror that's a sign of things to come for Chevrolet's midsize pickup. This represents a mid-cycle refresh for the 2021 model year, with Chevrolet incorporating exterior tweaks, making it easier for buyers to tell the 2021 trims apart. The front grille now hews more closely to the one on the new Camaro SS, with enormous skid plates and chunky tires. The old-school Chevrolet branding returns, writ large across the tailgate. It seems like Chevy's bringing back the fantastic stuff, huh? You'll see the old-school 'Chevrolet' branding across its tailgate

>>> Have you known about the latest Chevrolet Colorado Trail Boss 2020?

It also sports a new look, influenced by the range-topping Bison. A new, punched-out front bumper dominates the fascia, significantly expanding the blacked-out elements of the ZR2. A flow-through grille with the “Chevrolet” crossbar improves driver visibility. Aside from that, there aren’t many changes to the Colorado ZR2. The model retains its off-road look, while the two-inch lift kit and the 3.5-inch wider track compared to the road-focused Chevrolet Colorado 2020 greatly contributes to the car’s offroad stance. 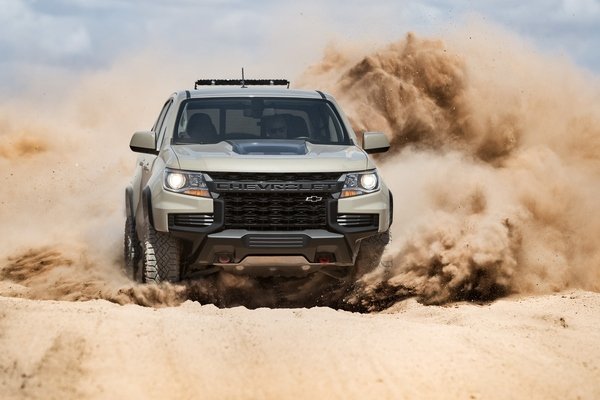 The new truck looks stunning, even when kicking up dust

>>> Refer to Chevrolet Philippines price to update the latest changes.

The Colorado ZR2’s interior and mechanicals didn't change much, either. The model still offers the same 2.8-liter turbodiesel engine and the 3.6-liter gasoline mill that make 181 and 308 hp, respectively. The diesel may not sound much on paper, but it's good for up to a decent 500 Nm of torque, 127Nm more compared to the gasoline variant. Only time will tell if Chevrolet will bring this beast here for Filipino offroad enthusiasts to enjoy.

Keep up with the latest news, reviews, and insights on local motoring with Philkotse.com!