Which of these Japanese-branded trucks are better on paper?

Without a doubt, Filipinos like pickup trucks because of their versatility. We often use it as a workhorse, a family hauler or an all-around lifestyle vehicle. Choosing a pick-up truck, however, can be daunting, with a wide selection of popular models right now in the Philippines. Two of those are currently leading the pack: the Toyota Hilux vs Nissan Navara.

Between two Japanese brands, which one has the more impressive spec sheet? Let’s find out by comparing the Toyota Hilux Conquest against the Nissan Navara Pro-4X. In the Hilux vs Navara size comparison, the Toyota model is slightly longer and wider than the Nissan model. The latter however, does come with a longer wheelbase. As for exterior equipment, both the Hilux Conquest and the Navara Pro-4X come standard with LED headlamps, front fog lamps, LED daytime running lamps, and LED taillights. Both of their headlamps also come with auto-leveling, and both have power-folding side mirrors.

Inside, both the Hilux Conquest and the Navara Pro-4X can seat up to five including the driver. Both also provide their occupants with an automatic air-conditioning system, though the Nissan model has rear vents. Also common between the two truck models is a leather-wrapped steering wheel, a tilt-adjustable steering column, an analog gauge cluster, a push to start button, cruise control, an auto-dimming rearview mirror, and manual adjustment for the front seats.

Both also have dark-themed interiors, though the seats on the Navara Pro-4X are wrapped in leather. The Hilux Conquest’s seats in turn are clad in fabric. Inside the Navara Pro-4X

For on-board entertainment, both the Hilux Conquest and the Navara Pro-4X are kitted out with an eight-inch headunit. Both of these features Apple CarPlay, Android Auto, Bluetooth, and USB connectivity. Both are also linked to a six-piece speaker system.

Under the hood, the Hilux Conquest uses a 2.8-liter inline-4 turbodiesel engine that can produce up to 201 horsepower and 500 Nm of torque. It then uses a 4x4 drivetrain, and a six-speed automatic gearbox. Meanwhile, the Navara Pro-4X is propelled by a 2.5-liter inline-4 turbodiesel good for 190 horsepower and 450 Nm of torque. The said engine is then paired with a seven-speed automatic gearbox. It also has a 4x4 drivetrain.

With that said, the Hilux makes more horsepower and torque than the Navara. Both trucks then come fitted with a rear differential lock.

Suspension-wise, the Hilux uses a double-wishbone front suspension, and a leaf spring rear suspension. The Navara also uses the same suspension type for its front, though its rear instead comes with a multi-link type suspension. Both trucks have a front disc brake and a rear drum brake. For airbags, the Hilux has seven, while the Navara has six. Both trucks do come with a 360-degree view camera.

All-in-all, both the Toyota Hilux Conquest and the Nissan Navara Pro-4X are great all-rounders for the Philippine setting. Both are capable haulers, and both can function as a comfortable daily driver. Which truck looks better the rear? Is it the Hilux Conquest?

For those who need extra safety though, the Navara might be the one to go for. It has the Nissan Intelligent Mobility suite after all.

In turn, those who are in need of power out of their trucks might want to lean towards the Toyota. Or is it the Navara Pro-4X?

So which is better? Well, that depends. You’ll have to find that out for yourself by giving each of these truck models a test drive. 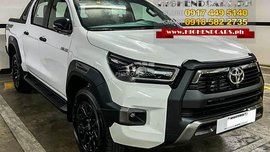