Mirage G4 GLX vs GLS: Save more or Get more?

Many Filipino car buyers are torn between the Mitsubishi Mirage G4 GLX and GLS variants. Let us give a short comparison review to help you find the better option.

Subcompact sedans are currently one of the most sought-after vehicles in the local auto market thanks to their compact boy dimensions, fuel-efficient engine, and especially, a reasonable price point. Not only that, this kind of car is well capable of housing up to 5 passengers and its boot space can load lots of your family’s stuff.

Filipinos have a free choice from a wide range of subcompact saloons available in the market today such as the Toyota Vios, Suzuki Dzire, Honda Brio Amaze, Nissan Almera, Volkswagen Santana and surely, our vedette in this show today – the Mitsubishi Mirage G4. The Mirage G4 is the sedan sibling of the Mitsubishi Mirage hatchback. Not only does it look as upmarket and trendy as its 5-door rivals in the tightly-contested segment, the sedan also has too many things to offer in terms of versatility, owing to a longer wheelbase and larger trunk. Under the hood is a 1.2L 3-cylinder MIVEC engine mated to either a 5-speed MT or a CVT.

For 2019, the Mitsubishi Mirage G4 is offered in 4 variants totally:

Putting aside the base variant GX that is simply equipped with basic features, Pinoy car buyers will be bewildered by opting for a better option between the GLX and GLS. Though the GLS is the top-of-the-line, the GLX is still loaded with lots of advanced features. If you’re mulling over saving an amount of money or experiencing the highest variant of the lineup, this car comparison by Philkotse.com will definitely help. Let’s find out.

Speaking of the exterior design, everything seems indistinguishable in these two trims from bumper to bumper, but for several small details.

First, the chrome-surrounded fog lamps which are only available in the upper-spec. Even if you want to equip the GLX with this, the sales agent will certainly say “No”. Yes, the GLX’s front grille is merely decked with basic black plastic finish.

One more feature, on the GLX, the LED turn signal lamps are mounted on the fender while these lights are located on the power side mirrors on the GLS.

The last dissimilar thing is the wheels where the GLS comes with 15” Bridgestone Potenza rubbers with silver aluminum alloys whereas the GLX runs on smaller 14” Brigdestone Ecopia radials mounted on steel wheels. 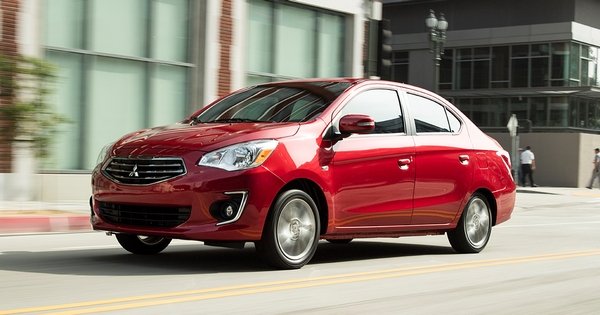 On the GLX, the LED turn signal lamps are mounted on the fender while these lights are located on the power side mirrors on the GLS

So, needless to say, the Mirage G4 GLS is a better choice for those who give ear to outer look.

Inside, the Mitsubishi Mirage G4 is fitted with a straightforward interior theme together with piano black trims on the centre console, gear lever, door panels and steering wheel which are on tap for all grades. However, a push start button and automatic climate control system can only be had on the top-spec GLS. The lower-trim GLX is furnished with manual AC at best. 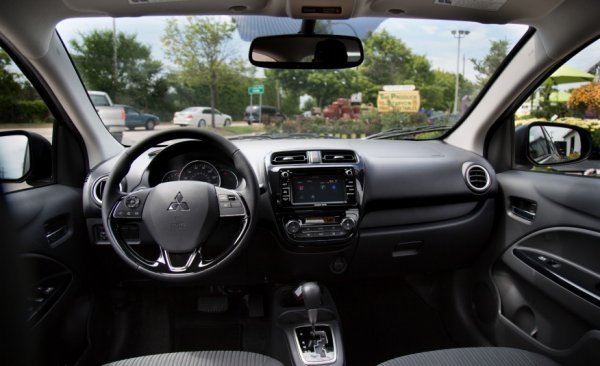 Inside, the Mitsubishi Mirage G4 is fitted with a straightforward interior theme

Regarding entertainment system, 2-DIN infotainment system are both available in these two variants, integrated with CD, MP3, Tuner, AUX jack, USB port, and Bluetooth. What differentiate them are the speakers. Two speakers for the GLX and four ones for the GLS. Hence, if enjoying musical festival in car is your important life vibe, opt for the one with more speakers.

In this round, surprisingly, the GLX is victorious.

The 1.2L 3-cylinder engine is the only option across the Mitsubishi Mirage G4 lineup, yet on each trim, the power it delivers is divergent. In fact, at 6,000 rpm, the GLX ekes out 78 horsepower while the GLS is only capable of 76 hp. As for the number of torques, both models have the same 100 Nm at 4,000 rpm. The 1.2L 3-cylinder engine is the only option across the Mitsubishi Mirage G4 lineup

The Mirage G4 GLX and GLS are both fully armed with standard safety features like driver’s and front passenger’s airbags, immobilizer, and ABS. Nonetheless, as the range-topping trim, the Mirage G4 GLS is mollycoddled with Electronic Brake Force Distribution and ISOFIX which are absent from the lower-spec GLX.

6. Mirage G4 GLX vs GLS: Price in the Philippines

As mentioned earlier, should you want to save a consider amount of pesos, purchasing the GLX is advisable. Buying a MT-equipped GLX will set you back P666,000 while a CVT model is P54,000 more expensive. In the meantime, the GLS price ranges from P816,000 to P867,000 for the MT and CVT, respectively.

Even though it is a bigger-budget model; come to think of it, the GLS has got more decent look, more accessories on the inside and more safety devices. The Mirage G4 GLX, despite the fact that it cranks out more pulling powers, to a large extent, it still cannot blow the GLS out of the water. No matter what version you go for, the GLS or GLX, keep in mind that taking a test drive is a crucial step

In closing, the Mitsubishi Mirage G4 is truly an ideal pick for Filipinos who are in the market for a subcompact sedan. No matter what version you go for, the GLS or GLX, keep in mind that taking a test drive is a crucial step to make sure the car you chose is comfy and suits your needs. Wish you will find your car soon! 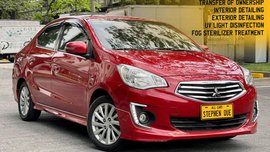