Four years with the Mitsubishi Mirage G4 GLS 2013 is no illusion.

The Mitsubishi Mirage G4 has been around for five years now, yet it’s still going strong in the Philippine market. The subcompact sedan has become so ubiquitous that you probably won’t even spend two minutes glancing at the street without seeing one pass by.

Little surprise there, considering that Mitsubishi Motors Philippines Corporation (MMPC) posted a record-breaking 73,590 units in 2017, growing 19.9% from the previous year and marking the company’s 11th straight year of growth. Of that number, 20,690 units sold were from the passenger car category, where the Mirage G4 belongs. (Click here to read full sales report of MMPC in 2017).

That the subcompact sedan has made it this far is proof that MMPC had the right formula on its hands when it first released the Mirage G4 in 2013, as a follow up of sorts to the Mirage hatchback launched the previous year; after all, the hatchback was already a tempting proposition for urban drives with its small size and fuel economy. But the Philippines being primarily a sedan market, the added cargo space was probably the final touch in coming up with a winner.

We’ve had our trusty Mitsubishi Mirage G4 GLS 2013 for four years now, acquiring it back when it was still imported from Mitsubishi’s Laem Chabang plant in Thailand (newer Mirage units have been assembled in the Philippines since February 2017). Despite a few niggles, it has largely been a pleasant surprise to drive, even to places I never thought it could handle.

So what does four years of owning a Mirage G4 look like? Look through our long-term review on Philkotse.com to find the answer.

Our next 2 parts in the review series can be found at:

Truth be told, we almost missed out on the Mirage G4 wave, simply because of superficialities. The hatchback’s smaller dimensions and cleaner-looking fascia looked way cuter than its bigger sedan sibling, whose bulbous silhouette and gaping grille reminded me of a manatee on wheels. It has a more bulbous silhouette than its hatchback sibling

It was the mindset we had when we set out on a quest for a new car, and having both the hatchback and sedan side-by-side in the showroom didn’t help the sedan’s case as far as looks were concerned.

Of course, the Mirage G4’s larger size was a necessary consequence of its purpose as a sedan, which increased both interior and cargo space significantly over the hatchback.

And to a certain extent, the Mirage G4’s design echoes that of the second-generation Toyota Vios, which it was likely benchmarked against; thankfully, the Mirage G4’s instrument cluster sits behind the steering wheel, which makes it easier to glance at. The Mirage G4 does resemble the Gen 2 Toyota Vios

More than the shape, however, was the fact that the Mirage G4 offered a number of features normally found in more upscale models at such an affordable price, especially for the upper-spec GLS variant which we had been considering. 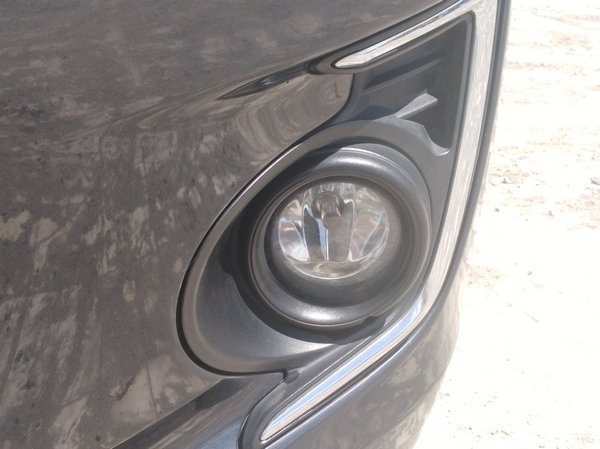 For one thing, it came with foglights surrounded by chrome trim, something that even more expensive base-model MPVs didn’t have. Actually, the entire GLS grille was rendered in chrome, which we found a bit too flashy; I tried asking the sales agent if it was possible to have it swapped with a GLX grille which was done in a basic black plastic finish, but he said no. In any case, the grille’s larger opening was better for engine cooling, and the shape looked like it took a cue from Superman’s crest, the similarity becoming more evident on a G4 with blue body color. The LED turn signal lamps mounted on the power side mirrors was another nice touch, shining a bright amber whenever I toggled on the control stalk before executing a turn or when I hit the hazard light switch. It adds a layer of visibility to oncoming drivers, which makes it safer when driving in low-light conditions. 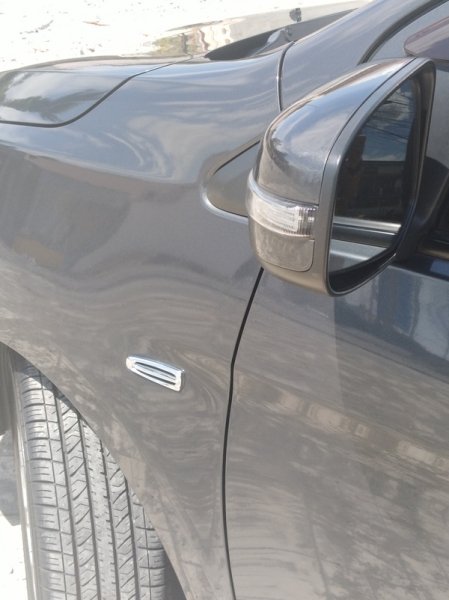 Turn signal repeater on the side mirror. ON GLX models, the light is located on the fender.

Where the GLX variant had 14-inch Bridgestone Ecopia radials mounted on steel rims with wheel covers, the GLS came shod with 15-inch Bridgestone Potenza rubbers sporting silver aluminum alloy wheels, that make for a more premium look. The gemstone grey mica body color we selected contrasted nicely with the alloys, which I still prefer over the gunmetal grey ones that were later offered as standard on the GLS. Silver alloys were standard equipment for the GLS

The rear defogger was also a feature I appreciated on the Mitsubishi Mirage G4 GLS 2013, especially when driving in rainy weather reduced visibility at the rear. Our previous car, a Mitsubishi Adventure, came equipped with a smallish rear wiper that had a limited arc, so I could only see a small portion of the rear view, compared to the defogger that dissipated the moisture more evenly.

One of the things I appreciate the most on the Mirage G4 is the relatively high 170mm ground clearance, which has helped me avoid hitting tire stops, raised sidewalks, and all but the steepest parking ramps. I can also negotiate those short but high speed bumps with ease, although I still have to approach them at an angle, more to reduce that jarring sensation than anything else. Rear antenna sticks out a little too much

I feel that a sharkfin antenna on the roof could have given the Mirage G4 a sleeker though, since the screw-on type sticks out too much like Alfalfa’s hair. And the door handles are a throwback to the 90s. Even though I do find chrome too flashy, we had chrome covers installed on the handles to break the color monotony as well as add visibility at night. 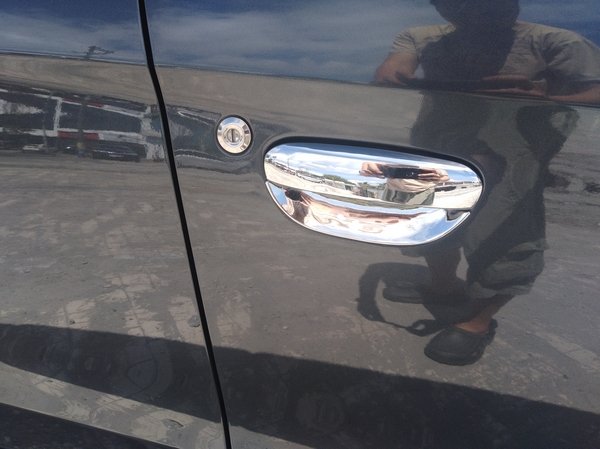 Keyhole on the right passenger side, for emergencies using the spare physical key on the remote fob.

So the hatchback was initially high on our list over the sedan in terms of aesthetics. But as soon as we inspected the interior on both models, things suddenly shifted in the G4’s favor.

Viewed from outside, the Mirage G4 is deceptively small, yet the interior is cavernous for its size. Although the sedan was presumably engineered on the same platform as the hatchback, the former still has the benefit of longer dimensions. That was pretty much evident in the cabin, with the Mirage G4 having significantly more legroom in the rear seating area; Mitsubishi didn’t have to scrimp on space since there was a dedicated area for cargo, unlike on the hatchback. This resulted in rear seats that are more contoured for better comfort, in contrast with the more bench-like setup on the hatchback. Even better, the Mitsubishi Mirage G4 GLS 2013 has three 3-pt. seatbelts at the rear, although the middle part feels a bit narrower and stiffer compared to the side seats. In the absence of a third passenger, the middle panel can fold down to reveal two hidden cupholders, complementing the other two under the dashboard and another one behind the handbrake. For families with small children, ISOFIX anchors placed near the rear glass let you use child car seats safely and securely. 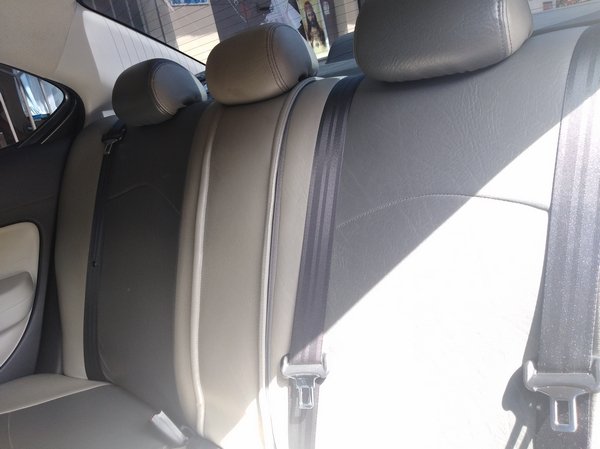 The rear seat has seatbelts for three occupants 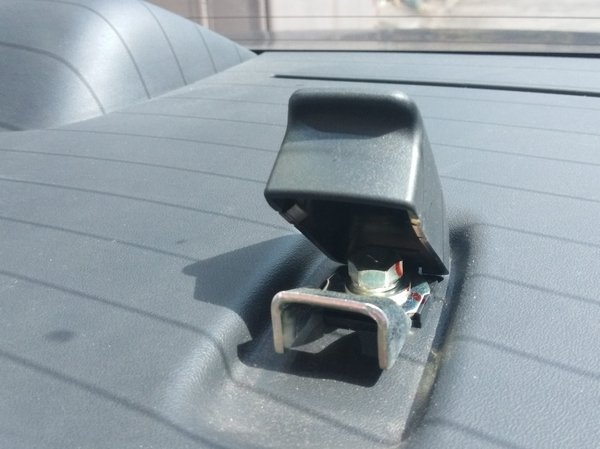 Front space on both models were identical, with somewhat narrow driver and front passenger seats that both have adequate legroom and adjustable forward and backward. Although the driver’s seat has a manual height adjustment via a knob on the left side, even the highest setting still feels negligible. Nevertheless, it’s not that much of an issue since the front seats have a high hip point. Combined with the Mirage G4’s low beltline, this affords front occupants with a better view of the road ahead. 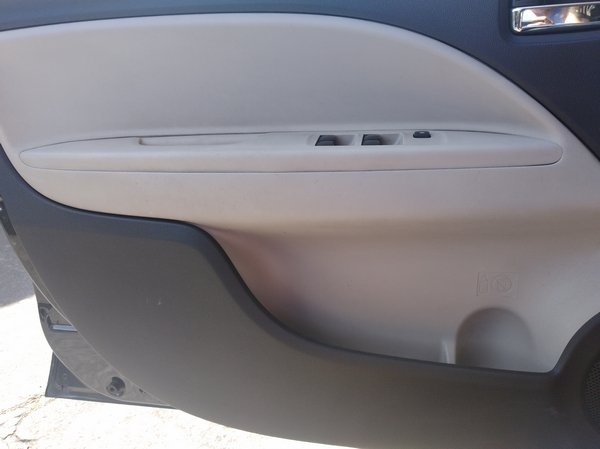 Side pockets inside the front door panels

The front doors have integrated pockets for small items, and they even have holders for bottled beverages, in addition to the twin cupholders on the center console. The rear doors don’t have this feature, which means that aftermarket seat covers with pockets (or seatback pocket organizers) are a must for passengers at the back. All door panels have textured plastic surfaces with no cloth inserts, making them easier to wipe clean. 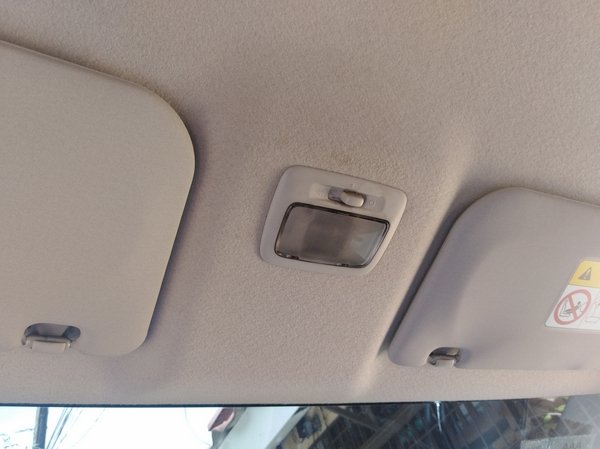 Cabin light mounted near the front of the ceiling

A single cabin light located near the rear-view mirror provides the illumination for the interior, although the rear seat area doesn’t benefit from it as much as the front. It would have been better if the cabin light had a more central location. 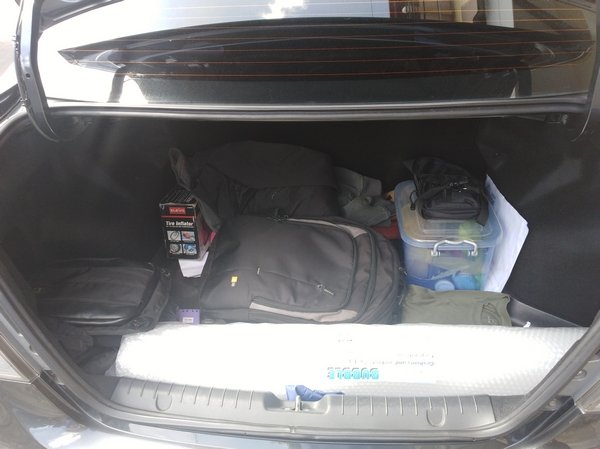 The G4 actually has a larger trunk than the Lancer

The Mitsubishi Mirage G4 2013 trunk is even more noteworthy; at 450 liters, it’s actually more spacious than the rear compartment of the G4’s larger Lancer stablemate, so much so that I could fit a folded full-size wheelchair inside and still be able to close the trunk lid shut. Too bad the rear seats are not collapsible, which would have expanded cargo capacity significantly. Nevertheless, the cavernous trunk still makes the Mirage G4 a good family car.

Through this post, Philkotse.com has given a fair review of the Mitsubishi Mirage G4 GLS 2013 in terms of its exterior styling and interior layout. To gain a more comprehensive insight into this subcompact sedan, click here to read the second part, reviewing its Controls & Performance. The last part coming up next will reveal most common issues that drivers will probably encounter during their ownership. Stay tuned! 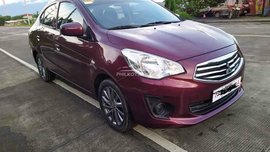