Read on the head-to-head battle of Nissan Terra vs Montero Sport: The newbie vs the grizzled veteran. Which model comes out on top? Let's check out!

While the Nissan Terra is relatively new to the Philippine mid-size SUV game, it is quite apparent that the Nissan made SUV has caught a lot of attention because of the power it makes, because of its comfortably beefy size, and of course…who wouldn’t like a new face in a segment dominated for years by familiar and quite grizzled veteran SUV models. One of those veterans in the mid-size SUV segment in the country is the Mitsubishi Montero Sport which is known to be packed full of useful features and is quite possibly the best performing SUV for years now by virtue of its excellent handling and power. Despite being around for quite a while now, the Montero Sport has a new look and is prepared for the competition

So how does a new and fresh yet powerful rookie like the Nissan Terra fair against the very well-known Mitsubishi Montero Sport? Let’s find out in our head-to-head Terra vs Montero comparison brought to you by Philkotse.com

Note: For this article, we will be comparing the top of the line variant for each model to keep it simple. That’s the Mitsubishi Montero Sport GT 2.4 4x4 AT and the Nissan Terra 2.5 4x4 VL AT. We will however mention other variants for each SUV whenever it is relevant.

Based on the table comparing the dimensions of Nissan Terra vs Montero Sport, we can plainly see that the Nissan Terra is significantly larger in almost all categories. The Terra is 100 mm longer, 50 mm wider, has 30 mm more height, has a longer wheelbase by around 50 mm, and it has a higher ground clearance. The rear of the Nissan Terra Here's the rear of the Montero Sport, otherwise known as the Pajero Sport in other countries

While this means that the Nissan Terra will potentially have a much more generous interior space, many have said that the smaller Montero Sport is actually one of the best handling mid-size SUVs available right now.

Take note though that the Nissan Terra has a five-link coil spring with a stabilizer bar for its rear suspension which will make it better with regards to off-roading compared to the Montero Sport’s three-link rear suspension. Couple that fact with Nissan Terra generous ground clearance, and you have a winner in terms of off-roading capabilities. When it comes to paved roads though, the Mitsubishi Montero Sport is quite well known to have minimal body roll and is quite responsive even on sharp corners.

So in short, if you will have to pass through rough and sketchy roads on the regular, go with the Terra. If you don’t, go with the Mitsubishi Montero Sport.

As for looks, well, that’s up to you. But if we have anything to say about it, the Terra is brusque and utilitarian, and tough-looking while the new Montero Sport GT is futuristic and elegant. Both though, look really good. Here's the Mitsubishi Montero Sport looking as elegant as ever

>>> Full-scale review of each model can be found at:

Now with regards to the interiors of the Terra VL and the Montero Sport GT, it’s a bit of a mixed bag. As you can see from the table, the two top of the line variants has the same amount of toys.

The Nissan Terra 2019 though has a larger touchscreen that comes with Apple CarPlay and Android auto whereas the Montero Sport has a smaller 6.7-inch unit. The Montero’s set of speakers does have two tweeters so those who are particular with their sound might like that. And of course, the Montero Sport GT comes with a sunroof. When it comes to how one operates the off-road modes on these vehicles come with easy to use 4x4 features. The Terra has a part-time 4WD with a transfer select switch while the Montero Sport comes with the Super Select 4WD-II with off-road mode. Both have 2H/4L/4H modes which will greatly improve traction.

In terms of comfort, it is noticeably more spacious in the Terra while inside the Montero’s it is snug but still really comfortable. 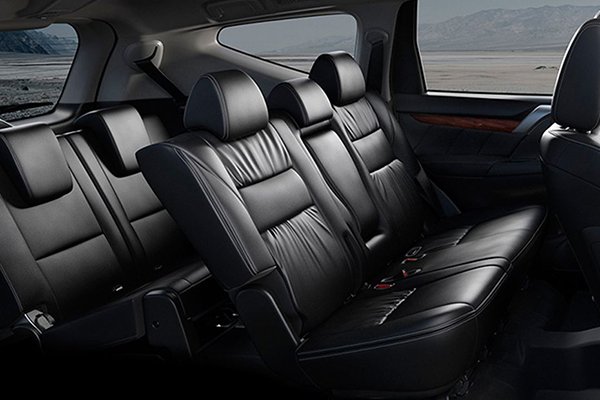 Here are the ones on-board the Terra

Even while Mitsubishi recently launched the more powerful Montero Sport GL, it still falls a bit short of the power that all the variants of the Nissan Terra can make. Here’s a table to help you see the difference:

Also, the Nissan Terra’s 450 nm of torque peaks earlier at 2,000 rpm whereas the Montero Sport’s 430 nm peaks at 2,500 rpm. This means that the Terra will have earlier access to all the force which is essential in off-roading and acceleration from a standstill.

In terms of safety, the Mitsubishi Montero Sport 2019 appears to have one-upped the Nissan Terra by way of a Knee airbag. As for common safety features between the two, both have curtain airbags, side airbags, and dual front airbags.

Take note though that the Nissan Terra’s base variants still have those airbags except the knee airbag which the top of the line Montero Sport does have. The Base Montero only has dual front airbags.

The Nissan Terra does have the Intelligent Around View Monitor which provides a simulated but otherwise accurate view of the vehicle’s immediate surroundings as well as the Intelligent Rear View Mirror which in short, is more than just a rearview mirror as it comes with an LCD screen which will provide a LOT of added visibility.

While we like to compare similar vehicles in a market segment, the Nissan Terra and the Mitsubishi Montero Sport each have their own appeal. And in choosing one over the other, the final choice will inevitably come from you the buyer.

But if we have to choose though, we’d have to recognize the newcomer, the Nissan Terra’s good distribution of safety and entertainment features as well as its powerful engine across all of its variants.

The Mitsubishi Montero Sport, however, by virtue of being around for such a long time, has a solid reputation and in lieu of its variants, its range of prices are much more versatile for a prospective buyer. Overall though, the Nissan Terra is cheaper while bringing you around the same amount of features.

So which do you prefer? A Terra or a Montero Sport? Or the brutishly beautiful newcomer...