Here's your checklist when buying a repossessed car [Philkotse Guide]

We’ve talked about repossessed cars before and established that buying one has its own set of pros and cons. It comes with advantages like a lower price, most of them are barely used, and the bank might even make it easier for you to get approved for financing.

On the other hand, buying a repossessed car will come with its own disadvantages like hidden mechanical issues, and banks who are selling these vehicles usually wouldn’t allow for test drives, or even opening up its hood. Well that's understandable because repossessed cars are often stored like this

So what’s a repossessed car buyer to do? Well despite those limitations, there are some things you can do to ensure that you’re not buying a possible lemon, and you’re not getting ripped off. Without further ado, here’s a checklist that you can refer to when buying a repossessed car.

Despite car ownership at an all-time high, we’re pretty sure that most of us aren’t master mechanics. Sure, some of us might have some knowledge, but then again, we do have our limitations.

To address this part, we recommend bringing along a trusted mechanic when viewing repossessed cars. This is especially helpful when buying a repossessed car at auctions because some mechanics can actually tell what’s wrong with a car by just looking at its stance, hearing its engine, and the color and thickness of exhaust smoke.

Now for some of you who are indeed mechanically inclined, then an extra set of eyes is pretty useful, plus a second opinion will always do you a lot of good.

>>> Related: What to ask your mechanic so you can save more money?

2. Check under the car for leaks

As we’ve established in previous articles, many banks selling repossessed cars won’t allow you to take a peek under the hood. But guess what, they can’t stop you from looking at the ground under the car can they? Most often than not, entities selling repoed cars won't allow you to open a car's hood

By doing that just, you can check if a car has been leaking fluids. Also, if you’re an experienced car owner, you can detect which fluid it’s leaking by taking a whiff. Leaking oil, brake fluid, and transmission fluid, are of course signs that the repoed car you’re inspecting might not be in the best condition.

Do note though that if it's water, there might be a chance that it’s nothing to worry about. As such, take note of where the fluids under the car you’re inspecting might be coming from. This is especially true for repossessed cars here in the Philippines because they’re usually parked tight close to each other, and are stored in large dusty warehouses.

3. Visually check the tires and under chassis components

Again, banks won’t allow you to test drive the repoed car, nor will they allow you to jack it up. So to tell if there’s anything wrong with suspension components, you can simply take a look at the said car’s stance. Is it sagging? Is it leaning towards a particular side? Barring a flat tire, that might be a sign that something’s wrong with its suspension, particularly the shocks.

Do note however that some warehouses where these repossessed cars are stored will sometimes have uneven surfaces. Some don’t even have cemented floors at all. Do note that some storage lots for repoed cars are uneven. [Source: The Ultimate Car Guide]

To make it more thorough, you can kneel down, and take a peek under the car. If they allow you to, you can even tug the suspension parts to check their structural integrity.

Apart from the suspension components, you can also check for rust, dents, and other signs of damage inside the wheel wells, the wheels, and on other parts of the underchassis. While you’re at it, take a good look at the oil pan, if it isn’t obscured by a plastic cover. Does it look wet? Does it have dents? If you answered yes to those, then the car might have a problem. 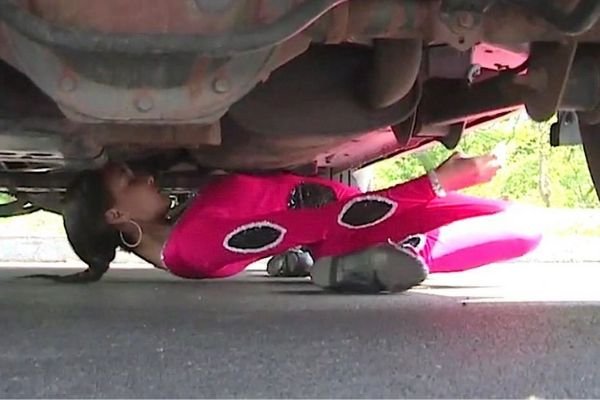 If you can do the limbo under the car then why not?

For the tires, perform a visual inspection first. Take note of how shallow or deep the treads are. If you want, you can even determine the age of the tire by taking note of its manufacturing date, which typically comes last on the DOT code. It comes in a four digit form, with the first two numbers denoting the week number, and the last two the year.

Note however that tires can be easily replaced, but then again, if extra costs can be avoided, then why not make sure, right?

>>> Related: Do you know this clever trick using a P1 coin to check your car’s tread depth?

4. Visually check the condition of the paint and other exterior parts

We’ve said before that repossessed cars are not in the best exterior condition. This is especially true for units that were stored in a warehouse for more than a month or more. As such, do check for scratches on the car’s paint, cracks on the windows, the condition of the car’s rubber window and roof seals, as well as the condition of the headlights and taillights. Some repossessed cars will be pristine, some will look like this [Source: The Ultimate Car Guide]

Also, check the car’s “holes” if it has any. We’re talking about air intakes, vents, as well as the exhaust. Do this with a small flashlight because more often than not, critters will have made their nests inside these parts. Sure, this might be an easy fix, but it sure can be annoying.

5. You can’t open a repoed car but you can peek through the glass

For repossessed cars, you can’t check it’s interior if you haven’t bought it yet. You can of course circumvent this by simply taking a peek through the car’s windows. If you plan on doing this, take note of the condition of the dashboard, and the condition of the seat covers.

6. Consider your finances and the price of the car

As we’ve said before, getting a financing approval from the bank that’s selling the repossessed car might be easier than the usual financing process. But then again, we highly encourage you to check the actual market value of the car that you’re planning to buy.

There are many resources on the internet for this, but we recommend using our Car for sale section as a reference. Take note of the car’s make and model year, and then compare it with five to ten similar listings.

With any purchase though, you should always consider your finances first. When it comes to repossessed cars, which we now know to be a mixed bag, do note that even if you performed the checklist above, it still might have some hidden problems that even the seller wasn’t aware of. As such, you should always consider the cost of acquiring the repo car, as well as your ability to spend money on things that you need to get fixed.

And lastly, you can always ask to take a peek at the car’s service records. If it has some gaps on its periodic maintenance schedules, that’s a bad sign. If there are no records at all, you might as well choose another vehicle to purchase. 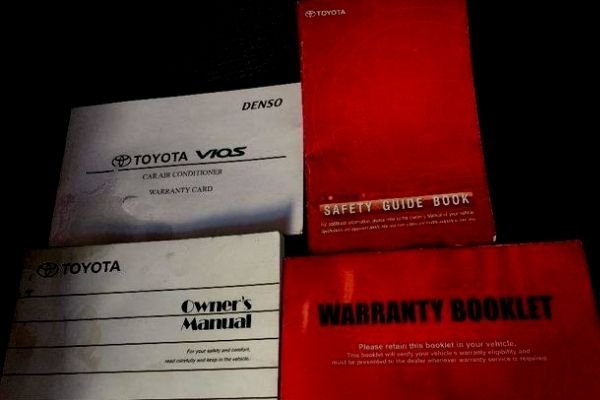 Records are good, but do note that most repossessed cars will have missed their last maintenance interval

Before clicking away from this article to go buy a repossessed car, do note that some car manufacturers here in the Philippines also have their own pool of used cars. One should also consider this as an option because these are usually “certified pre-owned” vehicles. Meaning that the manufacturer will have inspected these thoroughly to make sure of their road worthiness, and some will even come with a warranty.

Going back to the repossessed car buyer’s checklist, you may have noticed that it is vastly different from our used car buyer’s checklist. Why? Well as we’ve said again and again, entities selling repossessed cars won’t allow for test drives, opening the hood, and entering the car. As such, we encourage you to prepare to get dirty when inspecting repoed cars. Wear your toughest jeans, and prepare your knees for a lot of kneeling down. Also, eye protection will help a lot because of all that peeking that you’ll be doing.

If you’re that bent on buying a repossessed car, then please follow the checklist above, and do your research. For more car buying guides, keep reading here on Philkotse.com.