Are you a fan of old school cars?

For some reason, the term ‘old school’ is actually quite common in the auto scene. Well, maybe because it is also used in other industries such as clothing and fashion as well as technology.

If this definition is to be followed, then we would have a hard time defining what an old school car is as the first driver’s assistance systems were used for as long as 50 years ago. This already contradicts the definition of those who say that old school cars are those manufactured 20 years ago or more.

We can go on for hours if we say one by one the different definitions shared by different car enthusiasts around the world. As said earlier, let’s just say that the term is complex and subjective. But as for the rest of this writing, we will follow those people who claim that old school cars in the Philippines are 20 years or more.

II. Top old school cars for sale in the Philippines for your reference

One can never go wrong with the Toyota Corolla. The first-generation Corolla was introduced in 1966 that sports one true vintage look. However, the most common old school Corollas in the Philippines are those from the sedan’s sixth-generation and the seventh-generation. These Corollas are commonly known as the Small Body (sixth-gen) and Big Body (seventh-gen). Sporty and classy, these are the characteristics of the old school 90s Mitsubishi Lancer for many Filipino car owners. It is so loved by Filipinos that they start calling the Lancer with different names, namely Lancer Itlog, Lancer Singkit, and Box Type. Spotting a 90s Mitsubishi Lancer is still actually quite common in today’s time. It is also still being sold with a price that ranges from Php 70,000 to Php 180,000, depending on the condition and year. The Mitsubishi Lancer will always be an instant classic in the eyes of many Filipinos.

>>> Related: What is a muscle car? Can I buy one in the Philippines?

Another Mitsubishi vehicle off this list is the Mitsubishi Galant. The 90s Galant and the 90s Lancer share similarities as both were once classified as the compact sedan of the Japanese marque. However, some say that the Galant brings more sporty visuals as compared to the Lancer. The Mitsubishi Galant was discontinued as well

The most common old school Mitsubishi Galant that you will still see on the streets is the sixth-generation, which was introduced in 1987 and was ended in 1994.

Just like the Lancer, the Galant will also remain as other instant classic thanks to its classy characteristic that helped it become one of the most favorite project cars until this day.

If you heard of the narrative from Filipinos that Nissan makes great air conditioners in its cars, then the old school old school Nissan Sentra is one of the cars that helped build that reputation. Both the second and third-generation Sentra was loved by many Filipinos. The Nissan Sentra B13

The old school Nissan Sentra was manufactured here in Santa Rosa, Laguna so it didn’t have a hard time establishing itself in the 90s. It is still offered as a used car for Php 70,000 to Php 130,000, depending on the condition and year.

The 90s Mitsubishi L300 Van is probably something your parents have used in their road trips during their younger days. Some even still use it in today’s time for family day trips, while some use the L300 for school service. Needless to say, the L300 has come a long way in the eyes of many Filipinos. 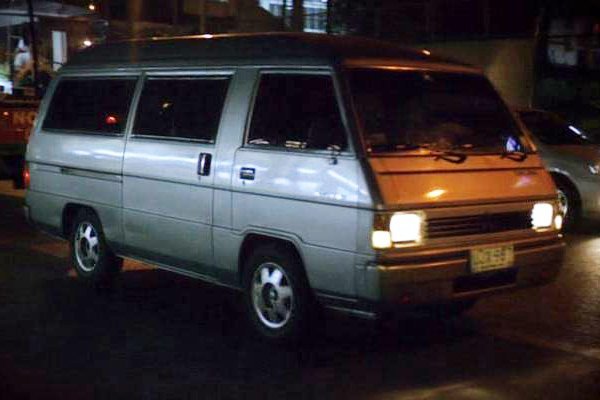 The ultimate 'barkada' vehicle back in the day

III. Should you consider buying old school cars in the Philippines?

To give you a deal-breaker, old school cars in the Philippines are not the easiest to maintain despite the great legacy it left behind. Most old school cars, which are 20 years old or more, have registered around 180,000 kilometers already.

On average, the ideal mileage before replacing a car is 110,000 kilometers. Beyond this mileage, the car is expected to show minor problems and component failures. This is exactly the reason why people tend to buy new cars rather than a cheaper used car.

The repair and maintenance costs will probably cost the same as paying for the down payment of a new car. But, this is not always the case as some high milage used cars are well maintained.

>>> Related: 6 common elements to consider when reviving an old car

Q: What is an old school car?

Q: What should be the mileage when buying a used car?

The ideal mileage when buying a used car is 30,000 to 50,000 km. Used cars with 100,000 km mileage could start to have component failures. But, this is not always the case as some high milage used cars are well maintained.

Q: What is the most common old school car in the Philippines?

There are different old school cars that Filipinos will always remember. These include the Toyota Corolla, Mitsubishi Galant, and Mitsubishi Lancer, among others.

Q: How much is an old school car in the Philippines?

Due to its high mileage, old school cars tend to have a cheap selling price. You can get an old school car in the Philippines for Php 100,000 only.

Q: What is the difference between old school cars and vintage cars?

The Mitsubishi Galant is a mid-size, four-door sedan enjoyed for nine generations. Mitsubishi Motors initially launched it as a compact vehicle but after several facelifts and internal updates, it was offered as a mid-size automobile. During its active years, it is one of the Japanese carmaker’s highly-demanded models selling over 5 million units. It features a subtly-designed and timeless exterior detailed with fine lines and curves. Inside, it offers a roomy exterior equipped with safety and comfort amenities the driver and passengers will adore. The Mitsubishi Galant comes in two trims: the Mitsubishi Galant ES and the Mitsubishi Galant SE. It is offered in Rave Red, Quick Silver, White Pearl, and Kalapana Black.