It’s a choice between fuel efficiency or performance.

What is a 4-Cylinder Engine?

As the name suggests, a car with this type of engine is powered by four cylinders. What cylinders do is they house the combustion that pushes the pistons down required for engine cranking. The pistons go up again as the other pistons rotate the crankpin.

There are three cylinder layouts for 4-cylinder engines, namely the V4, inline-four (also known as straight four), and flat-four (better known as boxer engines). The most common layout used in today’s cars is the inline-four engine due to the ideal balance it offers especially when cracking. 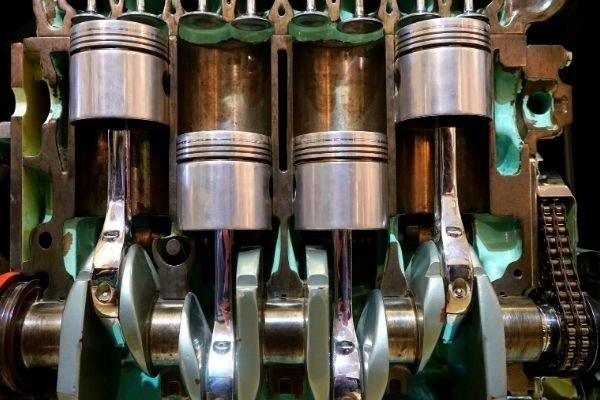 Cut-away of an inline-four engine

Flat-four engines are commonly found on production cars by Subaru and Porsche. The reason why these engines are called boxer engines is the way the pistons ride up and down the cylinder. The pistons look like they are executing a straight jab.

V4 engines, however, are rare to find these days. This type of engine is expensive as it requires two cylinder heads and two exhaust manifolds to operate. You would find V4 engines more on motorcycles than automobiles due to their shorter length.

>>> Related: 6 steps to increase the power of four-cylinder car

What is a 6-Cylinder Engine?

On the contrary, this type of engine uses six cylinders to power the engine. Theoretically, the more cylinders your engine has the more power it makes. This is why people see cars with a 6-cylinder engine as a more performance-oriented power unit. Just like the 4-cylinder engine, 6-cylinder engines also have the same types of cylinder layouts. However, the more common layout used by engines with six cylinders by today’s production vehicles is in V configuration.

4 cylinder vs 6 cylinder: Pros and cons

Let’s start off with the deciding factor when buying a car, the cost. Since 6-cylinder engines come with more parts such as two more cylinders, which means that the final production cost will also increase as compared to those models that use 4 cylinders only.

Take the Jeep Wrangler for example. Jeep Philippines offers the Wrangler with two variants, namely the Sport and Rubicon. The Sport variant is powered by a 2.0 in-line four engine, while the Rubicon variant can be equipped with a larger 3.6-liter V6 engine.

As for pricing, the Sport variant is offered at Php 3,390,000, while the Rubicon variant comes with a price of Php 4,090,000. That’s like a Php 700,000 price difference for the same model with different amounts of cylinders to it. A boxer engine from Subaru

Generally, the more cylinders installed, the more the asking price. This is the reason why supercars tend to be sold at higher price points. Some supercars are even equipped with cylinders up to 12 such as the Lamborghini Aventador, Ferrari LaFerrari, and McLaren F1.

Aside from the cost of buying them, 6-cylinder engines are also more expensive to maintain as compared to 4-cylinder engines. Engines with six cylinders are installed with more parts that need to be replaced after reaching a certain mileage.

Perhaps the most common component that is frequently replaced is the spark plug. This component is essential in completing the combustion in a cylinder. If your car has six cylinders, then it comes with six spark plugs. The same concept works on engines with four cylinders.

As said earlier, cars with a 6-cylinder engine are viewed more as a performance option. As such, 6-cylinder engines theoretically offer more power cars fitted with a 4-cylinder engine. More cylinders mean that an engine can burn more fuel/air mixture in a single crankshaft rotation. One of the favorites is the VTEC engine developed by Honda For this reason, cars such as the Toyota Wigo are usually equipped with economical engines. The Toyota Wigo is fitted with a 3-cylinder engine good for 66 hp and 89 Nm of torque. Despite producing less power, the Wigo remains one of the best-selling vehicles in the country due to its great fuel consumption rating.

If you are in the market for a car you can use for your daily drive to work or school, you can go for a car with four cylinders. It will help you save money on maintenance and fuel. But if you need a little boost on the go, you can always opt for a car with six cylinders. Just be ready for the costs this type of engine will need for operation.

Q: Is a car with a 4-cylinder engine better as a daily drive?

Yes, cars with a 4-cylinder engine are known to be more fuel-efficient which makes them an ideal daily drive.

Q: What car comes with the most number of cylinders?

Theoretically, cars with six cylinders are more powerful than cars with four cylinders as they can burn more fuel per crankshaft rotation.

Q: Which one is better, a 4-cylinder or 6-cylinder engine?

The answer depends on your needs. 4-cylinder engines are usually better in fuel economy, while 6-cylinders are usually more powerful.