Which 2021 Toyota Corolla Cross variant should you buy?

Spoiler alert: the lower-priced one has more power.

Crossovers are hot in the Philippine market right now. These cars are slowly catching up to the locally popular sedan, and so it is highly likely that many customers are considering these as their next vehicle. To this end, Toyota Motor Philippines decided to dip their toes in the said market segment by introducing the Corolla Cross back in 2020. Currently, the Corolla Cross has two variants available in the Philippines. So, which is the right one for a prospective buyer? Let’s talk about that.

At first glance, the Corolla Cross G and the Corolla Cross Hybrid V aren’t that different from each other. Both come in the typical compact crossover form, albeit sporting an angry-looking front fascia. Both also bear the black plastic cladding that’s all the rage with modern crossover models. The black cladding extends to its rear end

If you look at them closer though, one can see that the hybrid variant comes with blue-tinged Toyota badges. The non-hybrid variant, on the other hand, has the regular Toyota badging. LED headlamps are also standard on the hybrid, as well as a metallic front grille. In contrast, the regular G variant comes with halogen projector headlamps and a black front grille. Moreover, the top-spec hybrid variant also has rain-sensing wipers, whereas the non-hybrid G has regular wipers.

Those differences aside, both Corolla Cross variants in the Philippine market share standard elements such as LED taillights, LED front fog lamps, and LED daytime running lights. Both also have power adjustable and auto-folding side mirrors. For the driver, both variants provide keyless entry, and a push-to-start button. The top-spec variant, however, has an eight-way power adjustable driver’s seat, while the lower-spec trim is equipped with a six-way manually adjustable driver’s seat. Apart from that, the Hybrid V variant also gets a seven-inch digital gauge cluster, while the entry-level variant only has an analog-digital gauge cluster. 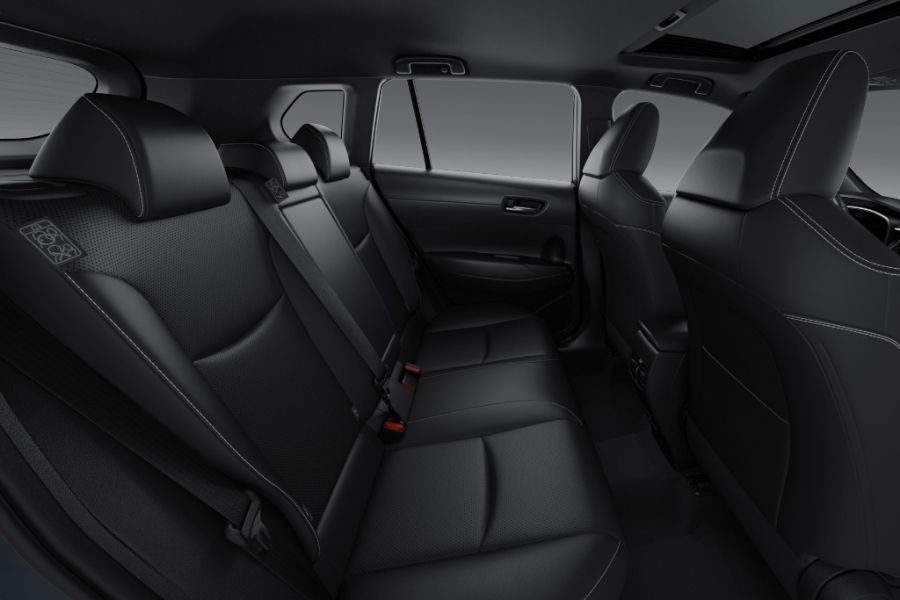 It's rear seats offer plenty of leg and headroom

For entertainment, the top-spec model also gets a better system. To be specific, it comes with an 8-inch touchscreen, while the lower-spec variant comes with a smaller 6.8-inch touchscreen. However, both head units come with Bluetooth and the Smart Device Link software. The larger unit however, has Apple CarPlay and Android Auto.

When it comes to what’s under the hood, this is probably the biggest difference between the Corolla Cross’ two variants.

For the top-spec V, it uses a hybrid system consisting of the 1.8-liter 2ZR-FXE inline-4 gasoline mill, and a motor generator. In total, this powertrain can produce up to 120 horsepower and 142 Nm of torque. 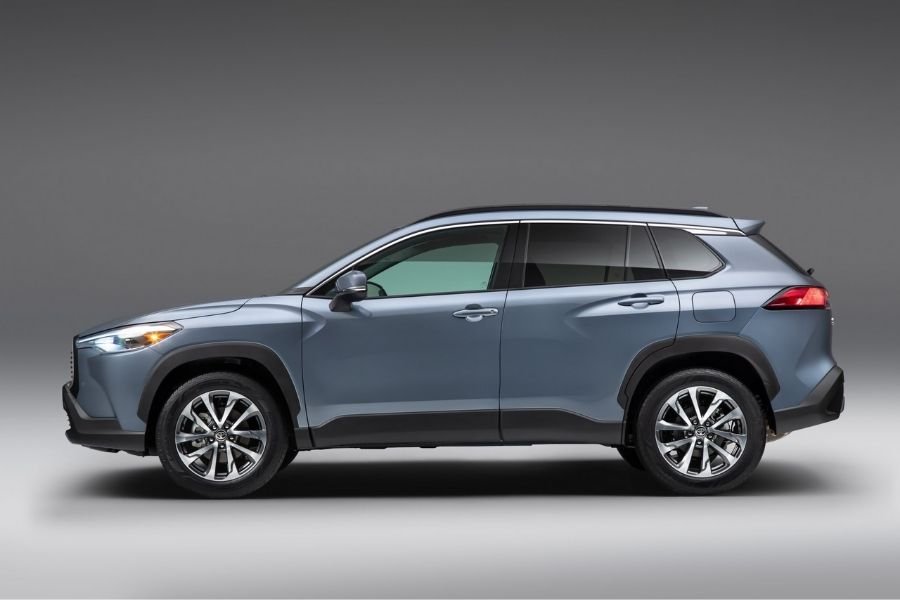 The Corolla Cross from the side

In contrast to the V variant, the lower-spec G is a gas-only vehicle. It uses the 1.8-liter 2ZR-FE inline-4 gasoline engine, which can produce up to 140 horsepower and 172 Nm of torque. The combustion-only powertrain is obviously a bit more powerful than the Corolla Cross V’s hybrid powertrain.

For transmissions, both variants come standard with a continuously variable transmission (CVT). The said transmission then sends power to their front wheels. Both variants also use a MacPherson strut front and torsion beam rear suspension. Both also have ventilated front and solid rear disc brakes.

While the lower-spec Corolla Cross G lacks TSS, it does share the same standard safety equipment with the top-spec model. Both come with seven airbags, anti-lock braking with electronic brake-force distribution, stability and traction control, ISOFIX child seat tethers, a reverse camera, an engine immobilizer, and a car alarm.

If we’re talking about on-board features and safety kits, the difference between the Corolla Cross G and V are clear-cut. In other words, the more expensive variant simply gets more. Specifically, it has more in the way of safety with its TSS, and it also has a better entertainment system.

Then again, the more affordable Corolla Cross G makes more power and torque. It is highly probable however, that it has a larger carbon footprint than the hybrid variant.

To sum it up, anyone who’s concerned with having more safety and being more environmentally conscious at the same time should lean towards the Corolla Cross Hybrid V. In turn, those who want more power should go for the Corolla Cross G. Do note though that this is just a suggestion, and we urge you to test drive both variants if you’re hell-bent on getting a Corolla Cross.