Only in The Philippines: 5 Public Utility Vehicles That Are Uniquely Pinoy

Let's get to know 5 public utility vehicles that are solely ours!

I think every Filipino has had their own fair share of commuting through public utility vehicles in and around the metro. Sometimes, in fact, it’s more convenient to ride the public transport as you will have chances to reach your destination faster – this is because some of them are smaller than four wheeled vehicles such as the infamous jeepneys and buses.

Have you ever wondered how people commute in other countries? What could be their mode of public transportation? Are they all riding cars or SUVs? Do they have the same vehicles as ours in the Philippines?

I can only share some from the trips we’ve made around Asia. For one, Hanoi Vietnam’s main mode of transport is motorcycle – even teenage students use their bikes/scooters to and from school. If you’ll observe the streets, you’ll notice that 80% are composed of motorcycles, 15% are buses and the remaining 5% are cars or taxi.

In Singapore, on the other hand, people utilize their efficient and always on time MRT and buses while in Cambodia, they mostly use their infamous “tuk-tuk”, similar to our tricycle, only bigger. These transportations are fairly common among countries. Well, we can take pride in ourselves because there are 5 public utility vehicles that can only be found in the Philippines!

Let’s look at the following PUVs and Philkotse.com believes that we can proudly say, uniquely ours.

Who doesn’t know jeepneys? Jeepneys or “Jeep” as we fondly call it has been a staple means of transportation of every Filipino in the Philippines. 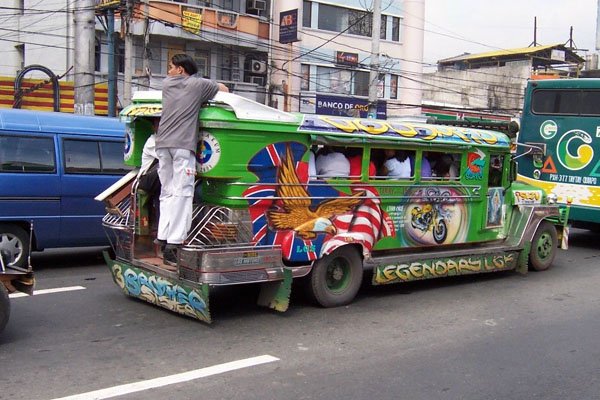 When you get out of the house, chances are there are already jeepneys passing by, if not, you just have to walk for 5 minutes and there’ll be a jeepney waiting for you to board them. They are everywhere, and their routes are pretty much unlimited. They can take you from point A to point B in just a cheap price.

For those of you who don’t know, Jeepneys came from the military Jeeps that the Americans have left behind after World War 2, which were so many that these were either sold or just freely given to Filipinos during that time.

Knowing Filipinos’ resourcefulness, they have revamped these Jeeps and added roofs for shade and have remodeled the back part by adding two long benches on both sides so more people could sit facing each other.

Filipinos have turned these supposed vehicle remnants into something that could produce financial help for them and their families. World War 2 Jeep was the inspiration behind the modernday jeepneys

Jeepneys have evolved throughout the years and have come with different looks – some have really loud decorations and sounds and some just looks plain and simple stainless steel. Whatever look these Jeepneys have, they sure are very helpful in the everyday lives of Filipino commuters.

Another mode of transport that also has fixed routes is multi-cabs. And for that Purpose, Philkotse has plenty of options to choose from, like Suzuki Multi-Cab 2020 for example.

For me, this is the 2nd most famous uniquely Pinoy public utility vehicle. This also one great way to showcase Filipino creativity and innovation – imagine, a 2-wheeled motorcycle then attached it to a “side car” and add an extra wheel and roof to make it a 5-seater ride and earn money from it. How ingenious, right?

A bit of history, it is said that tricycle is born out of inspiration from a rickshaw, a very old mode of transportation where a person pulls a two wheel carriage from point A to point B. So in the modern world, they replaced the human with a motorized two wheel vehicle like the motorcycle for better and more efficient way of transporting passengers. Tricycles are smaller than Jeepneys so you will find them even in the smallest and skinniest roads and even inside a subdivision. As a commuter, you will have the convenience of just walking outside your door and hail a tricycle passing by to take you to your destination.

Thing here is if you make friends with your regular taxi driver, you won’t even have to make an effort to wait by your doorstep and hail a tricycle. All you have to do is call or send him a text message so he can fetch you whenever and wherever you need.

Pedicab is the predecessor of tricycle. It’s the same look, only that it is not motorized. It is also known as “traysikad”, “sikad” or “padyak”, which means to pedal using feet. Pedicab is composed of a bicycle, attached to a side car covered in “trapal” or tarpaulin. Since this vehicle is only designed to travel short distances, the fare is much lower compared to tricycles and jeepneys.

This surely is the most amazing public utility vehicle you’ll ever see in the Philippines. If you think a motorcycle can only fit two or three people, including the driver – think again! You will never comprehend what a Filipino mind could think of. So they made habal-habal.

In the simplest form, it is a public utility vehicle in the form of motorcycle with one or two people on the backseat. The next form is an extended backseat that can fit up to 5 people including the driver, who moves forward to the gas tank so he can accommodate the passengers and control the balance. The best and most extreme form of habal-habal is when it already sports a wooden plank that is attached perpendicularly to the back seat to make room for more people to sit in. And guess how many people can ride in this type of habal-habal? 13! Yes, 13, plus their baggage.

Take note in one motorcycle. You can only imagine.

When I think of kalesa, the things that come in mind are the old days when Jose Rizal was still alive and people were still dressed in flamboyant and seemingly heavily set Filipiniana outfit.  It is such a glamorous ride back in the days when Spaniards have colonized the Philippines and it looks similar to Cinderella’s coach that took her to the ball. It is a carriage pulled by a horse. The kalesa can also sit several people too. Although not being used anymore, you would still find some of these in tourist spots like Intramuros.

Well, it can be said that living in the Philippines, traffic comes as a nightmare for many Filipinos, especially those who're residing in big cities like Metro Manila. Using these public utility vehicles is not a bad idea to reduce traffic congestion in these cities.

Don't forget to visit Philkotse.com everyday to get more useful tips to survive while driving in the Philippines.