Updated Oct 07, 2020 | Same topic: Let's Drive Smart!
Car fires will destroy your property and can even threaten your life. To know the most common causes and safety measures to avoid car fires, keep reading.

Have you ever driven past a car that has burst into flames? Or heard in the news about a late-model car spontaneously combusting? As a car owner, you might be worried that it might also happen to you. Car fires might not exactly be a regular occurrence, but they do happen.

Fortunately, they’re also avoidable. This Philkotse.com article highlights the most common causes of car fires which will help you take steps to avoid them, keeping your car from going up in smoke.

One leading cause of car fires is a fuel system leak, resulting from punctured or corroded fuel lines. Needless to say, leaks in this part of the car are very dangerous.

Your machine uses a variety of fluids that are toxic as well as corrosive, and in the case of gasoline, highly flammable; all it takes is a spark near the leaking fuel line, and you’ll practically have a barbecue on wheels. Observe a proper maintenance regimen, paying extra attention to the state of your fuel lines. If you notice a lingering gasoline smell inside or around your vehicle, have the source of the odor promptly checked and fixed.

>>> Read more: 7 fuel pump problems that tell you it's time for a replacement.

Problems with the electrical system also contribute to car fires. Let’s start with the battery, where the charging cycles can result in hydrogen gas building up inside the engine bay. Typically, a car battery would simply die from overcharging, but in certain instances, the sulfuric acid and distilled water mix inside will boil.

The resulting hydrogen will cause the casing to either melt or expand, and one electrical spark from loose or faulty wiring can set off an explosion.

But the hazards of the electrical system are not limited to just the engine bay. Various wires and cables run throughout the entire vehicle: under the carpet, along with doors, through heated seats, and many more. Problems with the electrical system also contribute to car fires

Over time, these wires can have their insulation stripped, either through wear, water damage or pests, and one spark traveling from a frayed wire onto combustible material such as the carpet can cause a fire.

Improper aftermarket installations involving electrical equipment can also result in a fire. With this in mind, make it a habit to regularly check your car’s electric wirings.

As we mentioned earlier, a single-car uses a variety of fluids; aside from fuel, you also have the transmission fluid, engine oil, brake fluid, power steering fluid, and even engine coolant.

Believe it or not, each of these fluids presents a potential a fire hazard even as they circulate while the car is running, with damaged hoses and reservoirs being especially problematic. Watch out for unusual puddles forming underneath the car, indicating that some of these fluids might be leaking out.

Leaking or spilled fluid under a vehicle could lead to fire

An overheating engine is another cause of car fires, illustrating how one thing can lead to another. The car’s engine burns fuel at a controlled rate of combustion, which is why the engine temperature has to be regulated. In cases where the engine’s cooling system fails, it doesn’t take long for the engine to grow hotter, leading to overheating.

Considering the presence of volatile fluids that help make it run, an overheating engine will stall at best, and burst into flames at worst. The increased temperatures can also cause fluid to spill out of circulation and land on the equally hot exhaust system, where they can easily ignite and spread.

An overheating engine could lead to the car combusting

One solution is to remap the car's ECU to set a lower engine temperature threshold. But generally, all it takes is a scan of the cooling system. Make sure that the radiator is intact and has enough coolant, the radiator fan is working, and there are no faulty seals or gaskets.

>>> Grasp your attention: Causes and remedies for overheating automobile engines.

Physical impacts also play a role in causing car fires, especially in frontal crashes. While the crumple zones on most cars are designed to absorb the energy of a particularly strong crash, the impact can still be strong enough to send fluids spilling everywhere inside the engine bay, where they are exposed to heat and smoke.

Owing to the confusion and disorientation immediately after a crash, occupants will have a hard time identifying the extent of the damage, making them vulnerable to the threat of fires.

A crash can actually spark a car fire, depending on what part of the car was hit

The worst thing that can happen is getting caught up in a blaze while inside the car, so the best way to ensure your safety is to promptly exit the car once the doors can still be opened and if there are no discernible bodily injuries.

To reiterate the point, being negligent about car maintenance virtually guarantees disaster on the road, which includes car fires. If you don’t take the time to inspect everything that needs to be looked at, especially when signs of trouble emerge, then don’t be surprised if something unfortunate happens. 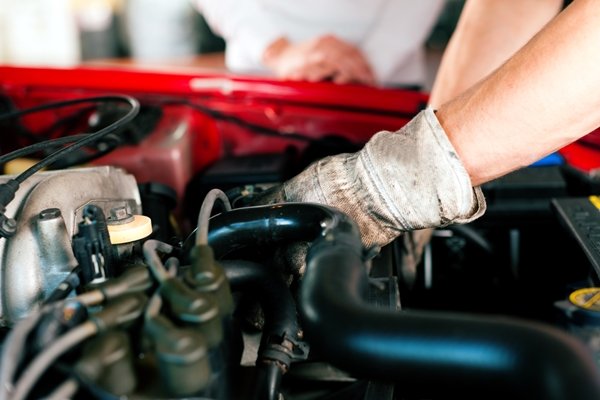 Being negligent about car maintenance virtually guarantees disaster on the road, which includes car fires

Set aside a day or two to have your car checked by a professional mechanic, just to make sure everything is in good working order. If anything needs fixing or replacing, have them done without delay. Remember that every time you drive your car, it isn’t just your life on the line, but those of others as well.