Toyota changes the games with the launch of the Toyota Corolla Altis 2020. With competitive pricing does it have what it takes to sway buyers towards the future?

With 12 generations under its belt, the Toyota Corolla is the most recognizable nameplate in automotive history. In the Philippines, the Corolla name is synonymous with quality craftsmanship at an attractive value point.

Just yesterday, Toyota Motors Philippines unveiled the latest generation of the Toyota Corolla Altis and has something revolutionary in tow, a 1.8 liter Atkinson cycle hybrid engine, the very same one that powers the iconic Toyota Prius. The Corolla name is synonymous with quality craftsmanship

Before you balk at the thought of an expensive Corolla let me be the first to burst that bubble. In a surprising turn of events, Toyota launches the 2020 Toyota Corolla Altis Hybrid in the Philippines for Php 1,580,000, effectively undercutting its bitter rival the Honda Civic RS. The Corolla Altis undercuts its rivals in the compact market

The Toyota Corolla Hybrid features a 1.8-liter Atkinson-cycle motor, which in itself makes for efficient driving and makes 95 hp and 142 Nm of torque, but this is in turn paired to a powerful electric motor giving in an effective power rating of 120hp. A speed demon this is not, but that has never been the point of Hybrid Technology.

There haven’t been any official tests done in the Philippine setting, but considering that the much heavier Toyota Prius makes 22km/l, things look promising for the sedan. You can switch between drive modes on the fly and even go to pure EV mode if you do so choose. 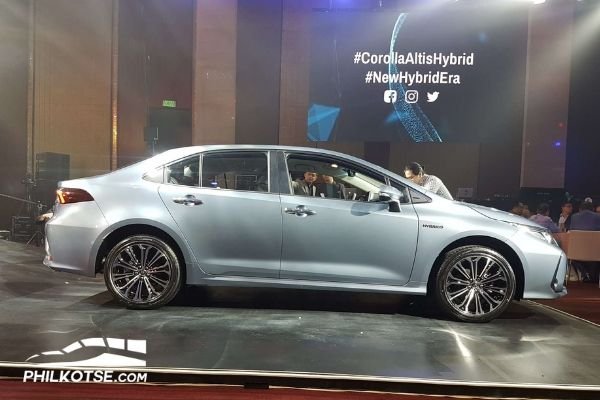 Considering that the much heavier Toyota Prius makes 22km/l, things look promising for the Corolla Altis

Toyota prides itself in the engineering of the all-new Toyota Corolla Altis 2020. They claim to have lowered the driver ride height as well as the engine to lower the center of gravity making the car more handle better around corners. They’ve given the car a 60% increase in rigidity as well to aide in handling and stability.

The overall design of the 2020 Toyota Corolla Altis has been overhauled as well to provide a much sportier look than its predecessor. Toyota says that its main purpose is to provide maximum enjoyment with its attractive design and fun to drive characteristics. This is a carryover from the previous generation but for anyone who knows of the characteristics of the 11th generation Corolla, it is a peppy, reliable engine. It can be had in, 3 variants, the E, G and V models with a 6-speed Manual Transmission option for the E and G models, while Toyota’s CVT comes standard in the V.

>>> Get the best deals of Toyota Corolla Altis with lowest prices The belle of the ball, however, is Toyota’s iconic 2ZR-FXE hybrid engine that mates a 1.8 liter and a 100kW electric motor. Together this imbues the Corolla Hybrid with a maximum power of 121 hp. Hybrid Technology works with either alternating power sources or combining both for maximum performance.

This method nets the current-generation Prius, a much heavier car with an amazing 22 km/l, further tests are still in for the Corolla Altis but we believe it can do so much better than the Prius. The Toyota Corolla Altis Hybrid is only available with a CVT to further improve fuel economy. The 1.8-liter Hybrid engine makes a maximum capacity of 121 hp

I can go on and tell you the other features of the car such as safety, creature comforts and all but what makes the current generation so special is how much Toyota is ready to battle other cars in the market with their competitive pricing.

>>> Find your nearest Toyota dealerships and get your Corolla Altis right now!

The all-new Toyota Corolla Altis Philippines will soon be released in stores and available in 6 amazing colors. Keep your eyes glued to Philkotse.com for more news and updates, and contact our certified dealers for more information on how you can get your all-new 2020 Toyota Corolla Altis Hybrid!