The 2017 Aston Martin Vanquish S has arrived in the Philippines

First, at the heart of the Vanquish S is a naturally aspirated 6.0-liter V12 engine that delivers an output of a dizzying 580hp and can reach a maximum speed of 323kph. The engine is equipped with an eight-speed Touchtronic III transmission. With that combination, the car is able to sprint from 0 to 100km/h in just 3.5 seconds, which is respectable. 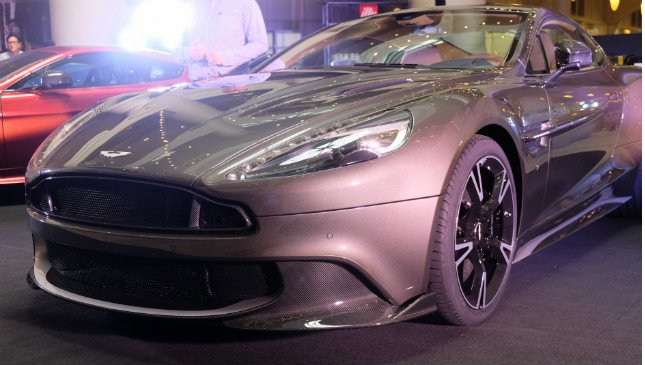 At the heart of the Vanquish S is a naturally aspirated 6.0-liter V12 engine
Concerning its appearance, the Vanquish S flaunts a lightweight body made of carbon fiber materials. Perhaps Aston Martin made sure to set the car apart from the regular version by fitting it with a carbon fiber front splitter and rear diffuser, which also help to improve high-speed stability. This gave the car a unique look.

Further differentiating the Vanquish S from the standard model is a set of sleek quad-exhaust pipes. Inside, this luxury car is a comfortable pair of leather seats. As for onboard entertainment, owners can enjoy its Bang & Olufsen audio system and satellite navigation. This luxury car is a comfortable pair of leather seats
>>> View more:  The Aurelio super sports car making a historic breakthrough
Aston Martin Manila president and chairman Marc Tagle as quoted as saying “I am pleased to officially introduce the new Vanquish S, and we very much look forward to see the new flagship Aston Martin being driven on the streets of Manila.”

Along with the Aston Martin Vanquish S launching is an announcement from the British brand that local deliveries for the car have now begun.