Audi A7 2019 premieres with new excellent design and more tech

The all-new Audi A7 2019 goes beyond expectation of car lovers.

Finally, the second-gen Audi A7 2019 is here. Its debut, frankly, has been more impressive than expected.

The A7 shape is the same as teased but Audi has now brought the all-new A7 a more sophisticated and stylish design with more lines and sharper edges.

>>> For those who missed teaser of the Audi A7, click here to read our article and get more information

Compared to the Audi A8, the new A7 is equipped with a larger and lower Singleframe grille. The A7 front fascia is also decorated with Audi laser HD Matrix LED headlights. Its length is 196.6 inches, 0.6 inches longer than the previous model. Meanwhile, with a height of 55.9 inches, the newly-launched sedan is lower than the original but still remains a low slung appearance. Speaking of the rear, the Audi A7 2019 is highlighted by 13 separate strips of LEDs, creating striking taillights. Particularly, there is a retractable rear spoiler that will automatically raise when the vehicle hits over 75mph. Further, the European-spec will be defined by the 55 TFSI badging, but the carmaker informs that the US version will not be badged. 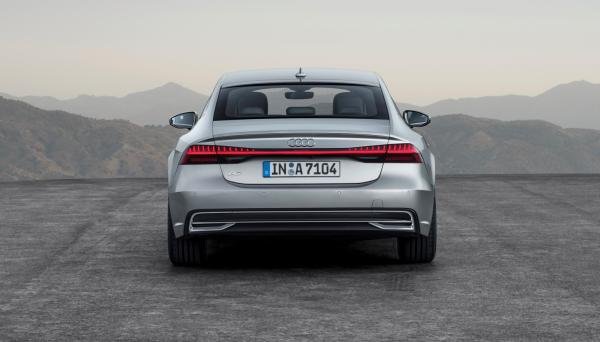 The new A7 is highlighted by 13 separate strips of LEDs, creating striking taillights

The Audi A7 interior looks airy with a number of horizontal lines. Audi says that the all-new model’s interior features 4 main values including sophistication, progressiveness, intuitiveness and sportiness.

Accordingly, the A7 impresses car lovers with its outstanding equipment, for example, a 10.1-inch upper display at the center and an 8.6-inch touchscreen to serve functions for driving. In addition, the sedan is also adorned with a 12.3-inch Virtual Cockpit instrument cluster for drivers, massaging seats, a panoramic sunroof and also a Bang & Olufsen audio system. 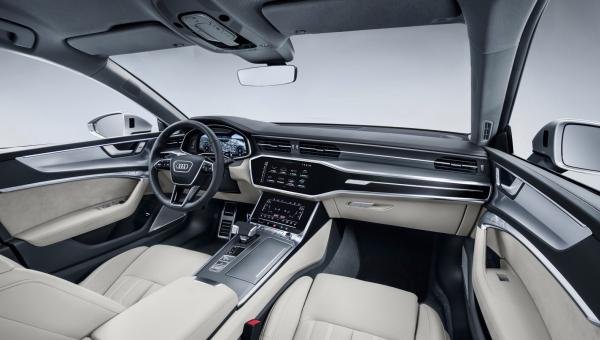 The A7 impresses car lovers with its outstanding equipment

A new dominant feature in the 2019 A7 is that it can park automatically even when the driver is not inside, this feature was also applied for its predecessor - the Audi AI. The second-gen Audi A7 will run a turbocharged 3.0L V6 engine, which is capable of cranking out 340 hp and 500 Nm of torque, along with a mild-hybrid 48-volt system, allowing it to whir from 0-100km/h in a neck-snapping 5.3 seconds. The second-gen Audi A7 will run a turbocharged 3.0L V6 engine

According to latest car news, the Audi A7 2019 will offically be available for sale in February 2018 and it should walk in the U.S. later in 2018 or at the beginning of 2019. Can't wait for the sedan to hit our shores!