The new Kia Telluride to put on a concept-similar look

The new Kia Telluride is expected to stand out when put among lesser Sorentos with ample bespoke styling tweaks.

At the 2016 Detroit show, Kia has introduced the concept of Telluride which looked significantly different from any other SUVs from the brand. After two years, it has been confirmed that the Telluride will go into production at the same show this year. Spy shots have come out but only show prototypes under heavy camouflage. Though there are not much we can say about the exterior design except for its big size as the spy shots show, a new report has disclosed more things about the new Kia Telluride. According to the report, it takes up almost all the design from the concept.

The new Kia Telluride is expected to stand out when put among lesser Sorentos if with ample bespoke styling tweaks. Emulating the Borrego (or Mohave), the model is seen to have a folding 3rd row and 4 captain’s chairs. When it officially comes out, the Telluride has a 7-seater arrangement which is promised to boost the second row’s comfort. 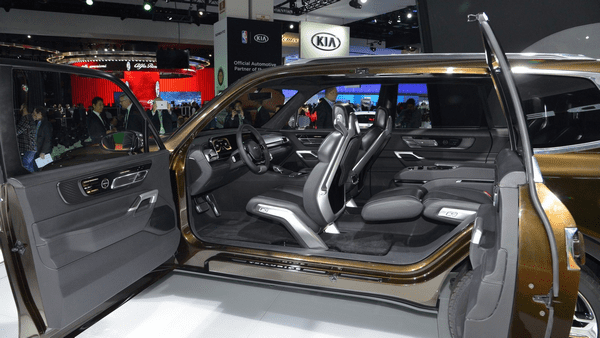 Emulating the Borrego (or Mohave), the model is seen to have a folding 3rd row and 4 captain’s chairs

Not like what they said, the model won’t have a rear-wheel-drive but front-wheel-drive platform instead which makes use of the HTAC all-paw, a new system Kia and Hyundai developed. It should go without saying that the SUV will come with All-Wheel-Drive.

>>> Learn more about the current vehicle line-up of Kia PH It may come as no surprise that a 4-cylinder engine like a bi-turbo 3.3-litre V6 will come in this model concerning its massive appearance. An 8-speed automatic gearbox should not fail to come in the new Telluride. The price is expected to be high for the high-standard equipment such as E-folding third row and 360-degree camera.

The official release date the Kia Telluride has yet to be unveiled though it is believed to soon come to light before the close of the decade.