It’s most likely that the Jeep Wrangler JL 2019 arrives in India sometime in the fourth quarter of 2018.

Plans to introduce the Jeep Wrangler JL 2019 in the Indian market have been delineated by the car marker. As a result, spy shots of the model are flooding the Indian internet. Most recently, Tech N Wheels unravels a photo of the new-gen Jeep Wrangler’s two-door version.

The test mule showed an entirely naked body of the vehicle, which indicates the underlying mechanicals are being evaluated for the market. Previously also in July, another spy shot discovered a sticker confirming “on test by ARAI” labeled on a two-door Jeep Wrangler JL. 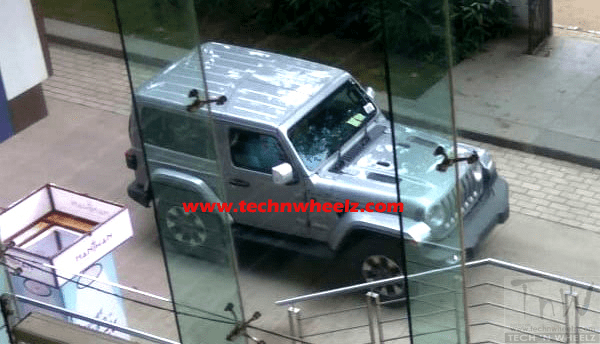 The Jeep Wrangler JL 2019 will come with only slight enhancements (Image Source: Techwheelz)

There is not much to expect you’re looking forward to significant redesigns; the Jeep Wrangler JL 2019 will come with only slight enhancements. The most dominant revamp is composed of the lower belt line, bigger windows, turn signals set on the wheel flares, fixed A-pillar, more rakish windshield, hood latches with a new look, and the revised swept back grille made to look keystone-shaped 7-slot. The model for the international markets will come with a slew of different windshield, top and door combinations.

The Jeep Wrangler stays loyal to the fourth-gen layout with no-frills design. More complexity is applied to the interior to boost its eye-drawing styling as well as lots of newly-introduced amenities. To name some for your inquisitive mind, they are Android Auto and Apple CarPlay-compatible 8.4-inch touchscreen infotainment system, 7-inch LED driver info display, weather-proof surround push-button ignition, and Passive keyless entry. Jeep promised to introduce 3 engine choices in the Wrangler JL consisting of 2.2L turbocharged diesel mustering up 200 PS and 450 Nm, 2L turbocharged petrol putting out 272 PS and 400 Nm, and the 3.6L naturally aspirated petrol cranking out 284 PS and 347 Nm. Equipped in all engines is the fuel-sipping stop-start techno. The 8-speed automatic gearbox is channeled to turbocharged engines while the 8-speed automatic or 6-speed manual unit works in conjunction with the naturally aspirated powertrain. The off-road features come optional in variants you pick which are the Rubicon, Sahara, and Sport/Sport S.

It’s most likely that the Jeep Wrangler JL 2019 arrives in India sometime in the fourth quarter of 2018. Prices are yet to be revealed.

In the meantime, let's savor the following photos of the exotic look of the Jeep Wrangler Unlimited Sahara 2018.