Toyota Motor Philippines (TMP) is set to exit 2019 with an unprecedented share of the Philippine market, propelled by refreshed versions of its popular models as well as efforts in marketing alternative energy vehicles.

"The sales and marketing of vehicles have never been this challenging even for TMP", he said, referencing socio-economic factors such as the TRAIN Law signed in 2017 which levied higher excise taxes on brand-new cars, as well as the entry of competing models from more aggressive rivals, notably Chinese carmakers.

According to Suzuki, Toyota Motors Philippines managed to increase its year-to-date market share from a peak of 38.2% in 2018 to an estimated 39.3% this year. "As further proof, our fast recovery last October gathered an uncontested 43.6% market share, Toyota’s highest ever."

He shares that the company achieved its 17th consecutive triple crown award, putting it in ninth place of Toyota's Top 10 Global Distributor Rankings, ahead of Saudi Arabia. 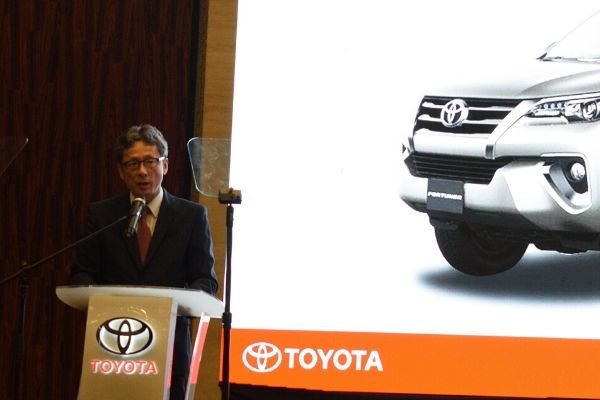 A total of 71 Philippine dealers (including those for its premium Lexus division) has made Toyota the fastest-growing brand in the Philippines, says Suzuki, coinciding with the introduction of Toyota-made vehicles such as the new-generation Innova MPV and Fortuner midsize SUV in 2016, the Wigo city car in 2017, and the Rush small SUV and all-new Vios subcompact sedan in 2018.

He shares that TMPC introduced a number of notable firsts in 2019, both for the company and the Filipino motoring public.

"To start is the all-new HiAce world premiere held last February. The Philippines is the first country to have this model, as we are the top market for utility vans globally. The second is the all-new GR Supra last July, making the very first time that the legendary nameplate Toyota Supra is made available for retail here in the Philippines. Lastly is the Corolla Altis Hybrid...which solidifies our call for cleaner emissions."

Prior to the release of the Corolla Altis Hybrid, TMPC's previous efforts in promoting alternative energy included hosting the Toyota Hybrid Electric Technology Conference, and investing PhP60 million on its 1-Megawatt solar array project, with assistance from the Japanese government and renewable energy company Spectrum. Suzuki claims this facility has helped reduce TMP's energy requirements for its operations by 12% and emissions by 4%, resulting in annual savings of PhP 9 million.

The company has also embarked on an education program for alternative energy through its Hybrid Campus Tour Series. "Toyota has partnered with Mapua, De La Salle University, Don Bosco and UP Diliman, with more schools to follow in the coming year,"  he says. Mr. Suzuki posing with guests from the media.

TMP is currently one of only two local automakers signed up under the Comprehensive Automotive Resurgence Strategy (CARS) Program, which aims to transform the Philippines into a regional automotive manufacturing hub by attracting new investors, stimulating market demand and implementing industry regulations.

One of the steps toward these goals is localizing parts manufacturing for domestic models. To that end, Suzuki notes that TMP and its suppliers have already invested a total of PhP 5.38 billion so far to localize its parts, using the new Vios as an example.

"TMP has now achieved 58% localization of total body shell weight of the Vios, far exceeding the 50% CARS Program requirement. We are positive that we will meet the 200,000 units CARS Program target for the Vios within six years."

He bares that TMP will be investing PhP4.5 billion to develop Toyota's Luzon hub, seen to revolutionize its efficiency in terms of logistics and manpower operations. The facility is expected to be operational by the second half of next year.

Suzuki also used the occasion to announce that he is stepping down as president of Toyota Motor Philippines, as he committed that the TMP's current initiatives will be sustained in the coming year. The Vios Racing Festival, for instance, will have increased local integration for Toyota Gazoo Racing activities, apart from inviting younger generations of drivers as well as casual racing fans to e-sports conventions.

He also revealed that the Toyota Mobile App is now available for download, which will enable users to access relevant information such as product specifications, dealer branches and aftersales support with just a few clicks on their mobile devices.

Suzuki also disclosed that TMP is exploring the possibility of offering long-term leasing programs to the Philippine market, to be able to to cater to a wider variety of consumer budgets and preferences. TMP hopes to sustain its momentum well into the next year

For more industry news like this one, keep reading Philkotse.com.