The Mitsubishi Strada as we all know is an already capable truck by itself and has been around in the Philippines for quite some time now. Mitsubishi took the Strada into their mad scientist lab of sorts to produce something so beautifully tough and intimidating; the Mitsubishi Triton Absolute. Triton being the Strada’s name in other markets other than the Philippines.

The Mitsubishi Triton Absolute isn’t by any means available anytime soon because of now, the vehicle is still a concept vehicle Mitsubishi has come up with to possibly rival Ford’s Ranger Raptor. The Triton Absolute in all it's off-road glory

For some who definitely want it, there’s good news because according to latest car news sources from Australia, the Triton Absolute will be shown around in different areas this year all to test the waters so to speak. 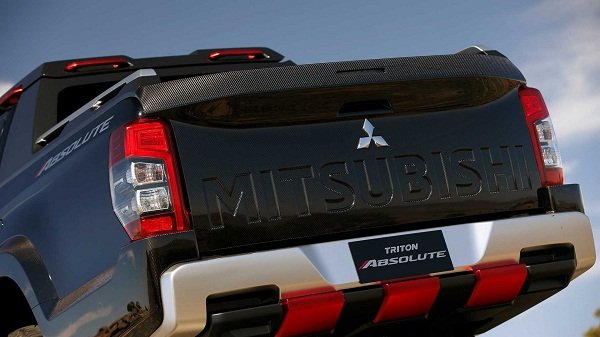 Even the rear end of Mitsubishi Triton Absolute has carbon fiber

It also has a sizable sports bar over the bed. Towards the sides of the vehicle, one will immediately notice that the Triton Absolute rides higher than the GLS Strada because of a 2-inch lift kit and of course the wheel wells appear larger because of the beefy carbon fiber fenders flares it has around it.

On top, the concept vehicle also has added LED bar lights which are presumably fog lights which are integrated into a tonneau cover. Down below the truck has four tough looking wheels which have equally imposing off-road tires.

Overall, the additions made over the GLS Strada to create the Triton Absolute make the vehicle more robust and more functional in very rough terrain. When it comes to the interior of the Triton Absolute concept, Mitsubishi has yet to reveal details regarding the matter but we might take a little bit of guessing. If it didn’t change much, it still has the 2019 Strada’s soft surfaced interiors with finely stitched covering all around, the 7-inch touch screen display in the middle of the dash with Apply CarPlay and Android Auto and of course powered seats. Now if Mitsubishi did indeed revise the interior for the Triton Absolute, they might give it more red details and accents reflecting the splashes of red found outside on the skid plates.

Also with relation to the engine of the new Strada, Mitsubishi also did not disclose any details but the current Strada that it is based on comes with a 2.4-liter turbodiesel engine that makes up to 178 hp and 317 pound-feet of torque.

While the horsepower is a little lacking than its rival the Ford Ranger Raptor, the Absolute concept has a larger tow rating at 6,843 pounds in comparison to the Raptor’s 5,511 pounds.

While being a concept vehicle, The Mitsubishi Triton Absolute is a very exciting vehicle indeed especially if Mitsubishi decides to tune the engine further to make more horsepower. Here in Philkotse.com, we hope to see the Triton Absolute as a completely available vehicle for the Philippine market as there is a quite sizable following in our country in terms of trucks and off-roading in general.