How the Land Rover Defender has changed since 1948

If we were to be literal about it, the Land Rover Defender only emerged in the 1990s. But to disregard its history stemming from post-war Britain would be doing its predecessors a great disservice. It's come a long way from being just a farm implement

It was 1947, the war had just ended, and Land Rover was losing its market for upscale sedans. Chief designer Maurice Wilks kept an army surplus Jeep at his Anglesey farm, and was impressed with its simplicity and capability. He wanted a similar vehicle that could tackle the hard jobs around the farm, without the unwieldy size of a typical tractor.

Maurice joined forces with his brother Spencer, who was also Rover’s managing director, in bringing such a machine to life. The earliest sketch was made, of all places, on an exposed mudflat at low tide in Anglesey’s Red Wharf Bay.

Maurice proceeded to build a prototype using a Jeep 80 chassis and a 1.6L Rover engine mated to a Willys/Ford two-speed transfer case. It had a power-take-off mechanism for attaching various farm tools, since the vehicle was meant to be used by farmers. The first Land Rover, retroactively called the Series I, entered production in 1948. It used a steel box-section chassis, and since steel was heavily regulated by the government in those days, the body shell was made from an aluminum alloy called Birmabright.

The straight body panels had minimal creases and curves to simplify production. It was available in different shades – as long as it was army surplus green, the only plentiful color after the war. The Series I ran on a 1.6L engine that produced around 50 hp, linked to a four-speed manual transmission and a free-wheeling four-wheel-drive setup. Land Rover sold 8,000 units that year, and double that in 1949, helped by a large order from the British Army.

A larger 2.0L engine was fitted for the 1952 model year, and the semi-permanent 4WD system was replaced with a more conventional drivetrain. By 1954, the wheelbase was lengthened to 2,184 mm.

A 2,718-mm wheelbase pickup version was introduced, which became the basis for a five-door station wagon model in 1955 with seating for up to 10 people. The wheelbase was again increased by 51 mm in 1956, and the following year, a new 2.0L 52-hp diesel engine was introduced, one of the first high-speed diesel engines developed for road use.

>>> Related: Get to know the 2021 Land Rover Defender, now in the Philippines The barrel-side waistline made its debut on the Series II

A major styling revision came in 1958 with the Series II, the first to use the now-distinctive barrel-side waistline. A new 2.25L gasoline engine also made its debut, churning out 72 hp and 168 Nm of torque.

This would be the standard power unit for all Land Rovers until the mid-1980s. The Series II was offered in 2,235- and 2,718-mm wheelbase versions, with the latter introducing a 12-seater variant using the station wagon body style. The Series IIA followed in 1961, carrying only minor cosmetic changes from the Series II. The most notable addition was a 2.25L diesel engine, followed by a 2.6L gasoline mill after 1967 for the long-wheelbase models.

Ending a long-standing design feature, the headlamps were moved from the grille to the wings in 1969. The Series IIA is widely considered to be the most durable in the range, and customers agreed by purchasing 25,000 units between 1969 and 1970. This was followed by the Series III in 1971, still mostly retaining the outgoing model’s attributes, with the metal grille replaced by a plastic one. The mainstay 2.25L gasoline engine earned a slight power gain by increasing the compression. The Series III was the first Land Rover to use synchromesh on all four forward gears.

Inside, a new molded plastic dashboard took the place of the original metal one, and the centrally-mounted instrument cluster was finally shifted to the driver’s side. Five main bearing crankshafts were added for rigidity, and the transmission, axles, and wheel hubs were reinforced. This was to address long-standing complaints that the rear axle half-shafts would break under heavy use. The Land Rover 110 would be launched in 1983, the name referencing its wheelbase in inches. This was soon followed by the shorter Land Rover 90. Both models sported more modern bits such as coil spring suspension, a taller one-piece windshield, an updated interior, and permanent all-wheel-drive with a lockable center differential.

A 2.5L fuel-injected diesel engine generating 68 hp was introduced. Other options included body graphics, radio-cassette players, headlamp washers, and external carrying accessories such as surfboard carriers. These features enabled the Land Rover 110 and 90 to be marketed as a private vehicle for recreation.

A third wheelbase model was released, called the 127. It was intended as a vehicle for heavier loads, best suited for utility companies and military use. The 127 was assembled on a dedicated production line, and used the same grille badges found on the Series III V8 models. By the next decade, the Land Rover Defender name would be formally adopted, in order to differentiate the 90 and 110 from the more lifestyle-oriented Discovery model. A new diesel engine, the 2.5L 200Tdi capable of 107 hp and 264 Nm of torque, allowed the Defender to cruise at high speeds and tow loads uphill. A second high-performance diesel mill, the 2.5L 300Tdi packing 111 hp, came in 1994.

By this time, the Defender targeted a more upmarket crowd, with limited edition vehicles outfitted with special features such as a rollover cage, alloy wheels, automatic transmission, air conditioning, and a 4.0L V8 sourced from the Range Rover. A Defender 110 double cab was also introduced, that featured 4x4-style seating and an open pick-up rear.

In 1998, increasingly stringent Euro emissions standards forced the Tdi series engine out, to be replaced by the Td5 2.5L five-cylinder turbodiesel. Traditionalists feared that the engine’s electronics were vulnerable to extreme conditions, but the claims were eventually proven without merit.

The XS luxury model would come about in 2002, equipped with a heated windshield, heated leather seats, antilock brakes, and traction control. The instrument panel was also improved, and it was the first Defender to come with front power windows. For 2007, the Defender had its drivetrain revised again, replacing the Td5 with a Ford Duratorq engine that generated 122 hp and 359 Nm of torque, accompanied by a new six-speed gearbox.

The hood was redesigned with a pressed bulge to fit the new engine while complying with pedestrian safety standards. Forward-facing rearmost seats were introduced, as the European Union had banned side-facing seats for safety reasons, and this placed the Defender on par with its rivals.

By 2012, the existing Defender was due for a replacement. Final changes included a smaller 2.2L diesel power plant that used a particulate filter for the first time on a Defender, as well as a soft-top body style option. On January 29, 2016, the final Defender – a soft-top 90 variant – rolled off the Solihull production line, ending an era for Land Rover.

The company would start the next chapter on September 10, 2019, introducing the all-new Defender at the Frankfurt Motor Show. As the first all-new update for the model since 1983, the new Defender comes with a host of features designed to comply with global regulations.

Sporting bigger dimensions than its predecessor, the new Defender again comes in 90 and 110 variants, while sporting a more streamlined appearance that pays tribute to the original Series I model. It now rides on a unibody construction, instead of the body-on-frame build that has defined previous Defender models. 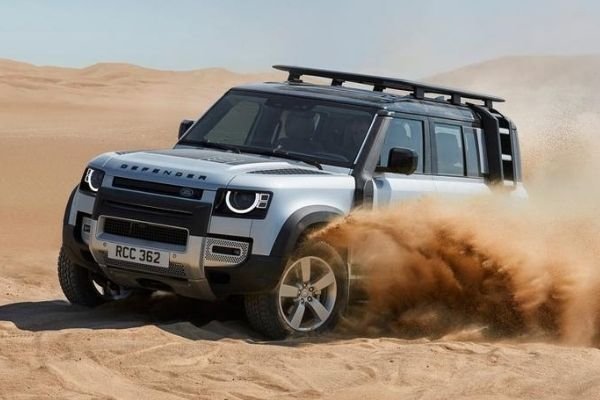 There’s also an array of driver-assistive technologies such as a 360-degree surround camera system, adaptive cruise control, and blind-spot assist.

Find out how your favorite rides evolved through the years at Philkotse.com.