By creating the Future Bus, Mercedes-Benz desires to bring autonomous transportation to the public.
Mercedes-Benz has achieved a significant breakthrough in developing autonomous vehicles. The evidence is that a new bus called “Future Bus” will soon be considered a mean of public transport. Future Bus will soon be considered a mean of public transport
Although the bus has still being tested, it was mightily impressive when having successfully moved through a distance of 19 km from Amsterdam's Schiphol airport to Haarlem (Amsterdam), a route with many traffic lights and tunnels.

>>> Do you know Audi is the first brand to be licensed to test autonomous vehicles in New York? Read full our article for more details. Taking advantage of most updated technologies, the Future Bus is programmed to navigate into the bus stop with absolute precision. Besides, the City Pilot enables it to pull in so that there is less than 10 cm between the bus and the curb, furthering passengers’ movement. The Future Bus can hit a top speed of 70 km/h and operate only in bus lanes in order to navigate easily. City Pilot enables the bus to pull in so that there is less than 10 cm between the bus and the curb
>>> View more: 2017 Mercedes E-Class E 220 d LWB rolled out with attractive price

Additionally, the bus is fitted with camera systems, radar sensors, and GPS. The German automaker also confirms the Future Bus will be more fuel-efficient than regular buses thanks to the City Pilot.

Inside, Mercedes gave its Future Bus an awesome lounge-like design. Moreover, the bus also gets Wi-Fi and two 43-inch displays placed over the console where news, routes, and other information are shown. 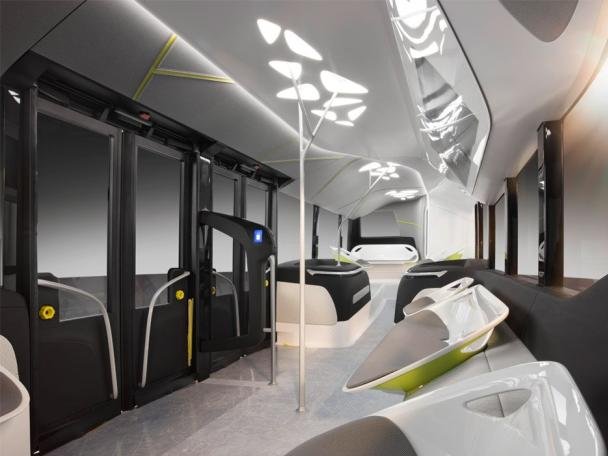 Inside, Mercedes gave its Future Bus an awesome lounge-like design
One that truly piques our interest is the interior space. It is divided into three seating areas: one area is for those who are in hurry, the second is for passengers who want to find out information about the route and the last one is designed for those who need to go on a long journey.

As the Future Bus is semi-autonomous, a human driver is still necessary to monitor surroundings and deal with incidents.