Spied! The 2018 Mercedes-AMG C63 spotted testing.
High-end, performance, and comfort – three words that sum up what the 2018 Mercedes AMG C63 will bring to the table. What awaits customers when the very popular German car manufacturer finally released the newest addition to its C-Class lineup of cars? It is now time to take a good look at the C63. You do not have to be an expert in the three-pointed star brand to discern the four-door in the photo gallery as a member of the Mercedes-AMG family.

Let’s us have a peek on what the all-new Mercedes AMG C63 has to offer.

The upcoming Mercedes-AMG C63 sedan prototype was previously spotted testing in harsh conditions, hiding what seems like slightly redesigned bumpers front and back, and wearing a set of halogen headlights. The upcoming Mercedes-AMG C63 sedan prototype was previously spotted testing in harsh conditions
Perhaps it becomes even easier if you have recently taken a look at its coupe brother as this C63 sedan test mule features halogen headlights (as mentioned earlier), which are usually seen for entry-level models in the premium category. But don’t expect to see them in the final production C63 facelift, which will be equipped with brand new LED headlights and tail lights.

What is obvious is the 2018 model’s front bumper will see some modest changes, which a new design for the air intakes and probably a new and better radiator grille in GLC63/GLC63 Coupe style. Expect small changes in the rear, with a slightly redesigned bumper.
2018 Mercedes-AMG C63 - Spy Shots
What is more, the C-Class facelift gets updates in the interior, which include the upgraded infotainment system. The system will be controlled by a brand new touchpad. Also, whether or not the sedan will update the steering wheel as well and add touch-sensitive buttons on the E63, remains to be seen.

Some reports say that the mid-cycle refresh for the vehicle, including the range-topping C63, could get a dual all-digital screen setup as an option, with the cluster and dials being also updated. But that remains to be confirmed.

At this time, it is not clear whether the 4.0-liter Biturbo V8 engine of the C63 will get any upgrade, but the fact that it already offers plenty of power and torque makes customers believe it will be left untouched. 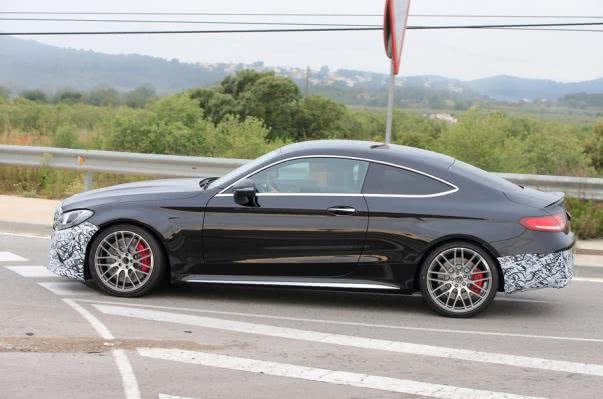 This C63 sedan test mule features halogen headlights which are usually seen for entry-level models in the premium category
As for powertrain, there is also no indication as of yet the German car maker is going to boost output in the upcoming C63 and C63S over 463 hp and 503 hp respectively, which is what they currently generate.

Expect the launch of the facelifted C63 to take place before the end of this year, along with a market release in early 2018. Once the car lands, it will continue on with its mission to fight the likes of the BMW M3, Alfa Romeo Giulia QV and the on-sale Cadillac ATS-V.

All in all, the 2018 Mercedes AMG C63 pictured in the photo gallery is no that close to the final version, but it is certainly getting there.

>>> View more: Mercedes-AMG Project One to get F1 powertrain