DPWH believes that the extra 820.62 lineal meters of service road over the newly-built reinforced concrete box culvert will reduce the impact from perennial flooding from Timog Avenue to Scout Albano.

Movement of cars along some parts of Quezon City will be considerably enhanced with the completion of two additional vehicular lanes for moving cars on top of the Php165 million flood control project of the Department of Public Works and Highways (DPWH) in the area.

Secretary of DPWH Mark Villar said that the flood control project covers the construction of reinforced concrete box culvert. Thanks to the project, the capacity of Anaran Creek can be increased in order to reduce the impact from recurrent flooding at South Triangle area, especially at Panay Avenue and Mother Ignacia Avenue.

>>> DPWH in cooperation with the Department of Energy (DOE) have signed a joint circular to fast-track the relocation of electric posts blocking widened roads. Click to find out. The two expanded roads were officially opened on Monday, August 7, 2017. DPWH believes that the additional 820.62 lineal meters of service road over the newly-built concrete box culvert will help reduce and prevent the detrimental effects of flood from Timog Avenue to Scout Albano.

According to Villar, the 1.1km newly widened route will expand the capacity of Anaran Creek by 123.4% and curb traffic congestion in Quezon Avenue. It is considered an unofficial alternative route to Timog Avenue and EDSA.

On the other hand, the 1.2km Sergeant Esguerra Road was also formally inaugurated by the DPWH.

>>> The 3.2km Laguna Lake Highway is expected to shorten travel time between Taytay, Rizal and Bicutan, Taguig from 1 hour to just 30 minutes. Read our article for more information. 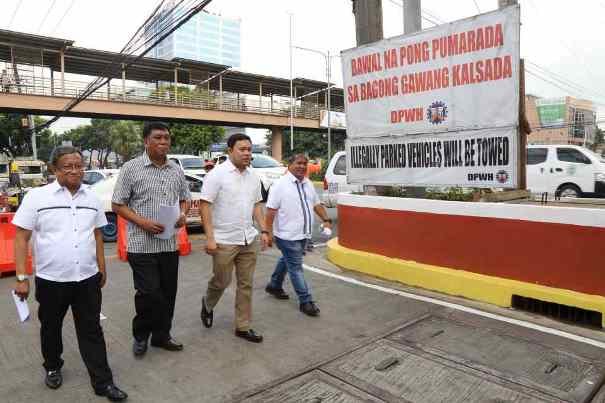 Did you have sore feet from walking on narrow and hard asphalt pavement of 9.8 meters? What has been on the news is that this pavement was replaced by a new concrete pavement of 14 meters. The opening of the 2 newly-constructed lanes is expected to ease heavy traffic along Quezon Avenue, EDSA, and Timog Avenue.

Villar also said that the rapid implementation of these projects is thanks to the agency's 24/7 construction scheme in line with President Duterte’s mandate to “Buid, Build, Build”.