Celebrate a century of motoring heritage with Mitsubishi

Mitsubishi will hold its centennial anniversary from June 8 to 11.
Mitsubishi is celebrating its 100 year expo to wow the public with one of a kind motor show. Did you know that the first car to wear the Mitsubishi badge was the Mitsubishi Model A that first saw series production in 1917. Since then, the Japanese carmaker has gone on to product a vast range of passenger cars and commercial vehicles. Fast forward a century, and the time has come to celebrate a century of motoring heritage with Mitsubishi.

This year, in celebration of its centennial anniversary, Mitsubishi PH will be holding a special birthday which promises a day of fun not only to Mitsubishi addicts and car enthusiasts. The grand expo will be held from June 8 to 11 at the World Trade Center in Pasay City. Get ready to see the best of Mitsubishi in the four-day event as the company will give you a glimpse on its current lineup. Moreover, the event will showcase Mitsubishi’s past, present, and future.
>>> Related: Mitsubishi cars for sale at affordable prices 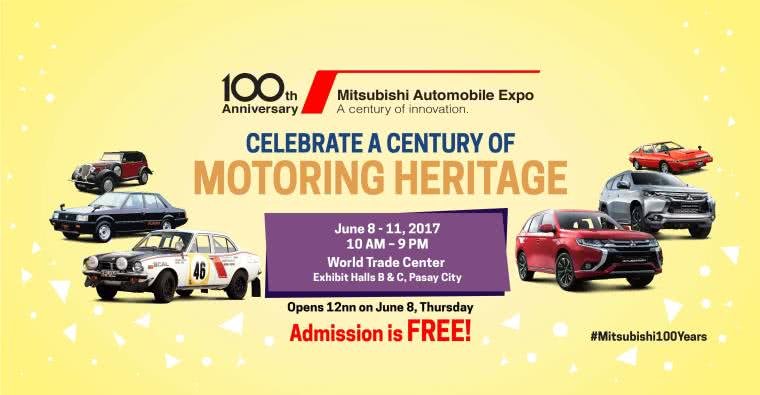 The grand expo will be held from June 8 to 11 at the World Trade Center in Pasay City
The brand’s past will be seen via a display of cars like 1937 Race (Circuit Car), the 1985 Paris-Dakar Rally winner Pajero, the WRC Lancer 2005, and the Outlander PHEV that won the 2015 Baja Rally. The present, meanwhile, will be showcased in the entire lineup of the company’s local offerings. Attendees may have a chance to test drive the newest Mitsubishi vehicles.
As for the future, the pure electric i-MiEV and the hybrid Outlander PHEV will be on hand to show people the brand’s ability when it comes to these types of new technologies. Well, it is the great way to experience the various facets of Mitsubishi.

New 2017 Mitsubishi Outlander Phev Review
Mitsubishi ambassadors Maine Mendoza and Alden Richards, as well as comedian Ramon Bautista will drop by the show on June 10 for a fan meet-and-greet. Mitsubishi will also hold a Mitsubishi Owners Day, whereas Nickelodeon will conduct fun games and activities courtesy. There will be an art workshop by Fernando Sena on June 11. Live popular bands, food, and surprises also await all guests.

So, come and celebrate with the three-diamond badge in this one of a kind anniversary expo! Admission is FREE.