Toyota brings a utility version of the Land Cruiser Prado 2018 with a lot of refreshments.

Toyota has lately revealed a “Utility” version of the Toyota Land Cruiser Prado 2018 in the UK market. Despite being a little aesthetically pleasing, this distinctive LC Prado still has good off-road capability thanks to its 4x4 drivetrain, short overhangs and great ride height.

The Toyota Land Cruiser Prado Utility 2018 gets a familiar style of standard models albeit being decorated with less pizzaz and chrome. It is available in both long wheelbase (5-door) and short wheelbase (3-door).

At the front fascia, the vehicle comes adorned with a matte-black grille and standard halogen headlamps, along with new 17’’ steel wheels. 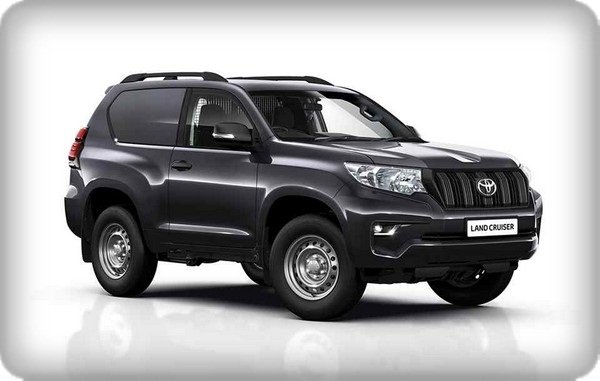 To enlarge the cargo space, Toyota decided to take off both the second and third seating rows, allowing the LC Prado to easily load high and tall items. The Japanese carmaker even equipped a flat non-slip floor tray to ensure that goods do not move during the transportation. Additionally, Toyota has added a rear bulkhead divider between the cargo and front seats to provide easier and safer entry to the cargo. To enlarge the cargo space, Toyota decided to take off both the second and third seating rows

Despite being a hauling vehicle, the Toyota Lan Cruiser Prado Utility 2018 also receives some convenient equipment in the cabin including cruise control, air-conditioning, a 6-speaker sound system with CD, keyless smart entry, Bluetooth and USB connectivity. Despite being a hauling vehicle, the Toyota Lan Cruiser Prado Utility 2018 also receives some convenient equipment

Power comes from a 2.8L turbo-diesel 1GD-FTV engine which works in a conjunction with a 4WD system and a 6-speed manual transmission. The engine whirs 0 – 100 km/h in 12.1s before topping out at 175 kph.

>>> Related: Check out the Toyota Land Cruiser Prado 2012 for sale

This all-new Toyota Land Cruiser Prado Utility 2018 promises to be a bitter rival of many other off-roaders. Still, Toyota hasn’t revealed anything about the next destination of the car except for the UK.

The price of the Utility version also hasn't been disclosed. In the meantime, let's check the up-to-date price of the Toyota Land Cruiser Prado 2018 in the Philippines: