Airbag warning light is on: 4 Reasons & How to fix it

Fix this issue with or without an OBD-II scanner.

Airbags have been protecting car users since 1952. Back then, the early forms of these inflating safety devices worked mostly through mechanical means. Later in the 1960s, the airbag was then improved to use more electronics combined with chemical inflation systems. To this end, airbags have become faster and more able to protect a car’s occupants during a crash. The downside to this is that it has become much more complicated. It needed a bunch of sensors to work, and so issues will arise in some instances.

On modern cars, airbag issues will present themselves in the form of an airbag warning light. So, what are the reasons as to why your car’s airbag light is turning on, and how do you fix it?

Four reasons why your airbag light is on On some cars, the warning is more apparent [Photo: Reddit user greyven1]

It might be that the sensors were tripped accidentally, or the sensors were exposed to something that damaged them directly. If the latter was the case, you might need a replacement. If it was the former, then all you need to do is to reset them.

As its name implies, the airbag module is an electronic device. That said, it doesn’t work well if exposed to water, so it will trigger the car’s airbag warning light. This might come in the form of water damage caused by flooding, or something as benign as spilling water or drinks on the seat. Of note, a modern car’s airbag module is often positioned under the seat. Corrosion on the module caused by moisture can also trigger the airbag lights. 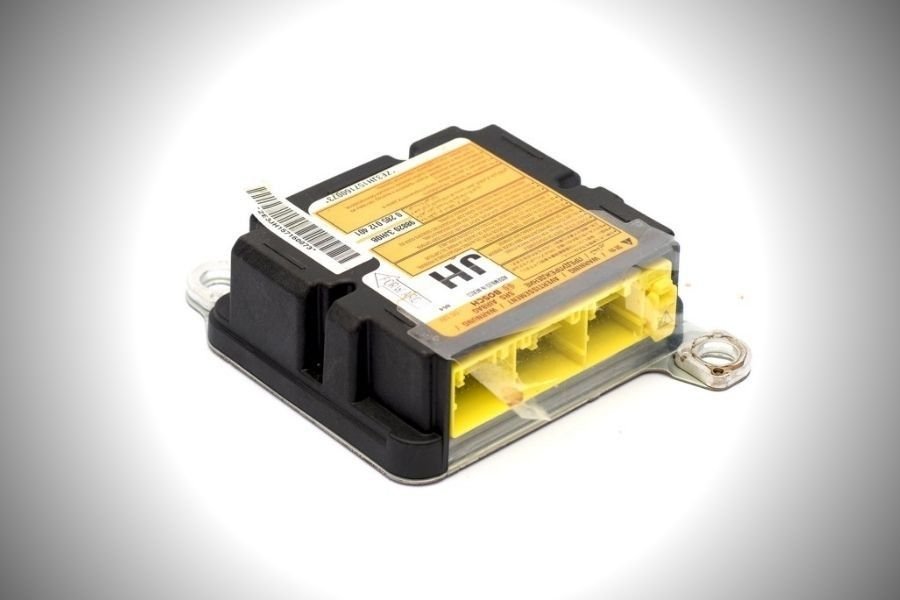 A typical airbag module. Picture here is a module from the Nissan Frontier

The driver’s airbag on the steering wheel requires an additional part called the airbag clock springs. This is because the steering wheel needs to rotate, but the bag mounted inside the wheel needs a way to connect to the electrical system. To do this, it uses the part in question. This part however wears down overtime.

Another cause for the airbag light to turn on is airbag deactivation. This might be caused by issues with the airbag sensors, or a fault in the many components of the airbag.

How to fix with activated airbag light without a scanner

Note: If you’re unsure about doing it yourself, it is always a good idea to let the professionals handle it. Airbags after all are sensitive devices that can deploy accidentally if you commit a mistake. Once deployed these need to be replaced and that’s an additional cost you do not want.

1. To do this without a scanner, turn on your car’s electronics without turning on the car. Wait for the airbag light to turn on.

2. The light will stay on for about seven seconds then it will turn off. After it turns off, shut off the car completely and wait for three seconds.

3. Repeat steps one and two twice.

If you’re using a car with a push to start button, leave your foot off the brake and press the button once. To turn off all power, just push the button again. Note also that this method might not work with some car models. Also, some airbag systems will need to get their issues fixed first before you can turn off the airbag warning light.

How to fix with activated airbag light with a scanner

1. Before doing anything else, check if the car has a passenger airbag toggle switch. It might just be turned off by mistake.

2. Find your OBD-II port. This is usually located underneath the dashboard. Connect the OBD-II scanner device and allow it to scan for trouble codes. Find the codes related to the airbag system.

3. The device will tell you the specific issue with the said system. If you find some, we highly advise you to bring your car to your trusted service center. Do note that an OBD-II is not some magical device that can make the problems with your airbag system go away. It just helps you detect what needs fixing thus saving you a lot of time. For more helpful car maintenance tips, safety tips, and tips on car buying and selling, keep it here on Philkotse.com.

1. Can an OBD-II scanner turn off a car’s warning lights?

Answer: The OBD-II system is not a magical fix to all of your car’s problems. Instead, it’s like an air-planes flight data recorder that records the condition of the car and indicates what’s wrong with it. Resetting or clearing the OBD will also eliminate all the data that was stored and also turn off warning lights. Without fixing the root cause however, the warning light will come back on eventually.

2. Can I legally drive with deactivated airbags?

Answer: In the context of the Philippines, yes you can drive without airbags. We do not recommend that though.

3. How do I replace an airbag sensor?

Answer: We do not advise replacing an airbag sensor by yourself at home. Instead, take it to your car brand’s dealership and have their mechanics do it for you.

4. Can I drive with my airbag warning light turned on?

Answer: Yes, you can, but it’s advisable to get it fix as soon as you can.

Answer: Typically, a modern car’s airbag is made out of nylon. The gas used to inflate it is argon or nitrogen.