The Honda pavilion at this year's PIMS is teeming.

A favorite of car enthusiasts and tuners alike, Honda has been hitting home-runs of late, with the release of the diesel CR-V and affordable MPV models such as the Mobilio and the BR-V.

The Honda pavilion at the 2018 Philippine International Motor Show (PIMS) had a special surprise, hinting at what the company has been secretly at work.

"Here at Honda, our dream has always been to combine the joy of mobility to our customers,” said Honda Cars Philippines Inc. President and General Manager Noriyuki Takakura. “This allows us to create models that cater to their needs...we at Honda look ahead with the promise to deliver innovative products that enrich our customers' joy."

Mr. Takakura proceeded to enumerate the models that have contributed to Honda’s recent successes in the Philippine market, the very same ones that adorn their exhibit, starting with the City which he says is their best-selling model to date. The PH-made BR-V to hit dealerships this November

As Honda’s first affordable SUV, the BR-V follows the City in terms of units sold, some 11,000 since the former was launched in 2016. Since that time, the BR-V has been honoured with several awards, including the 2017 Best Compact Crossover 2WD from the Car Awards Group, Inc. But according to Takakura, there is even bigger cause for celebration where the BR-V is concerned.

“The Honda BR-V will now be produced in our Santa Rosa, Laguna plant,” he announced. “The Philippine-made BR-V will be available to Honda dealerships starting November 2018. Thus, our customers can enjoy the same exact BR-V sold all over the world with no waiting time."

The diesel CR-V was also on center stage, selling over 3,000 units to date and reaping automotive honors as well on the strength of its interior space, power, fuel efficiency and ride comfort. Takakura called attention to the fact that the latest Honda CR-V on display was equipped with Honda Sensing technology, a suite of advanced driver aids designed to reduce the likelihood of collisions and accidents, by making drivers aware of potential blind spots as the vehicle is in motion. The CR-V on display was equipped with Honda Sensing technology

“To experience Honda Sensing technology today, we invite you to visit our interactive safety zone...here you will experience how these features alert the driver to things he might ordinarily miss while driving," he said.

One four-wheeled fantasy of Filipino car nuts is the Honda Civic Type R, a thoroughly aggressive-looking rendition of the already sporty Civic road car. Once thought of as a pipe dream, the car managed to finally arrived on Philippine shores, where it was sold out within 48 hours of launch. 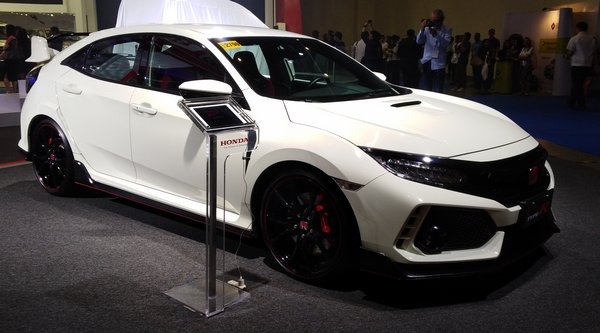 “Demand for the model increased,” Takakura said smiling. “But while we announced in July this year we are bringing in a second batch of the Type R, we are pleased to share with you that all 100 units have been already sold out and are being delivered soon to their owners.”

He then mentions Honda’s racing lineage, represented by the RS lineup (composed of the Jazz, Mobilio, HR-V and Civic) in the Honda stable. The Honda Small RS Concept at the show

Sporty doesn’t have to depend on size, especially when automotive technology has already advanced to the point where performance can be squeezed out of even compact vehicles. This led to the highlight of the Honda pavilion: the unveiling of Honda’s Small RS Concept, which debuted at the Indonesia International Motor Show last April.

Indeed, Honda’s view of the future is testament to its belief in the power of dreams. To explore more cars and concepts on display from other auto giants such as Toyota, Mitsubishi, Mazda, Nissan, Suzuki, BMW and more, refer to our 2018 Philippine International Motor Show page.