If you’re looking to get a roomy, seven-seater model for your family, there’s a good chance that you’re considering a midsize SUV.

Now two of the most popular models in the said class in the local setting are the Toyota Fortuner and the Ford Everest. Two close rivals that have been trading blows since the early years of the 2000s.

Since then, both models have gone through several generation models and are as modern as you can get when it comes to on-board features and tech. But then again, which of these two are better on paper? Let’s find out by comparing the Toyota Fortuner LTD 2.8 4x4 AT, against the Ford Everest Titanium+ 2.0 Biturbo 4x4 AT. Generally, the SUV model from the American brand is a bit longer and wider than the Toyota model. It also has a longer wheelbase and more ground clearance, but then they almost have the same height.

For exterior equipment, both the Fortuner LTD and the Everest Titanium+ come standard with LED headlamps with an auto on/off function, LED daytime running lamps, LED taillights, power-folding side mirrors, and roof rails. The Everest does come with a sunroof and rain-sensing wipers, which the Fortuner lacks. Then again both models also come equipped with power liftgates.

For wheel sizes, the Toyota mode rides on a set of 18-inch alloy wheels. The Ford meanwhile comes with a larger set of 20-inch wheels.

Inside, both high-end variants of the Fortuner and the Everest come standard with leather seats, electronic driver’s seat adjustment, a tilt and telescopic steering column, dual-zone air-conditioning with rear vents, a 60:40 split for their second rows, and a 50:50 split for their third rows. Inside the Toyota Fortuner

The Everest then lacks seat cooling, which is present on the Toyota Fortuner LTD. Both SUVs then come with eight-inch touchscreen headunits. These also come with similar connectivity options, namely Apple CarPlay and Android Auto, USB, and Bluetooth. For the Ford however, it gets a 10-piece speaker set. In turn, the Toyota gets a nine-piece JBL speaker system.

In turn, the Fortuner LTD also gets a wireless smartphone charger, while the Everest Titanium+ does not.

In terms of power, the Toyota Fortuner LTD uses a 2.8-liter turbodiesel inline-4 that can make 201 horsepower and 500 Nm of torque. The said engine is then paired with a six-speed automatic gearbox. In turn, the Ford Everest Titanium+ uses a 2.0-liter Biturbo inline-4 capable of churning out 211 horsepower and 500 Nm of torque. It then uses a 10-speed automatic transmission.

Both have the same torque values, but the Everest makes a bit more horsepower. The Fortuner and the Everest also have similar suspension systems. They have a double wishbone type for the front, and a multi-link for the rear.

When it comes to safety, both the Fortuner LTD and the Everest Titanium+ come with what you’d expect from a modern SUV. Both get anti-lock braking with electronic brake-force distribution, adaptive cruise control, a reverse camera, parking sensors, hill-start assist, stability and traction control, an engine immobilizer with car alarm, as well as ISOFIX child seat tethers.

Both also get an array of driver-assist tech. Specifically, they both have lane keep assist, lane departure warning, blind-spot monitoring, hill descent control, rear-cross traffic alert, as well as a pre-collision warning system.

The Ford model does have some bits that are unavailable to the Toyota. These include tech like autonomous emergency braking, tire-pressure monitoring, and its semi-automatic active parking assist system. However, the Ford then lacks a 360-degree view camera, which is present on the Toyota model. For airbags, both the Fortuner LTD and the Everest Titanium+ gets a total of seven.

On paper, the Toyota Fortuner and the Ford Everest are just about comparable to each other. Well, save for some details like the Toyota model’s lack of a sunroof and autonomous emergency braking. Then again, it also doesn’t have a 360-degree view camera. A must-have for driving in very busy locations like Metro Manila. Do you prefer the rear of the Fortuner LTD

In terms of engine output though, the Everest offers a bit more horsepower. Then again, we can expect that real world performance will boil down to their difference in transmissions instead of power. Off-road wise though, we’re guessing that these two won’t have that many issues.

In terms of styling, we’ll leave that up to you. Also, this is just an overview comparison of each of these models’ specs, so we urge you to give each model a test drive. With that, you can arrive at your own choice of SUV. Or do you prefer the rear of the Everest? 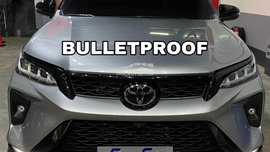 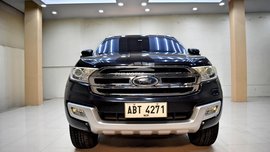