Let’s check out what the Ford EcoSport 2018 has to offer in terms of its outstanding features, specifications, prices in the Philippines, pros and cons.

The recent unveiling of the European-spec Ford EcoSport 2018 facelift with sportier exterior and enhanced technologies has given us more hints of what to expect in the Philippine version.

The EcoSport 2018 may be the most expected compact SUV this year. Prior to the latest launch of its European version, the car has already made its debut in North America and Asia Pacific in November 2016 and April 2017, respectively. In this article, Philkotse.com will give an extensive Ford EcoSport 2018 review so as to provide Pinoy car lovers an idea of what to expect when it actually arrives in the Philippine market.

Up to the present, SUV has become “King of the roads” with its glamorous and fashionable look, large storage space and off-road capability. Always catching up the prevailing trend, Ford continues to expand its SUV lineup with the launch of the Ford EcoSport facelift, which is known as the smallest car in the company’s SUV segment.

The new model will offer more power and more options and it promises to conquer the market overwhelmingly. Now, let's look through together the Ford EcoSport 2018 review on Philkotse.

You will immediately recognize this subcompact SUV is a Ford at the very moment you take a first look at the front fascia. The Ford EcoSport 2018 exterior is equipped with a familiar grille associated with horizontal bars. The front also has a small airdam with an insert around it to make it looks bigger than it actually is. Fog lights and headlights of the mini SUV are also alike to the newest Ford variants.

The 2018 model is designed with unique A-pillars which create curves at the bottom and highlight the striking edges of the car's hood, leading to a very athletic posture.

For the rear, it is almost similar to the original sport models with the same bumpers, tail lights and even wheels. However, the US-spec version is made different from its fellows with the tailgate hinged to the left and opened from right to left instead of upward. The rear also features a sculptural bodyline at the bottom end of the hatch. A reflector is placed on either corners of the rear.

Above all, there will be more color options as well as various optional added features for buyers to make their best choices. 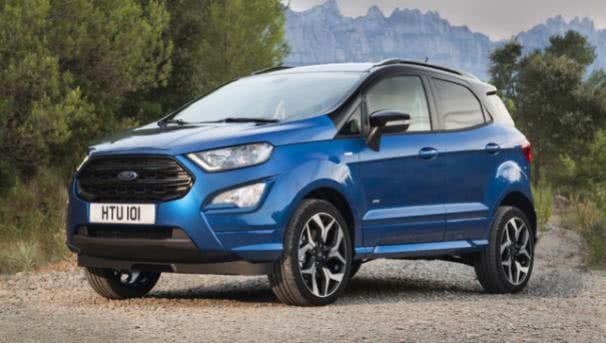 In Asia Pacific, the facelifted EcoSport looks quite similar to the pre-production US version in some respects, especially in the bolder and higher-mounted trapezoidal front grilled surrounded by redesigned headlight clusters. However, in lieu of amber side markers that we see in the US mode, the Asia-spec now features clear corner front reflectors. The high-end model comes exclusively with a chrome beltline strip.

In the meanwhile, the Euro-spec refreshed Ford EcoSport 2018 is analogous to other global trims. To illustrate, you can easily spot all styling updates of the Chinese-spec on this model. Besides, in Europe, you can opt for a swing-gate-mounted spare tire as an option. 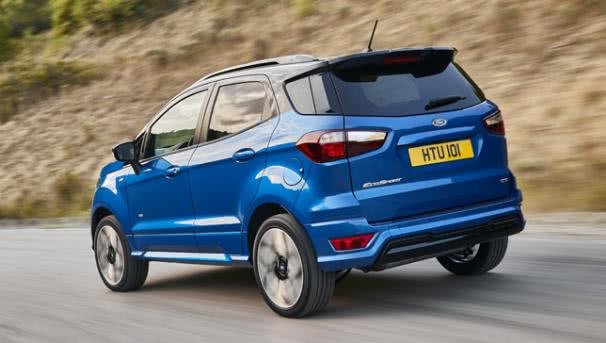 It appears that the American marque is quite indifferent to its Euro mode. But conversely, Ford actually has a great affection for European automotive market. Peculiarly, an all-new variant named “ST-Line” will make it presence here for the first time. This special model will be pampered with Ford performance-inspired front lower bumper, dark headlight bezels, side mirrors, painted roof, black roof rails, skirts and refined rear bumper together with sleek 17-inch Dark Tarnish alloy wheels.

Though Ford Ecosport is fundamentally a Fiesta, its interior is almost not the same as the inside of such small hatchback. The vehicle is designed with a sporty and mostly black interior. Thanks to a taller body giving more headroom, the model offers a spacious cabin, ensuring comfortable trip for both driver and passengers.

A disadvantage of the US-spec Ford EcoSport 2018 lies in its side-opening tailgate which might pose a trouble for urban parking, particularly on the congested Philippine streets.

The US-spec EcoSport comes with the best-in-its-class 8.0-inch Sync3 infotainment system featuring two big knobs in two corners with buttons located between the knobs. The EcoSport 2018 is equipped with a traditional-looking steering wheel. And the center console is still simple with a knob, push buttons and BVAC controls.

The Chinese version will allegedly come loaded with a new user-centric cabin interface with modern and better laid-out dashboard. Also adorned with the 8-inch touchscreen, but rumor has it that lower-end models won’t get such a large touchscreen and simultaneously, more physical controls will be positioned nearby. 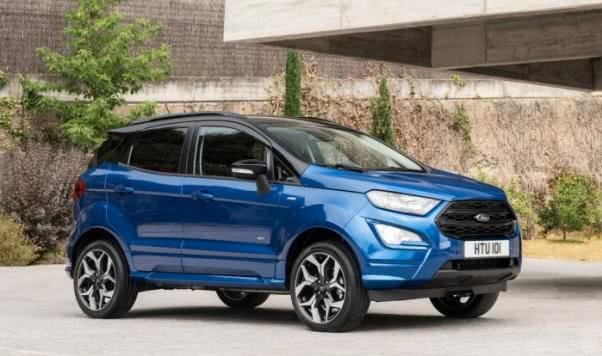 The Ford EcoSport 2018 uses a cluster of basic tools with a big tachometer and speedometer, which is just set up separately by a small digital display.

The high-end model will be offered two USB ports in the center console for phone charging with a 12-volt socket. Optional 110-volt household outlet and a second 12-volt socket are also ready for use. 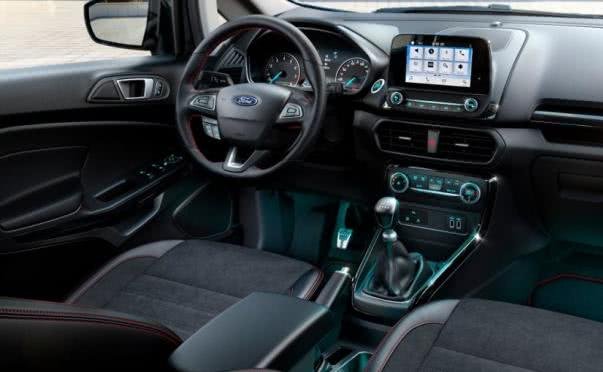 Other convenience features comprise 30 cubbies, hooks and many other storage spaces throughout the cabin.

With regard to the Chinese version, the cabin will be furnished with a new instrument cluster with an added analog temperature gauge. A media bin and two illuminated USB ports are also available in car.

Apart from primary safety feature as the outgoing model, the 2018 facelift version will be set up with six airbags, ABS with EBD and more. Particularly, the Euro-spec will get seven airbags, roll stability control, blind spot information system, reserve camera and cruise control with adjustable speed limiter.

Still, not many details about the car’s fuel economy and performance are revealed. However, Ford has confirmed that the facelift model will be powered by a base 1.0L engine with two options offered: a 3-cylinder mill and a 4cylinder power-plant. Both of new engines are mated to a 6-speed automated transmission. Furthermore, a 2.0 L unit will also be available with an intelligent 4WD system. Now, let’s focus more on each type of engines.

Concerning the 1.0 L, the engine is similar to the Focus SE sedan’s which is capable of dishing out 123 hp and 125 lb-ft of torque. This type is considered as one of the most fuel-efficient engines. Although the miles per gallon (mpg) of the Ford EcoSport 2018 is lower than the Focus SE which returns 34 mpg on combined drives (30 mpg in city and 40 mpg on highway), it still quite economical. 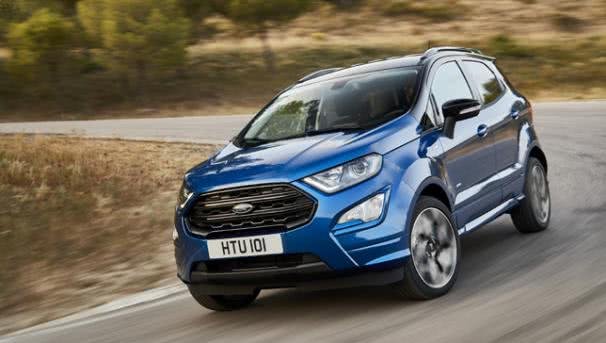 Still, not many details about the car’s fuel economy and performance are revealed

On the other hand, the 2.0 L engine inherits power from the current Ford Focus which can produce 160 hp and 146 lb-ft of torque. This is also quite good for a subcompact SUV. In terms of fuel economy, the engine impresses us with decent fuel consumption of 31 mpg on combined drives, 26 mpg in city and 38 mpg on highway.

Also sharing the 1.0L EcoBoost and 2.0L 4WD engines with the US model, the 2018 version in China will be given an extra 1.5L Ti-VCT. Paired with the engines will be also a 6-speed automatic gearbox in place of an old-school dual-clutch PowerShift system as before. Ford also added a new Auto Start-Stop function to the new vehicle for better gas mileage and lower emissions.

Suspension, steering and stability controls will be all upgraded to fully adapt to European car market. Even, the new Ford EcoSport 2018 ST-Line trim will be tuned to for sportier driving dynamics. Suspension, steering and stability controls will be all upgraded to fully adapt to European car market

Front-wheel drive is standard for all variants. If you want to go for an AWD system, wait for the appearance of the EcoBlue motor.

The facelifted EcoSport is produced at Ford Craiova plant in Romania and it is reported to hit both Chinese and European dealers later this year. 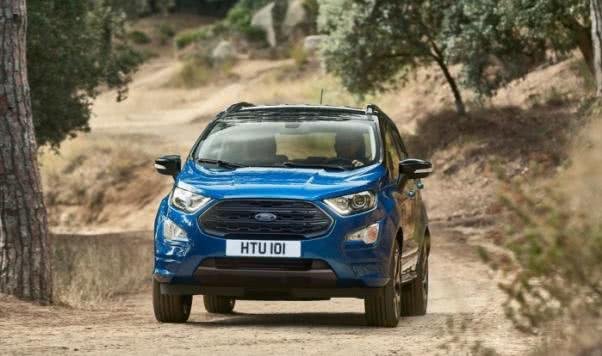 According to the car manufacturer, it will consider more competitive prices for the crossover in order to effectively compete against its rivals as prices’ role in this segment is very important. SUVs buyers are quite sensitive to prices and they would be ready to turn their attention into other models which carry more affordable prices.

Ford has yet to confirm the Ford EcoSport 2018 debut in the Philippines, but opting for a 2017 model is not a bad choice as it features attractive designs, a host of up-to-date functions, fuel-efficient engines and also, attractive prices.

Let’s take a look at the most updated Ford EcoSport 2017 prices in the Philippines in the table below:

To brief our Ford EcoSport 2018 review, Philkotse.com has summed up the pros and cons of this compact crossover in the table below: 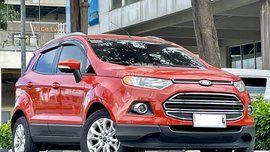