Random Signs and Numbers on the Road: What Does It Mean?

Deciphering those visual reminders and warnings on the road!

Imagine going on a road trip with your family or closest friends. You cruise by on the road, and you see various signs with large numbers painted on them, bordered in black. Or you might come across signs that seem to warn you of something, but they only use pictures instead of words. What do these roadside traffic signages mean?

Let Philkotse.com take you through some commonly used road signs.

1. A trip down memory lane

Back in the days when automobiles were at their infancy, there were no signs or symbols to indicate traffic rules. People were just beginning to discover the convenience of the automobile, with roads spacious enough for pure motoring bliss. As time passed by and more vehicles started plying the roadways, a system became necessary to regulate traffic flow and minimize accidents among road users.

In November 1968, the United Nations Economic and Social Council first drafted and agreed on what would eventually be known as the 1968 Vienna Convention on Road Traffic and Road Signs and Signals. This agreement aimed to produce standard road signage for all signatory nations, including the Philippines.

The idea was to produce a uniform set of road signs and symbols that can be easily understood by drivers from all participating countries, despite the barriers in communication and language differences. Its importance was acknowledged by then-president Ferdinand Marcos, ratified the convention through Presidential Decree No. 207 that provided for the integration of the said convention to the laws of the country.

>>> Must-read: A Deeper Understanding of the Different Road Signs in the Philippines

2. Mandates of the convention

The convention required all participatory countries to utilize a standard set of road signages and symbols on main thoroughfares. As part of this mandate, signs that indicate speed limits shall be indicated using a black-colored number, rendered against a white background for maximum contrast and visibility even from a distance, and bordered by a red circle.

This should be distinguished from another number-based road sign that shows a numerical value enclosed in a black border; that is not a speed limit but a highway destination. For example, the number 55 might indicate the official designation of the National Primary road from Dagupan to Tarlac. If you are traveling to Panay Island, and notice the numbers ranging from 501-525, this is its national designation.

Aside from the typical white background number found on the country’s major highways, you might notice the sign “AH26”. This stands for Asian Highway No. 26, regional transport cooperation spearheaded by the United Nations Economic and Social Commission for Asia and the Pacific. The primary purpose of this sign is to link and coordinate the development of all international highways in the Asian region.

The Philippines was assigned the number 26, representing the route number for the Philippine segment of the highway network. The 55 in this case serves to indicate a highway destination

Here are other types of signs that are commonly used in the country’s roads and highways:

Regulatory road signs tell you what to do and what not to do the road. They indicate what you can do on your next turn, what is prohibited on a particular street and what the speed limit is on a given stretch of pavement. Typical examples of these are the No U-turn sign, No Overtaking sign, No Blowing of Horns, No Entry, One Way, No Parking and Stop signs. Regulatory board signs are enclosed in a red border to communicate urgency and are round in shape. These signs warn the driver of potential risks and dangers up ahead. You will commonly find these signs just before a sharp curve, roundabout, and winding road. Some examples of these are Falling Rocks Ahead, Humps Ahead, Narrow Road, Pedestrian Crossing, Slippery When Wet, Roadwork Ahead, and Two-Way Traffic. These signs are usually bordered with a striking red border and are triangular or diamond in shape. These signs give information that is crucial for drivers. They can indicate where the nearest hospital is for example, point to the nearest parking space, jeepney or bus stop, as well as show the remaining distance to the next town or city. Information signs are adorned with a blue background and are highlighted with a white outline. 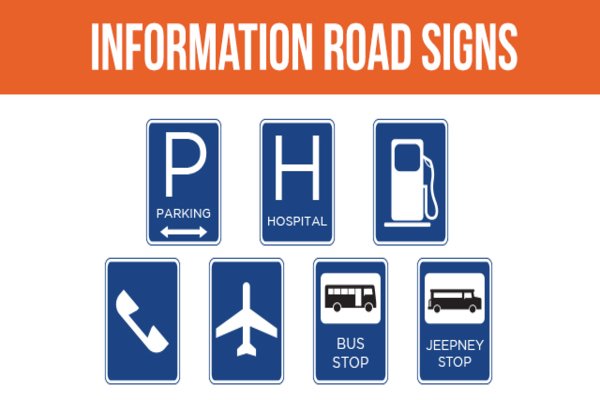 These signs give information that is crucial for drivers

Road signs are essential for making sure that our traffic system runs smooth and systematic. These serve not just to inform motorists but to keep them safe on their journey. Motorists have the responsibility to educate themselves with properly deciphering what these signs mean.

The ones listed above are just the most common that you can see on your day to day travels. It is essential to know what all of them are so that you can be aware of any danger on the road and act accordingly to keep your safe driving.

road signs in the Philippines